Georges Feydeau's A Flea in Her Ear at Williamstown Theatre Festival 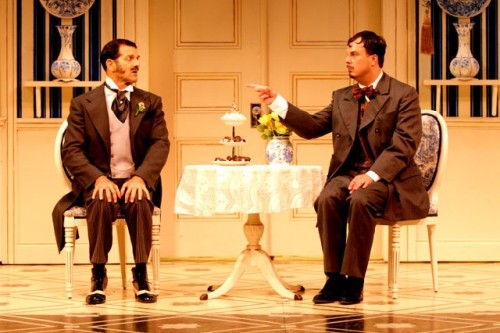 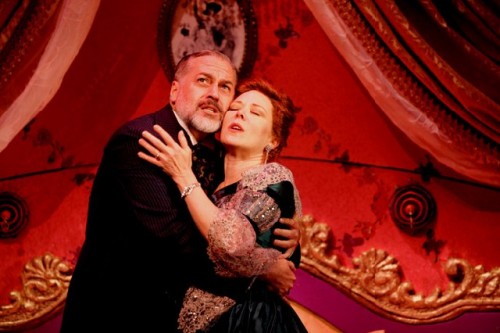 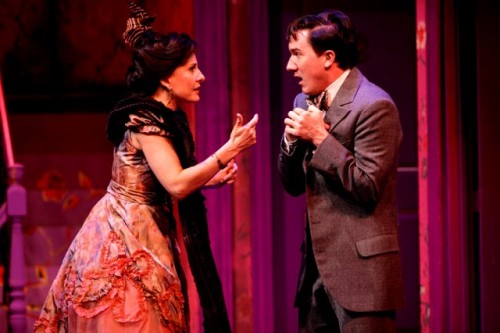 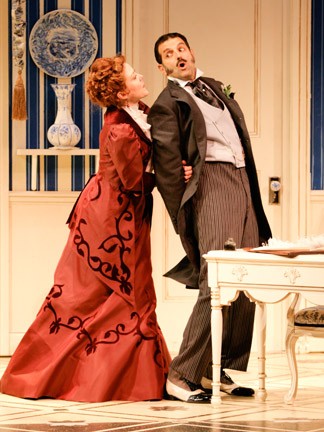 Raymonde wants to find if her husband is missing his suspenders. 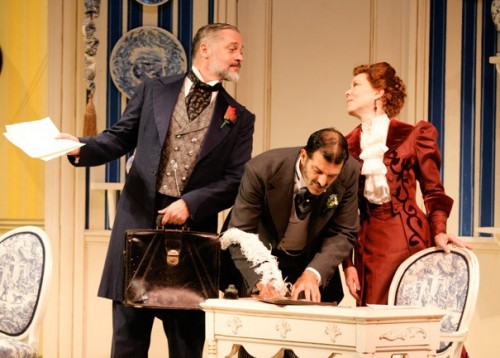 Roman and Raymonde flirt behind the back of the unsuspecting husband Victor. 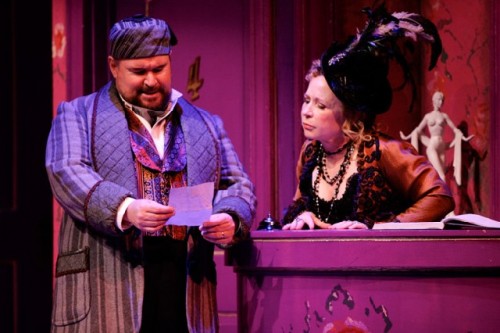 A scene at the Frisky Puss. 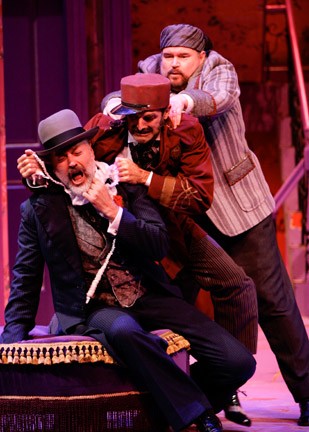 To quote from Virgil, the Latin poet, "De gustibus non est disputandum" (In matters of taste there is no dispute). We start with that notion to consider the 1907 French farce "A Flea in Her Ear" by the master of the genre Georges Feydeau (1862-1921). The hilarious play with a new translation by David Ives opened last night for a delighted audience at the Williamstown Theatre Festival.

This absurd, physical comedy, with all those slamming doors, pratfalls, and colliding characters, including a couple of bared bottoms, entailed some 45 or so twisting and turning subplots. In the midst of all the laughter one needed cliff notes to keep up with just why this or that character is crashing into that one.

Even in this fresh and contemporary translation the context of the play is quite dated and ridiculously French. It conveys much of the national character that takes such delight in all aspects of love, sex, and romance. There are even nationalistic jokes about the British, a randy character named Rugby (Geoffrey Murphy) who has trouble being understood, and a bonkers Spaniard, Don Carlos Homenidesa de Histanqua (David Pittu) so clotted with machismo that he wants to challenge to a duel every man who so much as looks at his wife Lucienne (Mia Barron).

Consider that this play was staged in Paris in 1907. It was the year that Picasso  invented Cubism with the seminal painting "Les Demoiselles d'Avignon" which, like this play in its second act, and a different context, was inspired by a brothel. At the same time Albert Einstein, a clerk in Switzerland, was developing the Theory of Relativity. Even in Paris, today, it is no longer the norm for the bourgeois to frequent brothels and cheap hotels such as the hot sheet Frisky Puss Hotel the setting of the fast paced second act. The hotel manager Ferraillon (Tom McGowan) quips to his wife Olympia (Debra Jo Rupp) that "All of our clients are married just not to each other."

This is actually one of the very few "jokes" in the two and a half hour play. All of the laughs come from the absurd sight gags and comic situations of the characters. One of the loudest laughs of the evening may have resulted from an ad lib to a miscue. The deranged Spaniard demands that a door be opened which the audience clearly sees  is already open. Instead, he slams it shut which brought down the house. It was an inspired moment.

Just what is it about an absurd comedy from 1907, with its ludicrous plots and sub plots, that is so enjoyable to an audience a century later? How does the zeitgeist of the moment conflate with that of a time marked by the progress of modernism and the avant-garde in art and culture? Compared to which a play such as this is reactionary and  bourgeois both in its setting and potential audience. Yes, even in posh Williamstown. The action on stage is arguably reflected by the plots and subplots of the audience although upscale Americans are hardly as deft in matters of romance as the naughty and risquÃ© French. Surely, many in the Parisian audience of 1907 were all too familiar with the remarkable sleaze of the wonderfully designed set of the Frisky Puss Hotel by Alexander Dodge.

The farcical plays of  Feydeau appealed to the escapism of an audience just seven  years before the cataclysm of the Guns of August in 1914. Does that conflate with our need for an evening of absurd comedy during a time of a depressing economy, and wars that drag on at a terrible cost in human life. As Cyndi Lauper put it perhaps "Girls just want to have fun."

It is well established that comedy is much more difficult than drama. The actors must be totally exhausted after every demanding performance. This is a great instance of sweating to the oldies. Do they carb load before every performance like marathon runners? Pass the pasta please.

We also know that comedy, especially farce, is less appreciated than drama. Some of the plays we have seen this summer in a generally superb season, particularly at WTF, linger with us long after the final curtain. But, next day, after "A Flea in Her Ear" it is mostly just poof.  Comedy is so much of the delicious moment. Aristotle recognized and discussed this paradox in his Poetics. It is why so few Oscars have been handed out to comedians. I believe Cary Grant, one of the finest actors of his era, won his for Lifetime Achievement.

During an interview the avant-garde composer, John Cage, the composer was asked if he was offended when the audience laughs at his serious compositions :"I would rather laugh than cry" was his response. We will soon test that notion when we attend a performance of "Waiting for Godot," one of the most demanding of all 20th century plays, at the Berkshire Theatre Festival.

If you would enjoy an evening of pure farce, as we suggested by quoting  "De Gustibus"  well, nobody does it better than WTF. Like everything we have seen this season under artistic director Nicholas Martin there is no scrimping on production values. The sets of Alexander Dodge are amazing. The first and third acts are set in the drawing room of  the business man Victor Chandebise, the walls are choc a bloc with bric a brac. There all kinds of ceramic plates and urns attached to the walls,  which are painted in a dazzling pattern of blue and white evoking Wedgewood and ersatz Adam style. There are decorative plinths and niches. From this bourgeois domain we are off to the Frisky Puss with its riot of violet,  pink and accents of cheap, gilded molding. The costumes of Gregory Gale are stunning. Both the men and women are gorgeously attired in period dress.

The fast paced direction by John Rando is spot on. It takes enormous skill to keep all of those actors crashing and colliding about. It is a wonder that they are not all in rehab by the end of the all too brief two week run of this play.

My goodness, what a cast. It is  challenging to single out individual players from such a superb ensemble. Carson Elrod, was just remarkable at Camille, the nephew, with a speech impediment. How amazingly he garbled his lines with great comic impact. There was a great gag that Dr. Finache, the enormously gifted Brooks Ashamanskas (who also appeared this season in the musical "She Loves Me") designs a device that gives Camille normal speech. Mark Harelik was wonderfully adept at playing both Victor, the allegedly philandering husband, as well as, his doppelganger the drunken night porter Poche. The scheming wives, Raymonde Chandebise (Kathryn Meisle) and Lucienne (Mia Barron) were just delicious. The servant, Etienne, Jeremy Beck (another holdover from "She Love Me') and the lovely Heidi Niedermeyer as his wife, the cook and maid, Antoinette, added nice spice to the bouillabaisse. Roman Tournel (Tom Hewitt), the business partner and best friend who lusts after Raymonde was quite perfect for the role. Kudos to the hotel staff: Farraillon (Tom McGowan), the maid Eugenie (Sarah Turner), Olympia (Debra Jo Rupp), Rugby the brothel client (Geoffrey Murphy), and the old man Baptiste (MacIntyre Dixon).

Just for one night, if you want to escape from the daily grind, nothing quite compares to "A Flea in Her Ear."