At Shakespeare & Company to September 4 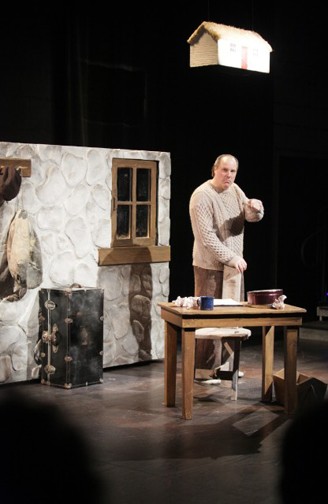 Colm (Walton Wilson) at home in his cottage. 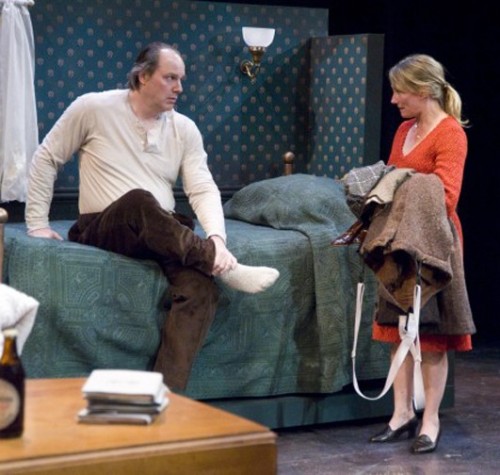 Colm prepares for bed with Timothea (Kristin Wold) in her Liverpool flat. 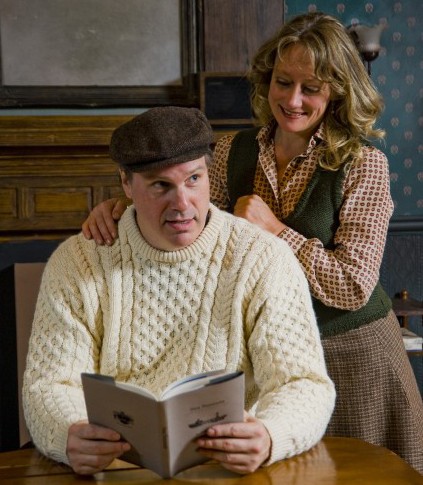 Reading from his book of verse.

Sea Marks is a charming, wee bit of a play written in 1971 by Gardner McKay. Alternating with Mengelberg and Mahler and Bad Dates it is running in the Elayne P. Bernstein Theatre of Shakespeare & Company through September 4.

Colm Primrose (Walton Wilson) is a simple lump of a man who lives in a tiny cottage by the sea on the fictional island of Clifhorn Heads off the coast of Ireland. From his window he looks down on a rocky beach. The rising tide darkens the stones and the high tide line is indicated by Sea Marks.

He has been aptly dressed in crude, ill shaped, homespun pants and a tattered Irish sweater by costume designer Kiki Smith. In an important plot point Colm refers to the sweater as a shirt. He reveals that each village in Ireland has a unique knitted pattern. Worn six days a week the shirt obviates the need for fashion.

Living conditions on the island are primitive. There is no electricity other than a generator that keeps the lights on in the single pub at night. The men belly up for their pints of Guinness  bellowing  tales of the sea, singing ancient shanties. Until the women hover by to lure them home. Those who are married.

There are not quite enough colleens to go about and Colm has never dated. To court means to marry and Colm has never known female companionship. He leads the bachelor’s life scratching out a meager living from the sea when the fish are running. Mostly cod and mackerel. A stew of fish scraps and potatoes is his regular fare cooked in a festering iron kettle.

By chance he enters into an awkward correspondence with Timothea Stiles (Kristin Wold). They may have met briefly but it is never certain.

A Welsh born farm girl she now works in a publishing house in Liverpool.

Like all S&Co. productions there are minimal props to define the setting. On one side of the stage is her mantle piece and gas hearth in Liverpool. An ersatz stone wall and window out to the sea signifies Ireland. Scenic designer, Kiki Smith, has suspended  models of their homes. Above Timothea is a three story brick row house and a thatched cottage represents Colm’s home.

During the first act they read from letters back and forth. In his awkward, probing way Colm becomes more intimate. Eventually, asking if she will attend the wedding of a remote relative? She does indeed and there is a clumsy meeting behind the church. There is the prop of an Irish cross to indicate the cemetery.

Lacking skill in how to romance a lady Colm is swigging poteen the home brewed equivalent of our Appalachian white lightning. He offers her some. There are several rounds. She from a tea cup and he swigging from the bottle. It loosens him enough to agree to visit her in Liverpool. She must be back to work on Monday morning.

By the beginning of Act Two Colm had arrived in her small attic flat. It’s the 1960s. The sound designed by Michael Pfeiffer has switched from the Celtic music of the island to early Beatles. Other than this hint of the Fab Four there is little indication of the rock ‘n’ roll life. It is unlikely that the straight laced, conservatively dressed Timothea has ever visited the Cavern Club.

In many aspects she is as much an anachronism as he is. Why else would she be attracted to such a lunk of a man? Ah, it’s in the prose. It seems that although he can barely write in those clumsy, heart felt letters, Colm has that Irish gift of the gab. She finds poetry in his sincere descriptions of the hard, seafaring life.

Colm observes that there is a single small bed. It creates a crisis. In stumbling phrases he blurts out that though a man in his 50’s he has never known the scent of a woman. The prospect of intimacy is terrifying. She is knowing, eager, and tender.

We find him in the middle of the night huddled sitting with a blanket. Turning on the light she asks what is wrong. The intimacy it seems has been a disaster. He will, of course, as men do, quickly get over this. Soon they are settled into a domestic arrangement. Particularly as she cooks fine meals and bring home pints of Guinness. During the day he wanders a bit about the neighborhood and finds the pub. There he almost gets into a brawl, that British/ Irish thing. But he explains to her there is no point in fighting with strangers. That is best done with friends.

Soon, although by now he loves Timothea,  Colm is a fish out of water. What is there for him to do in Liverpool? The British are reluctant to hire the Irish and he knows no trade other than fishing. We find him trashing about more and more longing to be home and helping out with the fish soon to be running. Who will help his dad?

One night along with the groceries she brings him a present. She wants to give it to him after dinner. And is not sure he will like it. Like a big kid he is excited and wants to open it.

The present proves to be a book. A slim volume of verse. She urges him to read from Sea Sonnets. When he does he is astonished and furious to find that it is his own prose. Edited and presented as poetry. He has never thought of himself in that way. What will his friends think with him going and putting on airs? He asks what’s a sonnet? A poem she says. A better title for the book would be Sea Marks. Then he sees the author’s blurb that describes him as a primitive. And a price of half a pound.

Initially he is furious. But she prevails how much his writing is admired by her boss the publisher. There are plans and ambitions. Speaking engagements, TV appearances, book signings. The prospect of making a living. The publisher has even supplied a packet of some 500 sheets of paper. He is to sit at home all day and write.

But how can that be in a flat in Liverpool when he longs for the sea.

There are some wild twists and turns. Her ex husband a con man shows up. It seems that he and Colm drink the day away. A nice fellow he says confronting her about being married. He even works for the same company.

Timothea tries to dress up her rough poet. To make him wear a decent pair of pants. She cleans his “shirt.” He is surprised and comments “I never knew it was white.”

On the day of his first schedule reading things run amuck. While she is on the phone assuring that he will appear Colm staggers in three sheets to the wind. He wallows about not wanting to do the reading or any other of her plans. In the squall that ensues Colm bellows about receiving a letter. His dad has drowned at sea. It’s Colm’s fault for not being there for him.

In the final scene Colm does indeed give the reading. At the podium under a spotlight he delivers a deeply moving soliloquy. Instead of reading a poem he tells the tale of drowning at sea. How the fish eat the eyes and nibble away the lips. When the corpse does wash up there is nothing left to identify. Except the shirt which signifies the village of the deceased. It is the only way to trace the victim.

Although Colm never reads a poem his spontaneous discourse is pure poetry. Which is indeed the point of this modest and poignant play. It ends with him back home in his cottage. Their correspondence continues. This will of course be edited as the poetry of his next thin volume of verse. We assume he will visit when the fish are not running. And she will spend her annual week of vacation on the island.

This is indeed a love story. Such a heart warming and charming tale. It brings out the Irish in me and the longing to visit the old sod. There to drown with my ancestors in a sea of Guinness. To sing, brawl, and tell tall tales. Ah the blarney gift of the gab.