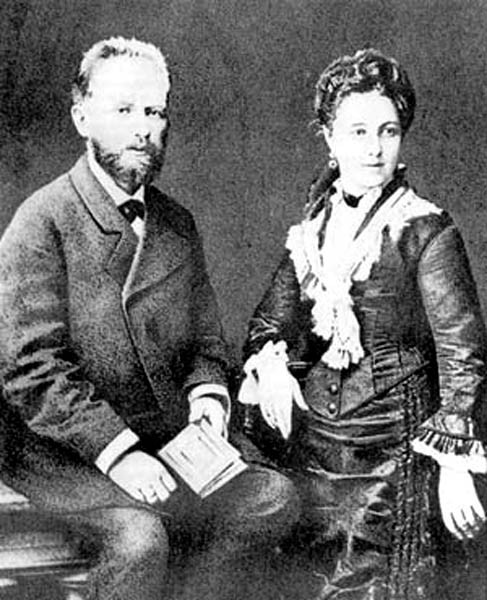 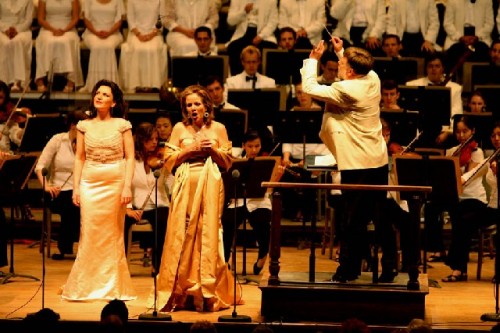 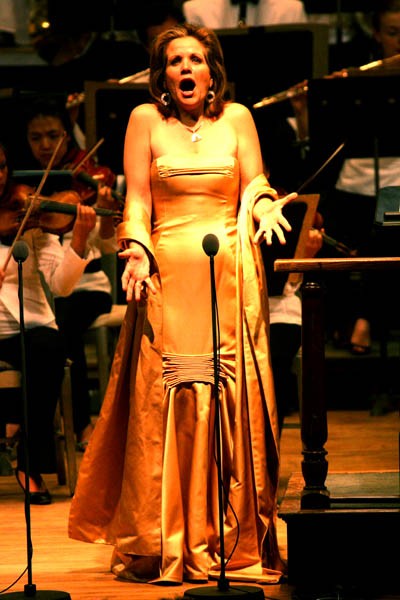 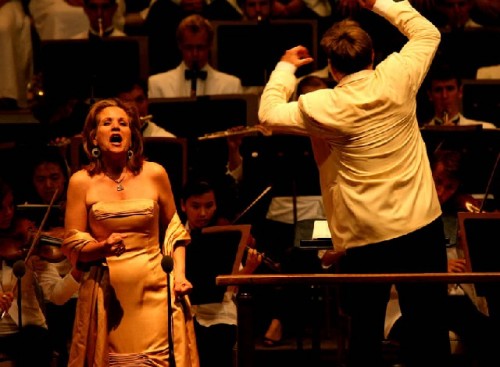 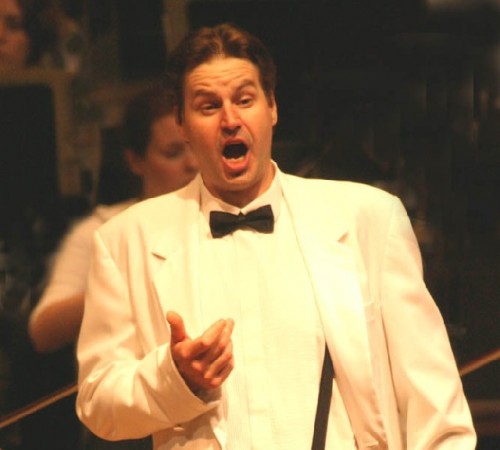 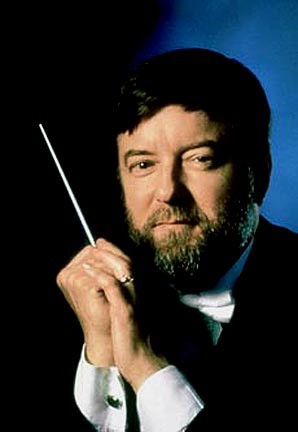 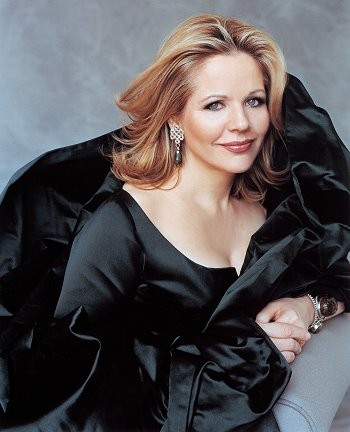 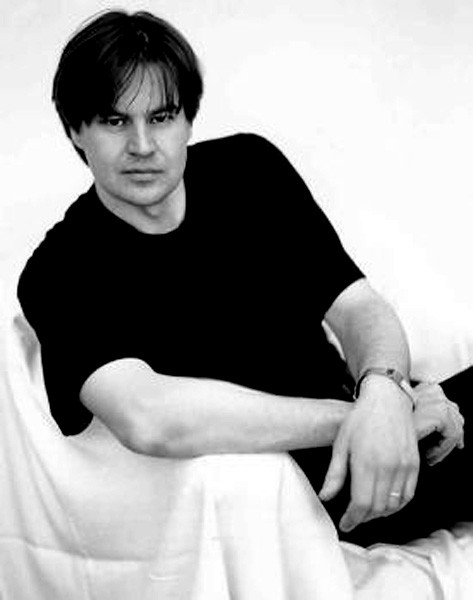 Peter Mattei made his Tanglewood debut as Eugene Onegin. 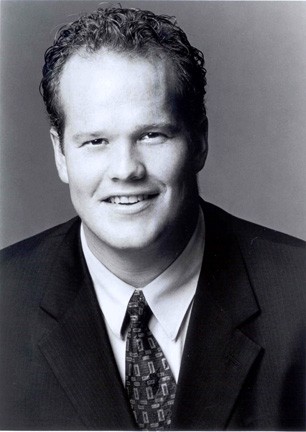 Garrett Sorenson was Lenski the doomed friend of Eugene Onegin.

In assembling the program for the 2008 Tanglewood Music Festival the artistic director, James Levine, intended to perform more opera. The season opened with his massive production of "Les Troyens" by Hector Berlioz over two days. While attendance was less than anticipated it was widely regarded as a critical triumph.

Shortly after opening the season Levine withdrew and underwent surgery to remove a cancerous growth on a kidney. The BSO reports that he is recovering and is on track to resume duties in Boston as well as with the Metropolitan Opera Company.

The second concert opera of the season Pyotr Ilyich Tchaikovsky's "Eugene Onegin" was performed as scheduled last night with guest conductor Sir Andrew Davis, starring Renee Fleming as Tatiana, and Peter Mattei as Eugene Onegin. One may only speculate how Levine would have treated the opera. Based on the tumultuous ovations at the climax of the performance it would appear that the capacity audience, in the Koussevitzky Shed and the somewhat sparse audience on the lawn (yet another inclement evening), greatly enjoyed the performance.

Certainly Renee Fleming, one of our leading contemporary sopranos, more than lived up to expectations. In one particularly poignant aria, in whish she agonizes over a letter declaring her love to the womanizing, arrogant Eugene Onegin, it was so moving that the outburst of applause caused the conductor to pause and acknowledge the spontaneous ovation.

Since only a small increment of the audience is fluent in Russian it was helpful to have a continuous translation of the text projected above the orchestra. Once again we marveled at the ability of the Tanglewood Chorus to sing so effectively in yet another language. Compared to the numerous  operas in Italian, French and German it would seem unique for singers to also be fluent in Russian. "Eugene Onegin" was Tchaikovsky's fifth opera.

Tchaikovsky evoked a Russian theme suggested by a popular novel of Alexander Pushkin with a libretto in his native language. Aspects of the drama seem to be an alternative to the theme of "Anna Karenina" which was published in intervals starting in 1873. The Tchaikovsky opera was first performed several years later in 1879.

In Count Leo Tolstoy's novel the married woman, Anna,  is ruined by leaving her husband and having an affair while Tatiana, as a married woman, declines Onegin's overtures. In Tolstoy's novel it is the woman who is ruined, while in the opera, Tatiana remains faithful to her husband, despite the lure of love. It is the seducer, Onegin, who is left in shambles. In the protocol of the period affairs were common and acceptable if conducted discretely.

In another Russian parallel Onegin is a smarmy scoundrel and anti hero who may be compared with the sociopathic character of Fyodor Dostoyevsky's 1864 "The Underground Man." There are also conflations with the earlier romanticism of Johann Wolfgang von Goethe's 1774 "The Sorrows of Young Werther." Onegin, like Werther, suffers terminal boredom and ennui. While Werther committed suicide Onegin callously murdered his best friend.

Combining these other literary sources and parallels we find in Eugene Onegin an unpleasant, arrogant, self absorbed, world weary, effete, and petulant young aristocrat. Is he just boorish and ill mannered or an ersatz proto existentialist like the Underground Man? Is Onegin embedded in the romantic tradition of  Goethe's Werther? In any analysis he is an unsympathetic cad. It is stated about him that he lacks the grace and manners appropriately to kiss a woman's hand.

The major theme of the opera is a contrast between virtue and a lack thereof. Onegin rejects out of hand the innocent love of Tatiana. Despite her sincere passion he is cold hearted and scolding. While flattered and amused Tatiana is too much an innocent country girl lacking in social status and wealth for his ambition. That he has coldly broken her heart, as well as delivered a little sermon warning her against potential seducers such as himself, is of little consequence. Having dealt with her as a trifle he then amuses himself by deliberately provoking his friend Lenski (Garrett Sorenson)..

Just for the perverse pleasure Onegin charms and seduces Olga (Ekaterina Semenchuk), the sister of Tatiana, and fiancÃ© of his friend. The ease with which he interferes is infuriating and insulting. Lenski has been betrayed, disgraced and humiliated by his best friend. Ongein, the swine, has no motive beyond womanizing momentary distraction. He adds further insult by showing up late for the duel he provoked. Lenski's second states quite clearly the honor and traditions involved when gentlemen demand satisfaction. Onegin is casual and disrespectful causing further insults. The outcome of this disgraceful incident is that Onegin killed his best friend.

After the years of aimless, restless wandering in which Onegin is the paradigm of the wretched romantic, a man without honor, character, and purpose, he arrived as an apathetic participant at an elegant ball. It appears that Tatiana, just two years prior, had married well to Prince Gremin (Vitalij Kowaljow) a relative of Onegin's. There is a strained and brief introduction to Tatiana (they ackowledge having previously been neighbors). This was followed by an exchange between the two men in which the husband pours out love for his wife.

Given that Onegin is a cad this falls on deaf ears. It is only in hindsight that Onegin realizes that he has loved Tatiana ever since he callously rejected her. They had a chance to be happy and he was blind to the opportunity. Just as he toyed with the engaged Olga, with tragic consequences, he intends to seduce Tatiana now that she is less available and more desirable.

In a powerful exchange at the end of act three Onegin manages to wrest from Tatiana a confession of her continuing love. That said, as a virtuous woman, she proclaims that she will never betray her husband.

Even though this is an opera about the male character Eugene Onegin, in this performance by Renee Fleming, it is clear that Tatiana is the real focus and the more crucial role. Fleming brought to it superb passion and nuance. We witness great growth and character development from the innocent, smitten young girl, at the beginning of the opera, who evolved into the strong, vulnerable, but morally impeccable, married woman in the end.

The handsome and swaggering Peter Mattei was wonderful in inspiring our disdain. He was  a handsome devil in every sense. Mattei's voice was magnificent, but, as is so often the case with opera, the acting might improve. For starters,  it would have been good to have him at least look at Tatiana when she was pouring her heart out to him. Garrett Sorenson was effective as the simple, trusting, loving Lenski. There was a visual contrast as Lenski was just an ordinary guy compared to the debonair Onegin. But Lenski displayed firm character in standing up for what he believed in even at the cost of his life. Such was the price of honor in the 19th century.

In composing the opera comparisons have been made to Tchaikovsky's complex personal life including a brief, sham marriage to Antonina Milyukova. Like Tatiana, she was an acquaintance who over time confessed her love by means of a letter. This is what led him to read the Pushkin novel which inspired the opera. While he married Antonina, as a closeted homosexual, he was not inclined to consummate the relationship. Surely much of his own conflict is written into the opera and its wonderfully rich and expressive music.

Given the overwhelming success of this staged opera let us hope that the experiment is repeated when Maestro Levine plans the program for the summer of 2009. This fifth opera by Tchaikovsky was last performed at Tanglewood on August 17, 1974 conducted by Seiji Ozawa. Last night it was wonderful to welcome back this great work.