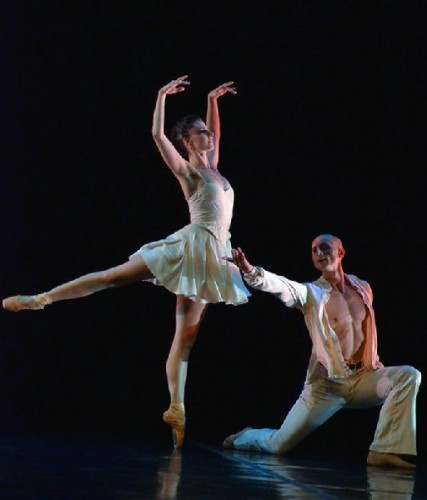 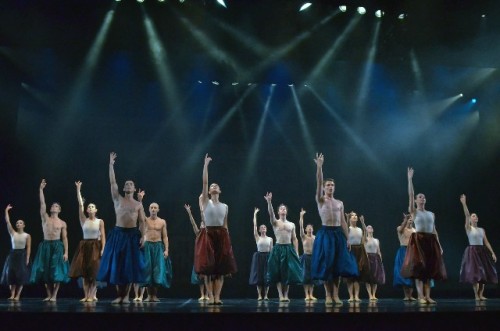 The stage with twenty dancers for Carmina Burana. 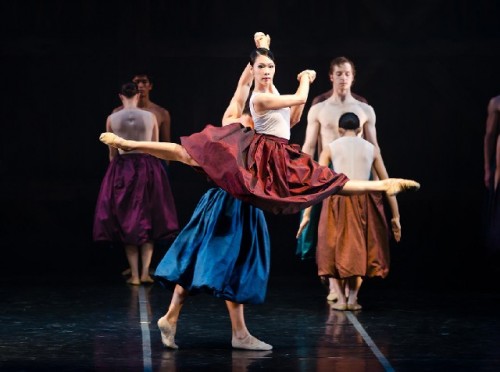 From Fortuna of Carmina Burana. 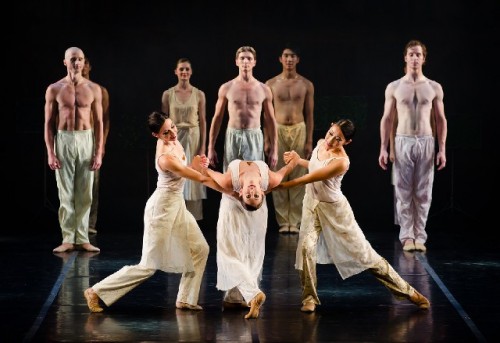 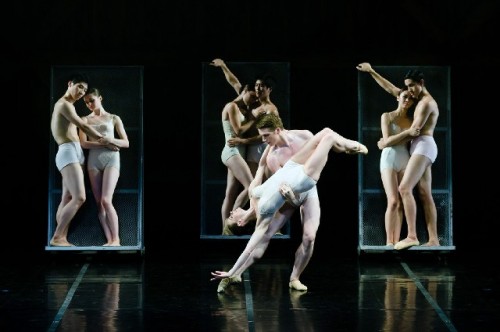 Pairs of lovers in Cours d’amour from Carmina Burana. 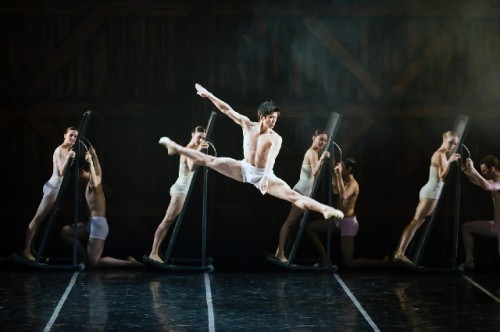 Thanks to Oh Canada at Mass MoCA, a major survey of contemporary Canadian art this summer, we have come to learn a lot about our neighbors to the North.

For its 80th season, artistic director, Ella Baff, informed the audience last night at Jacob’s Pillow, that she strove to program some “special treats.” She has a particular interest in presenting the best of many classically based ballet companies. This resulted in a return, after a daunting interval of some 50 years, of the Royal Winnipeg Ballet.

The Royal Winnipeg Ballet was granted its royal title in 1953, the first granted under the reign of Queen Elizabeth II. It completed its first American tour in 1954. In June that year the RWB's rented premises were devastated by fire; the company's entire stock of costumes, original music, choreographic scores and sets was destroyed.

Winnipeg, the capital of Manitoba, with a population of  684,100 (2010 census) is located in central Canada north of Fargo, North Dakota. While Fargo, a city of 105,549 with three universities, is hardly bereft of culture, consider its Canadian neighbor. Its resources include: Manitoba Theatre Centre, Manitoba Opera, the Royal Winnipeg Ballet, Winnipeg Symphony Orchestra, Manitoba Museum, Winnipeg Art Gallery and Le Cercle Molière. Some of the city's popular festivals are the Festival du Voyageur, the Winnipeg Folk Festival, the Winnipeg Jazz Festival, the Winnipeg Fringe Theatre Festival, and Folklorama.

The dramatic difference is that the Canadian government supports the arts as a quality of life issue even in its remote, frozen provinces. The majority of Americans, particularly in the current congressional log jam and budget crunch, regard government supported culture as a luxury we cannot afford.

How else to explain the magnificently trained and artistically ambitious company we experienced last night from, well, the middle of nowhere?

Yet again, we were presented with the conundrum of how can a company be rooted in the austere and demanding traditions of ballet and yet be fresh and contemporary? The program in three sections addressed those familiar concerns.

Perhaps the easiest and least contentious starting point was the second piece in the three part program.  Moonlight Sonata (2001) choreographed by Mark Gooden, an excerpt from a larger work set to “Moonlight Sonata” by Ludwig van Beethoven, was a traditional pas de deux, with all the familiar lifts and romantic embraces, serenely executed by the stunning pair of Jo Ann Sundermeier and Harrison James. While there were few surprises it was a wonderful and familiar interlude in an otherwise challenging and polarized program.

For me, and I am likely out of sync with the taste of the audience enthralled by the spectacle of Carmina Burana, I found the first selection In Tandem (2009), with choreography by Peter Quanz set to “Double Sextet” by Steve Reich, the evening’s most intriguing and unique dance.

Reich, who performed here recently as a part of the annual Bang on a Can festival at Mass MoCA is known for staccato, percussive, minimalism. The music gets into and rattles your body titubating through our bones. It was delightful to have that pulse and hypnotic energy channeled through four women and two men. The entrances, in which the women twirled on stage en pointe were particularly enthralling. The mismatch of more women than men was Mormonesque with its emphasis on their testosterone. There was a sharp contrast between the polarized sexual energy with the women elusively, enchantingly graceful, and feminine. The piece was enticingly flirtatious.

The music of Reich is relentless and one must be well attuned to catch its pulsing, subtle shifts. But that heavy, clustered, chunky rhythm is infectious when set to dance. Here we enjoyed a perfect confluence of traditional ballet and contemporary choreography. It just made sense in a compelling and infectious manner.

The full bore exposition of the ever popular Carmina Burana clearly absorbed and delighted the audience. It is difficult to resist the pulsing, percussive, brassy score and brilliant balance between chorus and soloists. Like Reich’s music it just begs for choreography.

While audiences are mesmerized by the singing most of us haven’t a clue about the meaning of often bawdy lyrics in medieval Latin which Carl Orff set to music in 1935-1936. Pillow might have provided more detailed program notes of the five sections- Fortuna I, Primo Vere, In Taberna, Cours d’amours, and Fortuna II- with their very different themes. When Carmina Burana was performed at Tanglewood, a couple of years ago, the program was more richly detailed. I think you owe it to the audience to let them know what’s going on in such a complex but oddly familiar work. The programmatic music is so catchy and recognizable that it shows up frequently out of context.

The dance we saw last night was undeniably charismatic but also suffered from overkill. With some twenty dancers on the less than vast Pillow stage for the opening and closing sequences of Fortuna I and Fortuna II there was a glut of dancers and resultant visual clutter. This was compounded by over the top costuming with enormous, puffy, taffeta skirts for both sexes. The men were bare chested. The dance seemed to just rote the music, in some kind of marshal manner, beat for accented beat. At times with clapping, percussive, hand gestures. The skirts, designed by Carlos Gallardo, were interesting for about a minute then just seemed gimmicky after that.

It was a relief to have a mood and costume change with the less cluttered second segment Primo Vere (Spring). Here the combinations of soloists and couples were more visually palatable in softer more natural white attire. But, again, there was a gimmick. Nature simulated by a series of music stands collaged with a variant of vegetation carpeting. Huh. These were set up with spacing at one point and the dancers circling about these abstracted signifiers of nature.

For me, and here I disagree with another critic, I found the segment In Taberna most satisfying. The costumes of softly toned unitards and jackets with caps for the men reminded us of the medieval premise of Carmina Burana. We assume bawdy lyrics for the raucous drinking scene. The choreography seemed more apt, simple and expressive.

Cour d’amours which followed evoked tender romance. Indeed the dancing was enchantingly lovely. But the costumes were distracting. It just seemed like the men were attired in Calvin Klein white briefs matching the generic foundation garments/ lingerie of the women. Sorry, but it just didn’t look right. Like why were the dancers performing in their underwear? And not even Victoria’s Secret! Costumes are supposed to enhance not distract from the dance.

This part of the dance also included intrusive, non sequitur props. They were wheeled to the back of the stage in profile. When turned around we found individual male dancers looking through tilted screens. Later they caught women, then couples, combined in framed static embraces. It was a backdrop for pairs of lovers.

The finale of Fortuna II thunderously echoed the opening sequence.

This brief exposure to the company leaves us hoping for frequent return visits. We would love to know more of the range of their work. It also entices us to visit Winnipeg and enjoy its diverse cultural attractions.