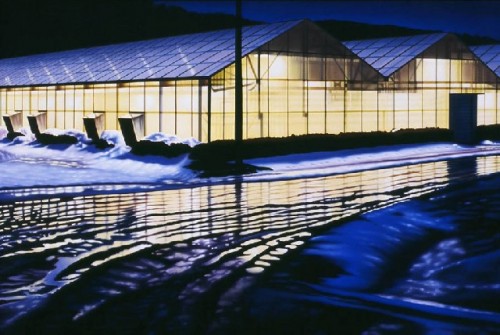 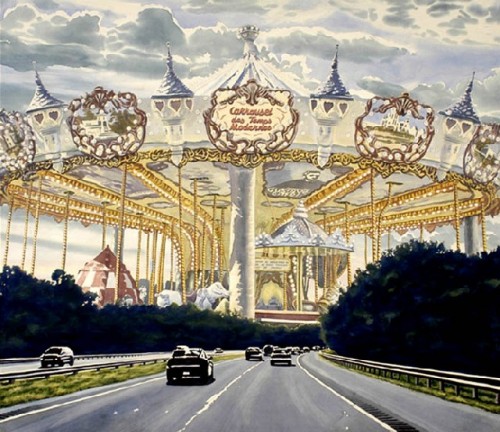 French Carousel Over the Mass Pike by Robert Morgan. 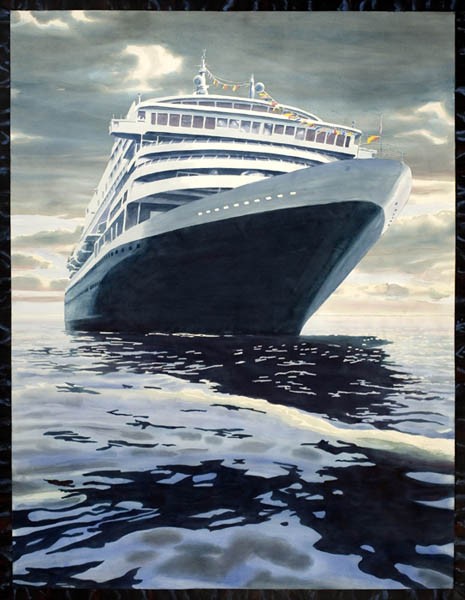 Cruise Ship in Amsterdam by Morgan. 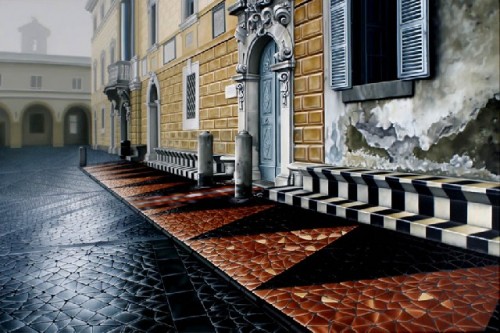 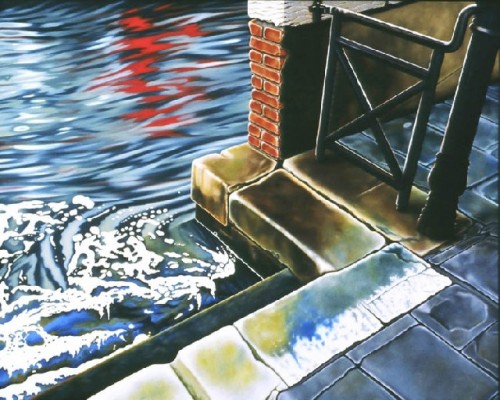 Past the Past, Venice, by Brantley. 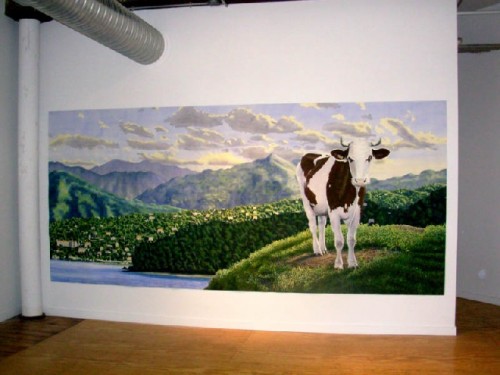 Morgan’s French Cow on Vacation in Italy takes up the width of a wall. 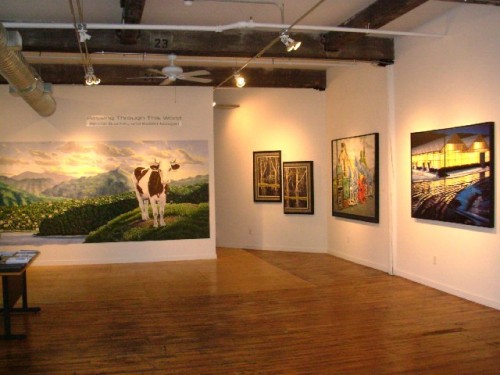 A view of the Eclipse Mill Gallery. 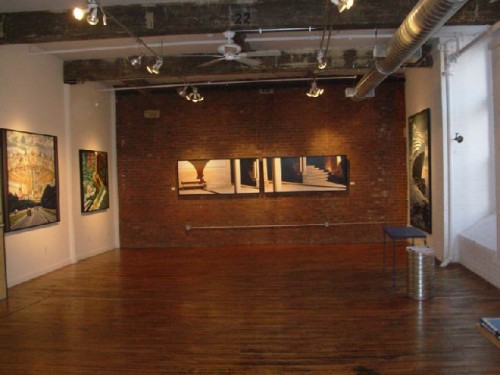 Looking toward the brick wall. 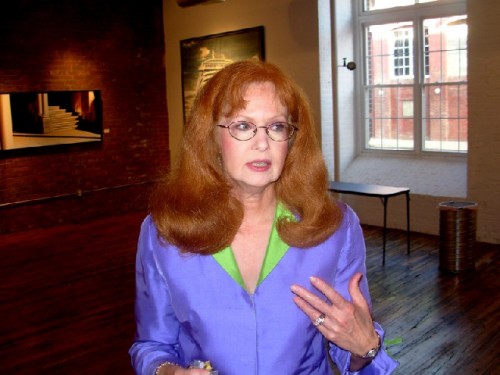 Pennie Brantley during the reception at the Eclipse Mill Gallery. 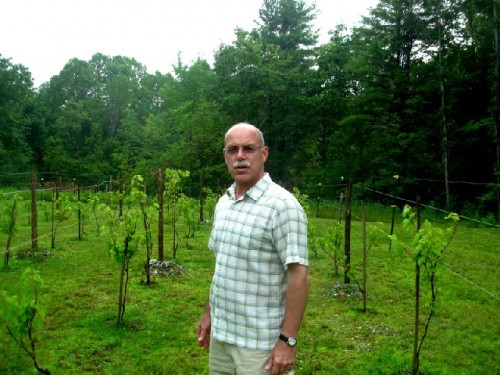 The artist Robert Morgan at home in his three year old vineyard.

The artist couple, Pennie Brantley and Robert Morgan, share a passion for representational painting and travel. They spent several years in Argentina and the works in the current exhibition, aptly titled "Passing Through This World" are based on sites they have viewed and meticulously rendered in Europe and Latin America.

The artists live in New York State just over the line from Massachusetts on the road to Troy. They are a relatively short drive from North Adams. When we first interacted at Mass MoCA I recalled Pennie from her work with the AIDS benefit Artcetera in Boston which she took a turn at organizing. Both she and Bob had long been associated with the Bromfield Gallery, a Boston cooperative.

The project to show their work at the artist run Eclipse Mill Gallery in North Adams evolved over the past several months. While the space, one of the finest non profit galleries in the Berkshires, is primarily focused on showing the work of its residents, there is also a mandate to reach out and provide opportunities for the many artists in the region. Overall, there are too few such venues for a thriving and ever expanding community of artists to show their work. This exhibition represents a serendipitous confluence of outstanding artists showing in a setting adequate to fully display and enhance the large scale and ambition of their paintings.

They applied for a slot in the current schedule. Once they were approved by the Gallery Committee they measured the space and planned for a selection of paintings. Morgan created a wonderful panorama, watercolor on paper, mounted on canvas "French Cow on Vacation in Italy" which at 84 x 174" fits quite neatly on the widest wall in the gallery. The opposite brick wall, an enigma for curators, has been hung with a horizontal diptych by Brantley "Espero/ Wait (Baeza, Spain)" on the left and "Enlightenment (Baeza, Spain)" on the right. Both paintings are 30 x 72."

For the most part the installation went according to plan. But, as so often happens, there were adjustments, as works got switched around during the hanging. While certain paintings and dimensions may make sense on a floor plan it is often quite another matter once the actual works are moved about. Overtly the artists work in a similar manner,  but there are differences and the challenge was to create an exhibition in which the works interact and enhance each other. Brantley  favors meticulous detail, architectural motifs, dramatic light, and saturated color. It is a crisp, sharp focus approach to painting.  Morgan, with watercolor on paper applied to canvas, employs a softer brush stroke and more muted palette. He also likes to evoke aspects of the surreal combining the observed and fantastical such as the compelling and amusing "French Carousel Over Mass Pike."

While the artists come to representational, large scale, paintings with different sensibilities the resultant exhibition is powerful and lush. This is an unique Berkshire opportunity  to experience strong and technically well executed paintings. Many of the visitors to the gallery have been floored by the drama and quality of the work.

It is impossible not to be seduced, amused and charmed by Morgan's panorama of the cow on vacation. The scale of the piece invites us to imagine that we are standing on a hill in Italy looking off in the distant mountains at a village while that cow in the foreground munches its cud with a look of serene contentment. I asked Bob if the cow was actually as clean and pristine as we encounter it in this panorama? It was Pennie who responded that cows in fact are quite filthy. This one appears to have been primped for the occasion. For that we allow Morgan artistic license. Or, to paraphrase Gertrude Stein "A cow, is a cow, is a cow." Moo hoo.

Brantley's works such as "Morning Fog, Orvieto" evoke a high finish, saturated chroma, and intense execution. It is not surprising to learn that is takes a long time to create such detailed and finished work. The image is a horizontal slice of an ornate building in the Italian city. To the left of the composition we view a pattern of stone paving in a complex perspective. To the right, and on the top, is an expanse of a building with its entrance. There is a patch of wall in a state of highly articulated disrepair. As the perspective leads our eye into the painting in the distance we encounter the collonaded facade of another building. This is muted and softened with a virtuoso treatment of light that conveys an encroaching fog. There is dramatic play of the sharp edges of objects in the foreground and a muted feeling as the picture plane gradually recedes. Bravo.

While Brantley takes the approach of straight up representation there is more conceptual manipulation in Morgan's work. He often uses the device of framing his works with borders making us more aware that we are looking at a painting than being drawn into the illusions of a trompe l'oeil. The work makes us think of the Magritte approach of a rendering of a pipe with a painted text that proclaims "Ceci n'est pas une pipe." We are informed by the surrealist that this is not a pipe but rather a painting of a pipe. This layering of intentionality gives Morgan's work a conceptual edge.

Contemplating his "Argentine Horse at Mexican Carnival" in which a horse is set behind a collection of wrapped carnival items awaiting assembly or transportation we wonder about the horse. Was that a real horse in the composition or rather a carved, life sized rendering of one? And just where is that enormous "Cruise Ship in Amsterdam" headed?

Brantley,  in her more literal approach, also encourages our speculation as to the meaning and intent of the work. On one level her "Protecting Our Inner Selves from Encroachment (Berlin Greenhouse)" seems straight forward. It is a night view with an exterior of slushy, melting snow in which the greenhouse is lit from within. Although simple and dramatic both as object, and for its treatment of artificial light glowing through glass walls, we also wonder why? Just what drew the artist to this image and how best to respond to its enigmatic irony? Compared to her other paintings it is slower to reveal its secrets.

As is often the case with the best contemporary realist artists what we see is not necessarily what we get. To succeed as a work of art there must be a progression both for the artist and viewers that takes us  beyond perception. If the only experience is strictly visual, however seductive and satisfying, there is the risk of fitting Marcel Duchamp's critique, in the early part of 20th century, when he stated that "Painting is too retinal." Indeed, and his Dada approach continues to influence generations of conceptual artists. But a century later artists like Brantley and Morgan evoke the transavant-gardist approach of a return to John Ruskin's dictum of "Truth to Nature."

After more than a century plus of the dominance of the avant-garde, in an era of post modernism, artists have been liberated from the conformity to Isms. There is a freedom to pursue whatever challenges them. Hence the return to aspects of representation that were regarded as anathema by Duchamp and the avant-garde. In that sense making highly rendered, representational work is a form of guilty pleasure; both for the artists, and their audience. Serious and committed contemporary realist artists come to their approach with a full knowledge and appreciation of modernism. It is not a return to the rejected salon values. There is an understanding that realism must be approached in a manner that transcends the impulse to create eye candy.

When Photo Realism first emerged in the 1970s there was, indeed, a reactionary aspect which encountered the negative response of critics. We have subsequently outgrown the trend of mindless renderings of gum ball machines, motorcycles, or neon signs that initially invited scorn for photo realism. The works of Morgan and Brantley evoke a growth to a new paradigm of representational panting where there is considerable thought about subject matter and rendering that is more than "retinal." Progress is our most important product.