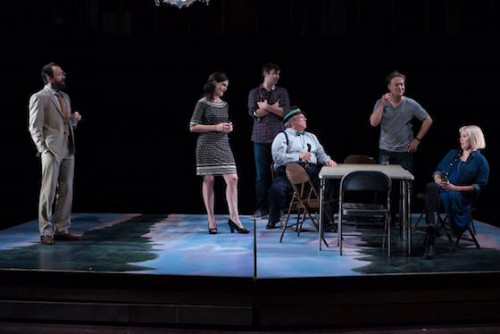 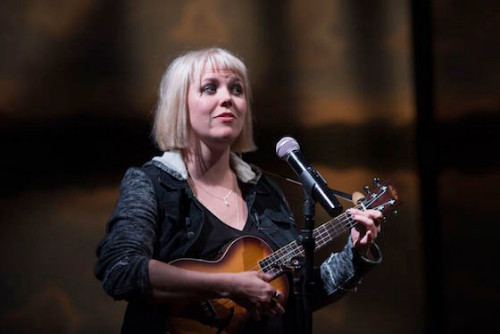 Early in Anton Chekhov's The Seagull, Konstantin, the tortured artist playwright, laments the need for new expression in theater: "... to my mind, the modern theater is nothing but tradition and conventionality." I mused about that speech during Sideshow Theatre's Stupid Fucking Bird and decided Konstantin would have liked this production, even though Con, his counterpart, is still raging about the need for new expression in theater.

You might think Aaron Posner's 2013 script, Stupid Fucking Bird, is kind of a modernization of Chekhov's original. The seven characters are kind of related to the Russian originals. The story line sort of follows Chekhov's. A seagull appears in different forms throughout the play. But the language, costumes, attitudes and pop music interludes make it an entirely different show.

SFB is a delightful two hours of smart theater that you'll enjoy even if you haven't seen The Seagull more times than you can count. The playbill provides a brief summary of the original, "in case you forgot." Director Jonathan L. Green, who also directed Sideshow's 2014 version, creates a minimalist production that uses original and contemporary pop music and breaks the fourth wall at will to talk with the audience.

The new production, like its Russian original, is a story of love, yearning and (mostly) failed relationships. A loves B who loves C who loves D who flirts with E who is the lover of F. Some of it turns out all right in the end.

The play begins when Con walks on stage and says, "The play will begin when someone says: 'Start the fucking play'." After an instant of hesitation, an audience member does, and the play starts. In case the title of the play hadn't already provided a clue, the script contains so many verbalizations of the F-word that if you were sensitive to it at the beginning, by the end, it will be just another adjective. Or gerund or participle.

Con (Nate Whelden) has written a "site-specific performance event" and is presenting its first showing ("it's not a rehearsal") to an audience of family and friends. The lovely Nina (Nina O'Keefe), who wants to be an actress like Con's mother, Emma (Stacy Stoltz), dons a flowing white dress and mounts the platform in the playing space to declaim the work in progress titled "Here We Are." She begins,

This is real, this is true,
This is new, this is now...
A new place.
A liminal space,
A place of grace
And the boundless pursuit
Of beauty

(If you've seen Christopher Durang's Vanya and Sonia and Masha and Spike at the Goodman, the scene will be familiar.)

The showing is interrupted by Emma's snarky comments and ends after only a few minutes of Nina's narration. Con is devastated because he wanted to impress his mother, who thinks the text was meant as a criticism of her and the type of theater she performs in. Actually, everything is about Emma, in any scene in which she appears. Her lover, Trigorin, the famous author (played by Cody Proctor), is taken by Nina's beauty and Nina is impressed with his fame.

Con is not only devastated by his mother's criticism; he yearns for Nina's love and at one point, asks the audience for suggestions to get her to love him. Whelden's performance as Con is the strongest of the production; one really feels both his hunger to be a successful artist and to gain Nina's love.

Dev (Matt Fletcher) is Con's friend and supporter and loves Mash (Katy Carolina Collins) who loves--well, you know. Mash is Emma's cook and helper and also plays a mean ukulele in an opening song and throughout the play. Dev occasionally accompanies her on guitar. Mash's tirade to Trigorin against the modern world in act two is a treat.

God is dead... or otherwise engaged... or... and our "leaders", so-called-- even the best of them--are errant fucking knaves or wildly self-serving pricks, drunk with power and riches and wielding sway with an arrogance and hypocrisy beyond the power of poets to name... that the whole fucking game has been bought and sold a dozen times to the highest bidder and that the course towards destruction has been set.

Sometime in act two, it's four years later. Dev and Mash are married and have several children. Trigorin's flirting, encouraged by Nina, has turned into an affair.

Con is still lamenting his writing and his loss of Nina, but he has a play in production. The title? "Stupid Fucking Bird." Because this is a play within a play and the actors know they are in a play as well as in real life.

But even this hasn't made Con happy. "You know what fucking sucks about a little success? It just feels like a set up for a new kind of failure. A more painful kind. Because now instead of just my family, I'll get to have, you know... perfect strangers judging and pitying me, too."

Nina does return and in an awkward conversation with Con tells him that she thinks she's a seagull. The play ends with a meta-theatrical version of Chekhov's ending, involving, yes, Chekhov's gun.

Green takes full advantage of the eccentricities of Posner's script to create a world of contemporary angst and irony. His actors perform superbly, including moving around pieces of Joe Schermoly's modernist but minimalist set design as scenes change.

The original music and pop music chosen by Christopher M. LaPorte add elements of humor as well as rhythm. During the walk-in music, Joy Division's "Love Will Tear Us Apart" is a portent of the drama to come. Mash's songs on ukulele include Beyonce's "Crazy in Love"; "Addicted to Love," the late Robert Palmer's 1986 soul rock song; and the Eagles' "Desperado," which she plays between acts. She also performs other songs from Posner's text set to LaPorte's musical compositions.

Posner is a Northwestern University theater grad and sees himself as more an adapter than a playwright. He has adapted two novels by Chaim Potok: The Chosen and My Name Is Asher Lev, which was produced here by Timeline Theatre last fall. He has adapted short stories by Kurt Vonnegut and a novel by Ken Kesey for the stage. He'll co-direct Chicago Shakespeare's reimagining of Shakespeare's The Tempest next season. His directing partner will be Teller, of the magic duo Penn & Teller. The production will feature music by Tom Waits and choreography by dance troupe Pilobolus.

Stupid Fucking Bird by Sideshow Theatre Company continues at Victory Gardens/Biograph main stage, 2433 N. Lincoln Ave. through August 30. Tickets are $10-39 and can be bought online or by calling 773-871-3000. And in case you wondered, SFB is recommended for mature audiences.