We Are Continuous by Harrison David Rivers 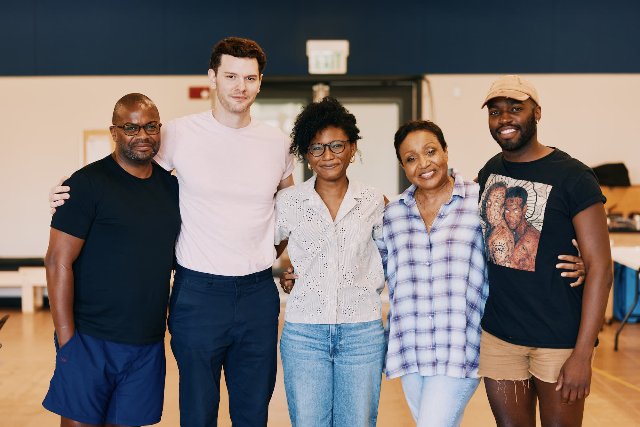 When Theseus entered the Labyrinth to slay the Minotaur, he unwound string to navigate safe passage in and out.

There is a narrative thread that guides us through the riveting, ninety minute, one act play, We Are Continuous, by Harrison David Rivers, which is being given a pristinely powerful world premiere at Williamstown Theatre Festival.

The set designed by the collective DOTS presents sections of two parallel living spaces. That of the Mother evokes a comfortable, middle-class, suburban home. It has mauve walls, couch and chair, as well as a curtained window. Parallel to it is a slice of the Son’s studio apartment.

Midway during the play, for no apparent reason, the two spaces separate creating a gap. We anticipate something happening there but become disabused of that notion until the very end when the gap is further extended.

There is the sense of distance and separation as they alternate speaking about themselves and each other, but not directly to each other. The crisp lighting design by Amith Chadrashaker navigates us from one setting to the other. Generally, when one character speaks, the other sits in darkness. We see her curled up on the couch reading a book.

What unravels is a black mother coming to grips with the initial instinct that her son is gay. “A mother knows these things” she reveals. During the course of the drama the relationship becomes ever more complicated particularly observations about her fundamentalist husband’s lack of acceptance and understanding. She expresses the difficulty of loving and relating to both of them.

When the Son outs himself as a teenager the father insists that he not tell anyone and suggests seeing a Christian therapist. The father seeks religious council and company and reads deeply into religious literature on the sin of homosexuality. He sends these books to his son.

The mother is by nature pragmatic, earthy, and witty. She speaks her mind about being a black mother. The opening night audience was partisan and there was knowing laughter for the situation and crisp lines. Initially, perhaps the audience felt that they were attending a comedy, but the mood darkened and laughter subsided as the drama intensified.

In program notes the playwright is clear in acknowledging that the play is “autobiographical” or “semi-autobiographical.” Primarily, the Son conveys a coming of age narrative of a young man realizing that he is gay and exploring what that means. What does it entail to love and be with another man? This is conveyed with measured, poignant brilliance by Fowler.

There is also the discovery of seeking a life in theatre against the strong objections of his father. The mother is more supportive stating that he will succeed at whatever he chooses.

A major decision is to leave the conservative Mid West and attend graduate school in playwrighting in New York (Columbia).

There is a not too clear incident in which he is assaulted and stabbed six times. The mother visits his apartment and kisses each wound to make them better. Shattered by the incident the dean recommends that he return home. That’s not an option as he fears being stuck there. Staying in school he fails all his courses. But through weekly therapy gets back on track.

Eventually, he meets a tall, white man who becomes the Husband. A decision for the director Tyler Thomas is where to stage him. The area between the parallel apartments becomes an edge and platform. It’s where the men awkwardly meet.

There is a tentative first date. On separate buses taking them to other ends of the city they text instead to meet. That first night is conveyed with awkward intimacy which soon evolved into love and marriage. There are poignant traumatic meetings with their parents. The Son’s folks, passing through visiting others, arrive unannounced. That’s a total disaster,

Marriage plans proved to be problematic. After some discussion it was decided to invite the Son’s parents. A last minute phone call conveys that they just can’t “make it.”

During their honeymoon in Paris the Son is ill. Initially a terrible cough then Shingles. Dreading the inevitable there is a delay in seeing a doctor. That visit and its HIV positive diagnosis is the emotional apogee of the drama.

As Rivers wrote in program notes “I was diagnosed with HIV in 2018 and I knew, maybe even as the words ‘You are HIV positive,’ were coming out of the doctor’s mouth, that I would write about it.”

Aspects of HIV are a familiar topic for theatre. One questions the need for yet another play. The stunning answer is that with powerful candor and insight Rivers has crafted a singular and compellingly personal tale.

Much love and care has gone into this superb production that owes so much to the craft, synergy and compassion of the remarkable trio of performers.

This fine new drama was the perfect way to bring down the curtain on yet another season of the iconic Williamstown Theatre Festival. Moving forward, one may anticipate numerous productions of such a warmly humanistic work of art that has been carved and shaped from real life.