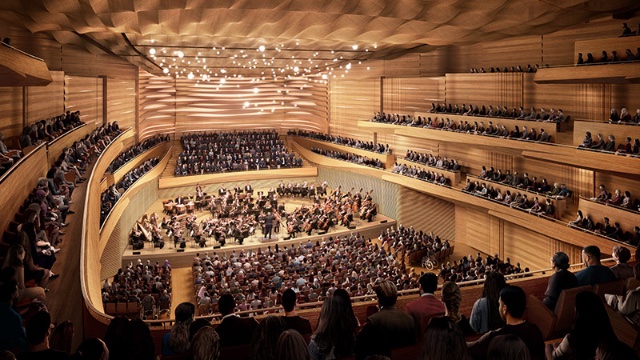 Lincoln Center offers venues for the performing arts and concert programs. Is there an audience for what is offered? John Goberman, who founded Live from Lincoln Center, remarked when he left the staff a decade ago, that from his point of view–where the rubber hits the road, there was no audience any longer for classical music. He went on to produce live orchestral accompaniments to films.

Fine musicians have composed for films. The presentation of film with live accompaniment has been a successful enterprise, engaged in by the Los Angeles Philharmonic, the New York Philharmonic and other orchestras throughout the country. The New York Philharmonic performed Bernard Herrmann’s score for Psycho, accompanied by the film. The young audience producers are desperate to attract stood up and yelled when the Bates Motel sign first appeared on screen. They were immediately caught up in the performance. The renovated David Geffen Hall offers Jurassic Park and Harry Potter later this fall.  Sure winners.

How can producers address the problem of audience? The best answer is given by Hungarian conductor Ivan Fischer who says that concert programming should be like turning the dial on your radio: a little bit of everything musical.

Deborah Borda, the exiting CEO and president of the New York Philharmonic, well understands this need. In Los Angeles, she worked to open up the repertoire and explored new venues. Hollywood Bowl is a vibrant addition to the Philharmonic's home in Disney Hall.  Smaller venues throughout the city offer opportunities for more venturesome productions.

New York is not Los Angeles. The big bucks in LA come from the entertainment industry. They understand the need to entertain an audience. New York is a place where money wants its name up in lights and is willing to pay to get there, but seldom has any sense of what draws an audience.

This week, it was announced that the wife of a founding partner of Alibaba, the Chinese Amazon, had given 50 million dollars to speed up the renovation of David Geffen Hall. Born in Kansas, Clara Wu Tsai appears also to be interested in the ‘democratization ‘ of audience and is commissioning new work to help fulfill that dream. The Tsais have a permanent home in La Jolla, California, and seem to be cut from a cloth of commitment not name-brandishing. The new hall within the hall will be named Wu Tsai.

The Philharmonic's new season will open with a newly commissioned work by Etienne Charles, conventional enough as Juilliard graduate, but definitely rooted in jazz. His work is called San Juan Hill, the neighborhood that was mowed down when Lincoln Center was built.

Charles will refer to early residents of the neighborhood,  pianists Herbie Nichols and Thelonious Monk; clarinetist Russell Procope, a mainstay of Duke Ellington’s band; and saxophonist Benny Carter, who wrote Echoes Of San Juan Hill, a precursor to Charles’ work that had its premiere in 1996 with the Jazz at Lincoln Center Orchestra. Pianist James P. Johnson, historian Arnold Schomburg and Barbara Hillary, the first Black woman to reach the North Pole, all are associated with San Juan Hill.

Bringing in a Black trumpeter to celebrate not just the opening of the Hall but also the opening up of the Philharmonic to the roots of its location is a worthy effort. When Terrence Blanchard’s Fire Shut Up In my Bones opened the Metropolitan Opera season last year,  a new audience packed the opera house. Maybe the New York Philharmonic will welcome other new audience members.

A hard hat tour of the new facility gives you a sense that once you get inside, the space will be inviting. The staff has high hopes for a big screen in an area where you can have coffee and wine and watch what’s going on inside Wu Tsai Hall for free.  All of us have had this experience in the past when we've been late and listen to the first half of a program on screen. Would you choose to come back after this kind of viewing?

Most intriguing is a small space at the corner of 65th and Broadway, easily visible from the street. Exciting programs should draw people in. Steinway has a player piano on which first class talent performs. You might see the notes going down fingerless and images of the performer playing. Conrad Tao, a resident artist, performs with Caleb Teicher a specialist in sand dancing, fun to watch  And on and on.  Instead the Philharmonic is starting with their members performing chamber music.  Ho Hum.

The past two summer months have offered unattractive designs in the fountain area. Fake grass last year. This year, a pseudo construction site. The plaza is the entrance to all three of the Center’s major halls. All the constituents have to live with these entrance decisions made by the umbrella organization of Lincoln Center.

Throughout the world, and in the Damrosch Park section of Lincoln Center, audiences come to free concerts. This may be the answer to audience attraction. No one has suggested this in the major constituents, but it is likely that pens are put to paper calculating how to make this possible. One thing is clear; in the United States, we do not educate an audience. Europe does.  Metropolitan Opera General Manager Peter Gelb meets with Congresswoman Rosa DeLauro of the House Appropriations committee (discretionary funds). She is an opera enthusiast. Does this mean that US public money should be given to institutions that can’t attract audience?

Borda will leave the NY Phil at the end of next season  And so will Jaap van Zweden, Music Director.  Old folks like us have made a mess of the world so we should all be stepping aside to see what young people can do for music and the planet. Yet we are left to wonder if someone like Borda is jumping off a sinking ship? The New York Philharmonic is a tenant of Lincoln Center. That complicates decision making for the future. Has it become so complicated that forward-looking impresarios have their hands tied?