The Bridges of Madison County in Williamstown 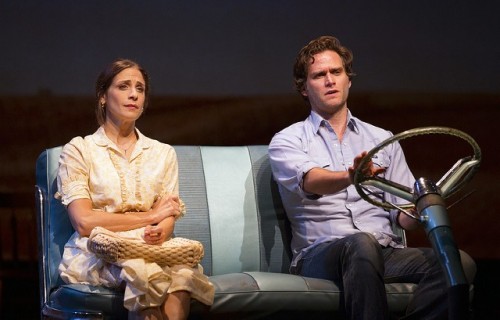 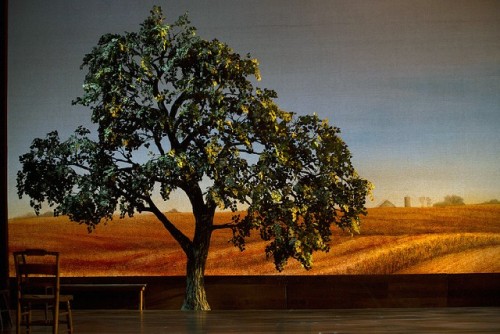 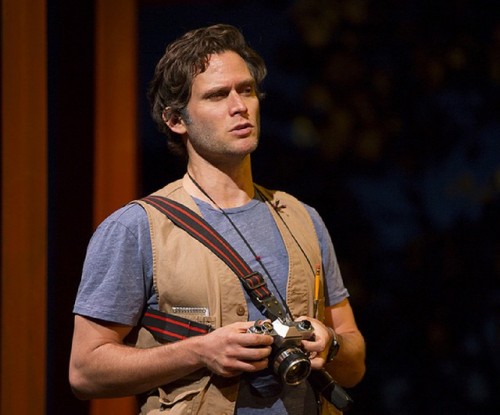 On assignment for National Geographic. 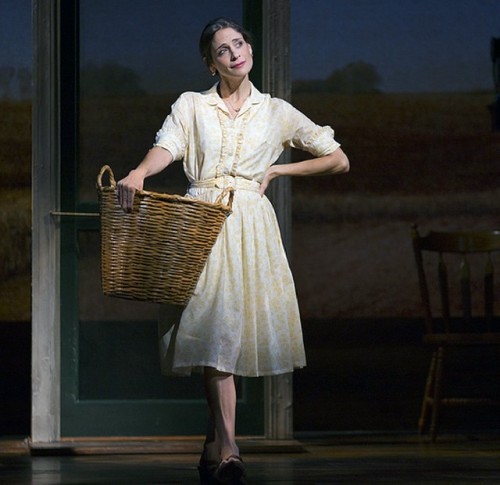 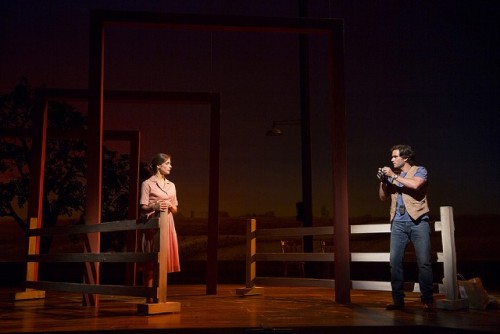 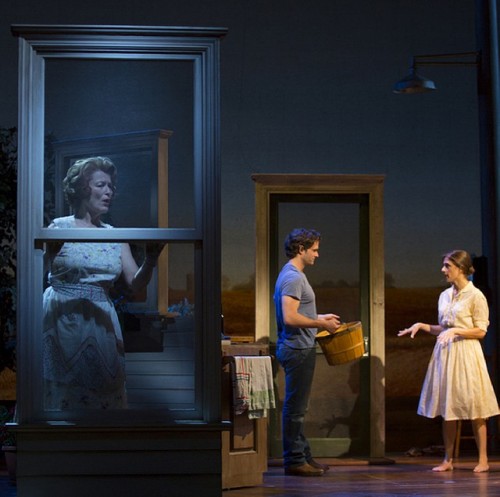 The lovers are never really alone.

The performance last night at Williamstown Theatre Festival of Bridges of Madison County was like being in the delivery room. There was hyperventilated pain and pushing as well as the joy of birth for the Broadway bound musical, with book by Marsha Norman, music and lyrics by Jason Robert Brown, directed by Bartlett Sher.

Normally a production is frozen after opening night. By special arrangement, however, there are daily rehearsals and changes between now and the end of the seventeen day run on August 18.

During a talk back with the cast following the performance we were told that six minutes have been cut since Saturday night. Currently at three hours, including a fifteen minute intermission, there will surely be further cuts. Some seem quite obvious but that’s not my call.

An audience member observed that it is too long for Broadway where the norm is ninety minutes or two one hour acts.

Nick Bailey who plays the teenaged son of Francesa (Elena Shaddow) and Bud (Daniel Jenkins) wisely observed “I don’t get it. People pay between $150 to $350 to see a Broadway musical and then just want 90 minutes!”

Bad plays are always too long while good plays are never long enough.

Steve Pasquale (Robert) who starred in the new musical Far From Heaven last season at WTF stated that Les Miserables had a running time of three hours and twenty minutes. Clearly, nobody complained. I loved the play in London. Although, for me, the film was way too long and bloody awful.

Considering that Bridges is a work in progress it proved to be a richly satisfying evening with gorgeous music and phenomenal lead performances.  I would love to see another, later performance of a work that will surely be much changed by the time it leaves Williamstown. Hopefully, WTF will add us to the press list for the New York opening when A list critics get their hands on it.

If you read the book, or saw the movie with Clint Eastwood and Meryl Streep, well, fuggedahbout it.

The film with that wonderful jazz compilation score assembled by Eastwood was a sensual and intoxicating pas de deux. This version is perhaps way too fleshed out. A surfeit of characters conveys a too literal back story with some additional roles. Each of the peripheral characters gets one moment and a song in the following spot.

Much of this results in clutter as minor characters appear and disappear.

For example, Robert, the National Geographic photographer on assignment to shoot the Bridges of Madison County in Iowa shows up in a messy, cluttered, pickup truck toting, among other props, a guitar.

Which he barely can play. It belonged to his ex wife who could. She appears, sings one song, then vanishes. Cut. Can’t he just mention her? Do we need the guitar?

Similarly, in a scene in Naples, then under GI occupation, there is a scene with her finance, dressed in battle gear, who died in the war. We actually see Bud meeting his future bride. And there is a good girl/ bad girl contrast with her sister Chiara who later returns in a seemingly gratuitous scene. Isn’t there a more efficient way to advance these plot points?

While its nice to meet the nosy neighbors and bratty kids what we really want is the galvanic, sizzling scenes that record those four incredible days that transformed, too briefly, the poignant love story of Francesca and Robert. We just can’t get enough of them.

Robert is strongly present in the first act which chronicles their affair. In the second act, which lacks that chemistry, he is an aspect of her past while there is a focus on her family life. He returns for the three hankie finale.

When the handsome, rugged, adventurous Robert pulls into the driveway of the farmhouse Francesca is a lonely, frustrated, war bride who has cooked, cleaned and raised two kids. We first meet her in a frumpy dress and hair put up in a matronly, sensible manner.

There is an immediate and obvious spark as this Bible Belt desperate housewife offers to drive with him to find the final bridge of his assignment. He has been all over the world including Naples. When he shows her the Naples issue of the magazine she is moved to tears. We sense the immensity of loss, devastation and horror to see images of a city she left in runins now rebuilt. She recognizes the bench she sat on next to the harbor.

Having been kicked out of his home as a teenager it is revealed that Robert is also a refugee. Although a world traveler he calls no place home.

The obvious happens and it is just lovely. You would need a heart of stone not to be thrilled and chilled as she lets her hair down. It brings out the artist she aspired to be as well as the one she finds and loves in Robert.

The role of Francesca was originally cast for Kelli O’Hara who paired with Pasquale in last season’s WTF musical premiere Far From Heaven. Because of pregnancy the role was recast and O’Hara may appear as Francesca for the January New York opening.

It will be difficult to see how O’Hara could possibly be better than Shaddow. With one important caveat. Her Francesca doesn’t even come close to Naples. Brooklyn perhaps. There was nothing about her character that was Italian. There was even a joke about it with her neighbor Marge (Cass Morgan) bringing over lasagna when the family returned from four days at the State Fair.

We needed to pull out a calculator to figure the time line and age of the characters. By the time that her daughter is married (at 18) and her son finishes medical school (25 or 26) they bury Bud. Not long after Robert is dead. That would make her what, mid forties to early fifties? That’s pretty young to be both a widow and loose her former lover.

When Robert parted he told her that the magazine would always know where he is. During the second act he speaks to a woman in the office stating that he is retiring. She is no longer to provide a phone number should the mysterious woman call.

Asked about his premature demise Pasquale revealed that in the back story Robert was diagnosed with a fast and terminal cancer. It’s now too late for them.

There is a conundrum about the music. It is lush and beautiful but lacks the killer instinct of a Broadway bound musical. The music is arranged for nine pieces including piano, two guitars, two violins, one violin/ viola, cello, bass and drums.

Pasquale delivers with a powerful, emotionally devastating and soaring voice. He is a quantum leap more compelling than in the prior Far from Heaven. This is a truly great role for him that well may be acknowledged during awards season.

Production values particularly, lighting by Donald Holder, and set design by Michael Yeargan, are just about perfect. The staging, with many elements rolling on and off to create modular signifiers of home, farm, bridges and town are an integral aspect of the performance.

While we are familiar with stage hands moving props about this is different. Often they remain on stage as signifiers of neighbors and the community. The secret lovers, during their too brief affair, are never alone for a moment. Everyone knows that Robert did not return to his motel at night.

The most fleshed out aspect of small town gossip is the neighbor Marge who uses binoculars to catch a glimpse of the hunky photographer. With some comic relief she always calls at just the wrong moment. Or wants to come by and chat or share a new recipe for coffee cake. She has a terrific song “Get Closer” making the most of a minor role.

This small town prairie socializing also underscores the enormous cultural loss and dislocation from her Napolitano roots, where baking bread is like conducting a symphony. Compared to that savory cuisine and lifestyle, on the farm, Francesca serves her family corn bread and meat loaf.

For those four days the lovers found each other. How brief and cruel when measured out over a barren and dutiful lifetime. Instead of riding the wind with him in a life of artistic adventure she does the right and moral thing. Ultimately, she may love her children even more than Robert. Isn’t that the way it’s supposed to be?

While passing through, like Robert on his way to the next assignment, this evolving work left a theatre full of melancholy, abandoned lovers. If only they would stay a bit longer, like Marge, I would bring over a pan of my incredible Sicilian lasagna.

God forbid I should ever end up in Iowa.

Other than to pause long enough to shoot the Bridges of Madison County.