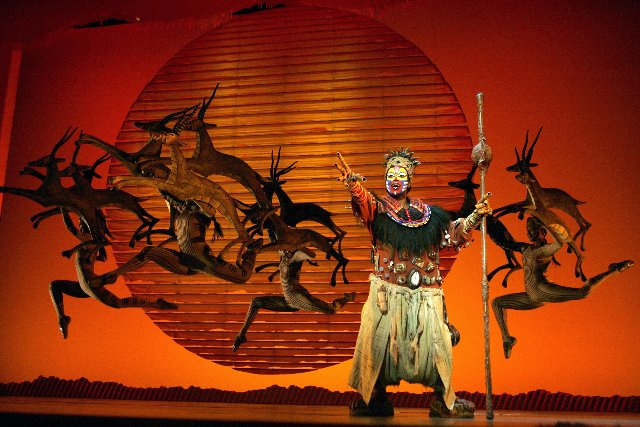 An old maxim notes that it’s best to begin at the beginning.  In the case of “The Lion King,” its beginning may be the best received by an audience ever.  The character Rafiki, a mandrill, sings the goosebump-producing “Circle of Life / Nants Ingonyama” that introduces African voice, thought, music, motion, and rhythm.  Meanwhile, the parade of absolutely stunning human-puppets-as-animals walks the aisles and fills the stage, becoming the most remarkable anthropomorphic array imaginable.  At the opening number’s end, the applause at this performance was deafening.

“The Lion King” is one of the most honored and awarded Broadway musicals of all time.  Despite the disruption of the Covid-19 pandemic, it is the biggest grossing ever.  Playing in San Jose on its third national tour, it largely replicates the Broadway production, topping the charts on every dimension – scenic; music and sound; choreography and movement; story line; and performance.

But if there is one incomparable distinction, that goes to the fantastic costumes.  Director and Costume Designer Julie Taymor rightfully won Tonys and most every other grantor’s awards in both categories.  In the distinctive style used for most of the animals (lions mostly accepted), the human puppet’s body apparel suggests the animal, but the performer’s face is exposed, while the caricatured animal’s face is suspended on a tether above and in front of the performer’s, allowing the viewer to sense both the actor and the animal character.  The precise movements by each animal also distinguish and amuse – the elongated stretching of the cheetah; the bugged eyes and dangling tongue of the lasciviously ravenous hyenas; the clacking beak of the hornbill; and the particular shifting of the heads of the lions when they communicate.

The plot is one that appeals to adults and children as well.  King of the lions, Mufasa, is killed under confusing circumstances, and his only son Simba feels the responsibility for the death.  Instead of facing his people, he escapes to the jungle.  Only when Simba becomes a young man does he return to confront his demons and his uncle, Scar, who unrightfully ascended to the throne.

The narrative works particularly well, because of the moral issues it contains.  Musically, the show opens and closes on the same theme, the circle of life, on how we can never have or do everything that we wish, but we can find a place that can leads us to fulfillment.  It is also about the cycle of life – of the inevitability of death and of regeneration.  When Simba cries that his father is gone, he is told to look into the water. It is through that reflection that he realizes that his father lives on in him.  It is also about courage, loyalty, love, environmentalism, and a need for balance in the world, which makes room for animal predator and prey.

In contrast to what could be considered preachiness in treating with moral issues, plenty of humor lightens the mood.  One of Simba’s buddies in the jungle is Pumbaa, the warthog, who suffers from chronic flatulence.  There are numerous jokes about “gas” that kids find funny – and maybe adults as well.  Even the villain, Scar, provides humor.  Effete, obnoxious, and sarcastic, he becomes a laughable character.

Of course, the music can’t be ignored.  The use of African lyrics and tunes and the pounding of batteries of large drums add locational feel, while many songs drive the plot forward.  Finally, the most memorable piece from the show speaks both to the romance of Simba with Nala and to greater realms – “Can You Feel the Love Tonight?”