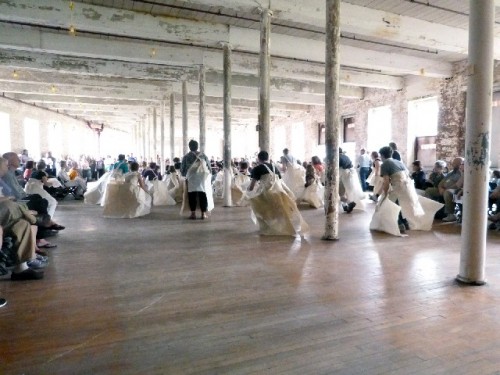 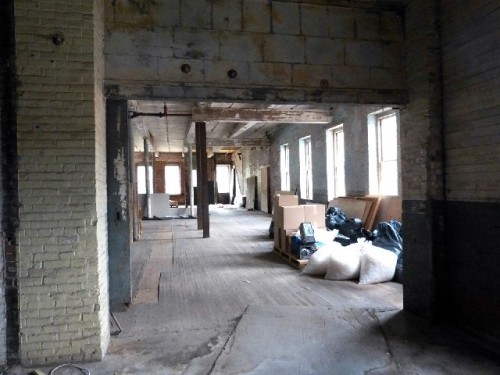 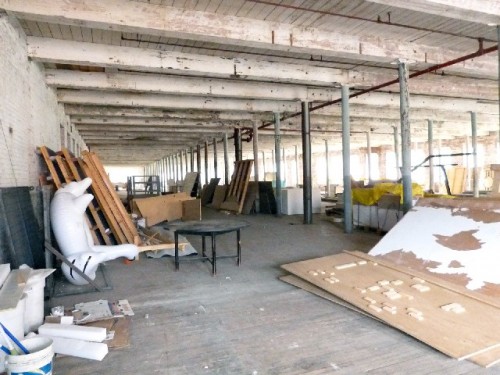 The development will take several years. 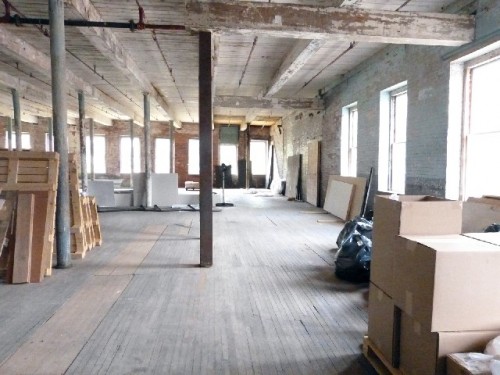 The expansion will increase exhibition space by a third. 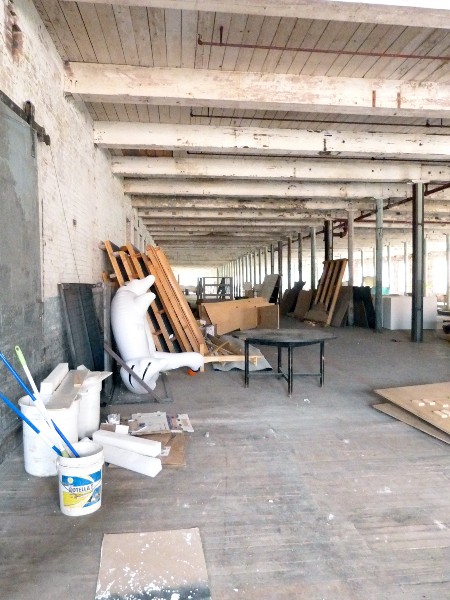 Coupled with the Clark’s expansion this MoCA project will greately increase tourism and the economy of the Northern Berkshires.

Just days before the deadline for the house to pass a bill which included some $25 million plus to complete the final phase of Mass MoCA's build out, director Joe Thompson was sanguine but tense. The occasion was a performance work by Ann Hamilton in the yet to be renovated Building Six. In March we spoke with Thompson for details of what that would entail. Looking about at the vast space of Building Six he said "We plan to take that wall down." He was pointing to opening up an area to be more expansive. I said "Don't jinx it." He laughed responding "Exactly." Now it is a reality and Thompson must launch the difficult challenge of raising $30 million in addition to the state funding to complete the project. What follows is the museum's press release.

North Adams, Massachusetts - Phase III will include the addition of some 130,000 square feet of gallery space, doubling the space currently available for exhibitions, plus significant infrastructure investments in its performing arts courtyards and other exterior venues.

"The first component within our Phase III build-out is indeed already complete," notes MASS MoCA Director Joseph Thompson. "In collaboration with the Hall Art Foundation, last September we opened a seasonal 10,000 square foot gallery dedicated to the art of Anselm Kiefer. Our next Phase III initiatives will be concentrated in Building 6, which sits like the prow of a ship at the confluence of the north and south branches of the Hoosic River, at the western-most periphery of our campus. Most of the remaining Phase III development of 120,000 square feet of interior space will be slated for longer-term installations, to complement our roster of temporary changing exhibitions and our year-round schedule of performing arts events and music festivals. We will also improve accessibility to our network of exterior courtyards and performing arts venues, upgrade public safety, and bring sufficient civil utilities to the campus to allow us to re-inhabit the entire site."

A Proven Model
MASS MoCA has found success leveraging its generous space, growing audiences, and sophisticated technical capacities to collaborate with artists, collectors, foundations, and educational institutions, bringing important bodies of art to the public within its singular factory campus. Expanding on the "campus of museums" model pioneered in its Sol LeWitt Wall Drawing Retrospective, in which the museum teamed up in 2008 with the Yale University Art Gallery and the Williams College Museum of Art, the museum recently partnered with the Hall Art Foundation to rehabilitate a former concrete water storage tank that now stands as a long-term sculpture and painting installation by the German artist, Anselm Kiefer. The museum also partners frequently with Jacob's Pillow Dance, the Grammy-winning rock band Wilco, Bang on a Can, and the Clark Art Institute, among others, to produce a rich calendar of festivals, exhibitions, performances, and educational programs.

In its Phase III development, MASS MoCA will work with additional partners to locate milestone artworks and programs within the museum campus. "We are finding interest in this new model of deep, long-term programmatic collaboration," said Thompson. "For our partners and potential partners, co-locating at MASS MoCA provides access to a growing audience interested in new art and new ideas. We are able to offer compelling economics and excellent logistical, technical, and visitor services support. The nearby scholarly resources of Williams College, The Clark, and Massachusetts College of Liberal Arts are formidable. For our public, having quasi-permanent exhibitions displayed cheek-by-jowl with MASS MoCA's vibrant program of changing exhibitions and performances provides many reasons to return. There is something exciting about having these core 'proton-like' installations of art, around which our changing shows spin like electrons - each amplifies and informs the other. For our staff and institution, having long-term, high-quality art provides continuity, depth, and financial strength. And for our home region, adding destination quality collections both attracts more visitors and extends the length of their stay." Together with MASS MoCA's growing campus, the recently completed expansion of the Clark in Williamstown, the Williams College Museum of Art's exhibition programming, the Williamstown Theatre Festival's compelling roster of plays and musicals, and other Berkshire attractions, the region will leverage many more overnight stays and extended weekends, which is the key to maximizing economic impact.

The total scope of this Phase III project includes the renovation of 130,000 square feet of galleries and work spaces plus 30,000 square feet of courtyards and walkways, including mechanical systems and building controls, ADA-compliant accessibility, basic site and civil engineering work, and provision of building reserve and maintenance funds. The Anselm Kiefer partnership with the Hall Art Foundation initiated Phase III with the renovation of 10,000 square feet of gallery space and upgrades to site landscaping, including improvements to the museum's West Main Street entrance gate and roadway, which will eventually provide enhanced connectivity to the downtown business district and the soon-to-be-renovated Greylock Marketplace at Heritage State Park.

Funding
MASS MoCA is organized as a public-private partnership. The museum's land and buildings are owned by the MASS MoCA Commission, a special municipal authority chartered by the State Legislature through Chapter 8 of the 1988 Acts and Resolves of the Commonwealth, which authorized the creation of MASS MoCA and provided $35 million in seed grant funding for Phase I of the project. That initial Phase I investment was matched with $15 million in private-sector contributions. After several years of delay caused by the recession of the late 1980s and early 1990s, construction of Phase I commenced in 1996, and the museum opened to the public in 1999.

Sole responsibility for programming the facility and maintaining the massive complex rests with a private not-for-profit charitable foundation created for that purpose. (State funds for projects and operations are limited to competitive grants won through the Massachusetts Cultural Council.) Since the project's beginning, the MASS MoCA Foundation has raised $110 million in private funding for capital improvements in land and buildings and for operating and programming funds ($27 million of which was invested in building improvements, and $83 million of which went to programming and operations). In addition, the Foundation has privately raised a board-restricted fund for building maintenance and educational programming of $15 million.

The economic impact of Phase III will be substantial. Economic impact studies, including a major study by the Ford Foundation/Williams College Center for Creative Community Development (C3D), pegged the annual economic impact of MASS MoCA's existing visitation to be some $14 million per year from the museum's exhibition and performing arts programs, plus some $2-$3 million per year generated by its growing music festivals. In addition, the museum has retained some 26 businesses as commercial tenants on its mixed-use campus, which together add another $5 million yearly to the regional economy, bringing MASS MoCA's total economic impact to over $20 million per year. Increased state and local taxes leveraged by the museum have more than covered the annual financing costs of the original state grant investment, which were funded by bonds issued in the mid-1990s, and which are now largely retired.

Overnight stays are the single most important drivers of the Berkshire cultural destination economy: even a small incremental change in the percentage of overnight visitors has dramatic effects on the regional economy. MASS MoCA's Phase III development, coupled with the expansion of other Berkshire County cultural facilities and programs, will grow visitation and significantly increase the percentage of overnight visitors, extending the stays of visitors across the entire Berkshire region, thus furthering the museum's community redevelopment mission "to catalyze and support the creation of new art, exposing visitors to bold visual and performing art in all stages of production, and re-invigorating the life of a region in socioeconomic need."

There have been substantial gains in the economic health and diversification of the North Adams economy since MASS MoCA's opening in 1999, though much work remains to be done. Before MASS MoCA's opening, for example, North Adams' unemployment was as high as 7 times the state's overall rate of unemployment. After reaching near parity in 2005, following the recession, unemployment is some two times the state average. And while storefront occupancy rates have improved remarkably from some 25% to 70% over the past 14 years, more than one out of four storefronts remain empty.

MASS MoCA projects a net gain in annual attendance of up to 65,000 patrons associated with the Phase III project. According to the C3D study, under current visitation patterns to the Berkshires every new 10,000 patrons to MASS MoCA translates to new region-wide economic activity of approximately $1.8 million, generating $160,000 in additional local and state tax revenues, such that the total impact of Phase III development could reach over $11,000,000 per year, and over $1,000,000 per year in new tax revenues. MASS MoCA projects that the lengthened duration of stay triggered by the expanded campus - in concert with the major expansion of the Clark - will increase the percentage of visitors who spend the night in the northern Berkshire region, thus adding even more fuel to the economic impact dynamic.

"Based on our experience with the LeWitt and Kiefer installations, we expect that housing more long-term installations of milestone works of art will lead to increased visitation and longer stays at MASS MoCA, in the northern Berkshires, and indeed across the entire county," remarked North Adams Mayor Richard Alcombright. "Together with increased offerings at the Clark, cultural tourists will extend their stay a length of time, and day-trippers will increase the frequency of their visits, creating significant economic gains for our region. There are countless cross-marketing opportunities across this area's cultural attractions. We are all just beginning to understand the power of collaboration in defining the Berkshires as a destination attraction, and North Adams wants to be a big part of that future. This will help us raise our flag even higher."