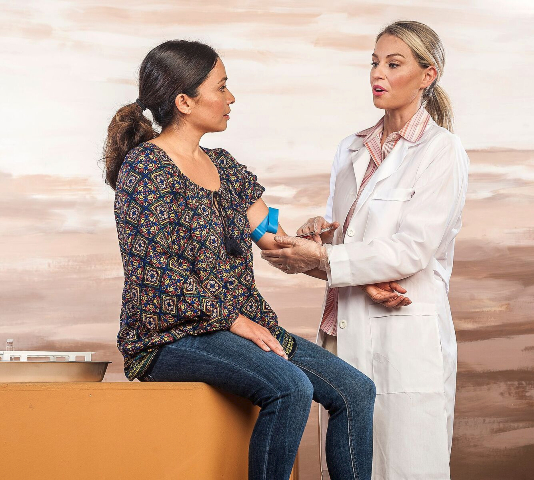 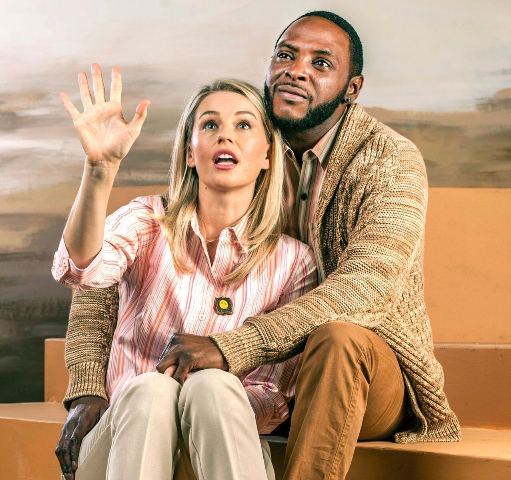 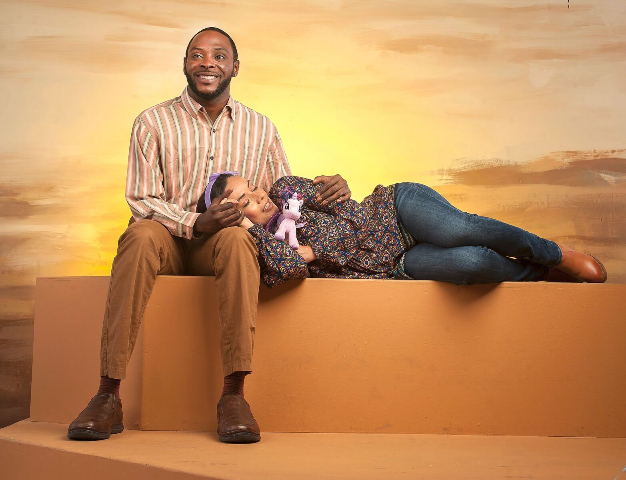 Art has the ability to make us feel a variety of emotions, including fear and helplessness.

Consider the following from Deborah Zoe Laufer’s heartfelt, heartbreaking and unsettling drama Informed Consent, which GableStage is tackling in a mostly-commendable, minimalist production through Aug. 27.

Two characters are debating whether they would undergo genetic testing so that they know whether a fatal, incurable disease is in their future.

A character referred to as “Five”: What if you find out you’ve got something awful and there’s no cure for it? I’d rather not know. It would make me crazy.

Jillian: Doesn’t it make you crazy not knowing? There might be something lurking in your genetic makeup, just waiting for its time. You’re powerless if you don’t know.

Precisely. All we’re left with following this exchange is a sense of dread, uncertainty and helplessness – feelings which sound all-too-familiar for many in these scary times.

Informed Consent is a morality play about science that’s never preachy or jargon-filled. For some people, watching the play is like preparing for a major and risky operation.

Laufer’s thought-provoking, issue-packed, yet taut play (roughly 95 minutes) tempers brutally serious issues with humor and a sunny, hopeful optimism. Such reassurance comes courtesy of such characters as scientist Jillian (a spirited, versatile Betsy Graver) and her husband, Graham (a multi-faceted Jovon Jacobs), a children’s book author. They have a way of spinning statements so that vibes of hope and optimism fill the air, reach our frayed nerves and calm them.

Jillian has reason to feel down and worried: Her mother died in her 30s from early-onset Alzheimer’s Disease and genetic testing has revealed she most likely will inherit the same condition. Furthermore, there’s a chance her 4-year-old daughter will also inherit it. Jillian’s greatest fear is she won’t remember her daughter by the time she’s, say, in her 30’s or 40’s.

She  possesses a dogged determination and immediate sense of urgency, but she also projects a bright, positive attitude that’s as contagious as the flu.

“With all those chances (without our genes) for things to go terribly wrong, here we are!,” the mother and anthropologist exclaims.

With a genomic sequence undergoing billions of copies, “can you imagine how many goofs might happen? So what’s amazing isn’t the typos and glitches and goofs. What’s amazing is how often it turns out right!”

We almost believe her when she claims that advances in genetic testing have come so far that people might someday live forever.

OK, Jillian is a tad naïve, but she has a point: Life and science can be terrifyingly unpredictable. At the same time, the field of science, especially genomic research, which is changing faster than many can keep up, is also unpredictable in a way that should make us hopeful: A scientist researching something never knows what he or she will discover – possibly a discovery that could prove a boon to humankind and the health field.

Jillian seems like the most well-intentioned, caring person we could ever hope to meet. If we’re stricken with some incurable, deadly disease, we’d certainly want her working for us – even if she’s racing against the clock to find a cure that only offers a sliver of hope. This professional has way of making us believe it will work.

It would be easy for a playwright to make Jillian the undisputed protagonist. But Laufer isn’t looking for the easy way out. We cannot simply lump Jillian into such neat and convenient, black and white categories as hero or villain, saint or sinner. Sher, her work ethic and outlook are admirable, but try telling that to Arella (a passionate, proud Francisca Munoz). Arella’s a spokesperson for a Native American tribe which makes lives by the Grand Canyon. To tribe members, the Grand Canyon is as much a part of who they are as, well, their DNA and blood (they claim to have originated at the famous landmark).

Jillian’s learned, through a colleague at an Arizona university, that this tribe has a history of diabetes. The cause is unknown, but Jillian’s fierce determination makes her want to investigate and possibly end the sickness that’s been plaguing tribe members for many years. The problem is, tribe members consider their blood sacred and believe letting it leave their body won’t let them rest when they enter the world to come. Arella and the tribe’s council, therefore, view Jillian as someone not on their side.

Surely most of us would consider Arella’s desire to conduct blood tests on tribe members as a kind gesture. After all, she only wants to end their physical suffering. But what about their spiritual well-being?

In this play based on a real-life court case involving a Native American tribe and an Arizona university, interests of science and the sacredness of religion butt heads. Jillian, likely meaning well, nevertheless takes her research too far, infuriating tribe members, leaving them emotionally scarred and feeling a tremendous loss. Meanwhile, Jillian angers her colleagues at the university and the dean (a no-nonsense Elizabeth Dimon, glasses perched on the front of her nose) fires her.

At this point Jillian must think like Wicked’s Elphaba, muttering “No good deed goes unpunished.” Unfortunately,  she’s stuck in a morally grey area.

Science vs. religion, the importance of people supporting one another, truths vs. myths, talking to children about grave topics, morals, censorship, how we tell our stories and even the nature of truth make their way into this play.

Arella: You talk about truth. You know, there’s always a new truth. The latest scientific breakthrough. The new discovery. And then a few years later, it’s disproven and there’s a newer truth. Well, we’ve believed what we believe for a thousand years and it’s sustained us through some very bad times.”

Part of what makes Informed Consent compelling, relatable theater is that we shift allegiances between Arella and Jillian. Each has valued points to make and Laufer refuses to take sides, giving both an equal voice. The play also carries a message of unity that’s sorely lacking and refreshing in today’s divisive times.

Jillian: All humans are 99.9 percent the same genetically. One base pair out of three thousand between you and the guy next to you. We have so much more in common than we have differences. Really.”

Graver and Jacobs are the only cast members out of the talented quintet of thespians who play one role. The others convincingly portray multiple parts, segueing smoothly from one role to another.

As Jillian, Graver’s wide, bright eyes and smile convey a youthful naivete and optimism, but also a positive, confident aura that puts us at ease. Picture a vibrant, young, new kindergarten teacher who just knows her class will learn their A-B-C’s within a week. The actress makes it clear her character will do anything, even die, to save her daughter. She speaks about the child in a tender, loving voice. And when her character must break down in tears, the pain in her cracking voice sounds achingly authentic.

Jacobs imbues Graham with a romantic, dreamy and equally positive demeanor. He also invests Graham with palpable anger and fear, at appropriate times.

In her largest role, Munoz plays tribe spokeswoman Arella with a strong sense of pride and dignity. She stands tall atop one of the highest levels of set designer Lyle Baskin’s arrangement of platforms, against an orange backdrop on a screen, suggesting the Grand Canyon. The message Arella imparts, through Munoz’ performance, is clear: This is my home and you, Mrs. Genetic Anthropologist, are infringing on my and my fellow tribe members’ property. Please leave. Now.

Under Laufer’s detailed, sensitive direction, there are also friendly, supportive moments between Jillian and Arella, who is clad in an outfit with exotic patterns to make her stand out from the others (the costumes were designed by Ellis Tillman).

Laufer has found a creative structure for the play. It begins as a healthy Jillian is preparing to writer her 4-year-old daughter a letter. She’s trying to explain her situation and express her love before early-onset Alzheimer’s makes that impossible. The rest of the cast, which serve as her DNA, whisper the letters comprising Jillian’s Genome sequence. They’re like voices in her mind, which sound eerie and unsettling. Then, in a kind of flashback, Jillian, with the help of the ensemble, tells her story. Ensemble members serve as narrators – a directorial choice that’s appropriate, considering that this play celebrates story-telling. At the end, we revert to the beginning, when a health Jillian’s about to sit down and right.

Part of Baskin’s set consists of blown up letters making up Jillian’s genome. Meanwhile, shadows of what resemble footprints grace the stage. They could suggest our journey – our story.

Laufer wants us to consider: Does the sequence of letters alone represent who we are? Does it tell our stories and serve as our destiny? Or do we tell our own tales and shape our own destiny.