By Matt Marks and Paul Peers 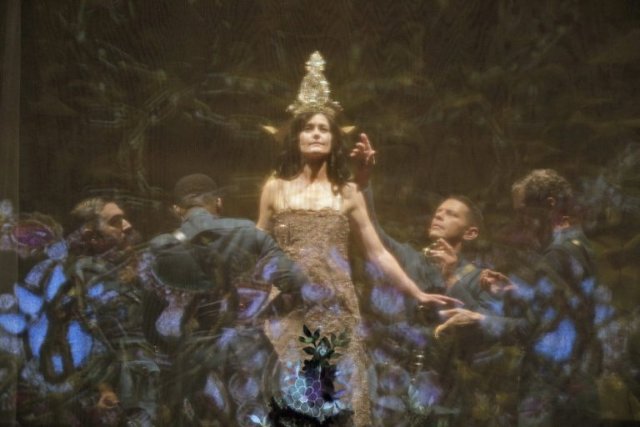 Tina Mitchell as Mata Hari, behind scrim and bejeweled before being stripped of her possessions at Saint-Lazare prison. photo by Cory Weaver.

On February 13, 1917, a Dutch woman, Margaretha Geertruida MacLeod (née Zelle), was arrested in Paris, accused of spying for Germany during The Great War, which was still under way. This exotic dancer turned courtesan would become a cause célèbre. Known by her stage name, she was Mata Hari, literally meaning eye of the day in Indonesian, but when the words are combined it means the sun.

Following its premiere at New York’s PROTOTYPE Festival 2017, West Edge Opera presents Matt Marks and Paul Peers innovative opera Mata Hari. In only 90 minutes, its engaging dramatic artistry provides a powerful jolt that upends many of the customs of the operatic tradition.

As a corollary to the conundrum “Who decides that it’s art?,”  we could ask “Is this opera?” Certainly any art form demands change, which means that past conventions must be broken in order to evolve. Opera’s special pride is the power of the trained voice. Except for special performance circumstances, such as outdoors, one of the seemingly inviolable laws of opera is that voice is acoustic. Composer Matt Marks expressly designed this opera for amplified voice, which creates a bigger and more electronic sound but with less clarity. Several system glitches at the opening performance disturbed continuity in a way that wouldn’t occur without the intervention of a sound system. Opera sound and strength is accomplished by creating a large resonating chamber, which prohibits singing falsetto, which also occurs here, along with some pop singing style.

Opera permits some amount of spoken dialogue, often resulting in a reclassification of the piece, as opera buffa or operetta. Here, the title character, Mata Hari, is a spoken role. Unfortunately, supertitles are not provided for the spoken word, and many details of the story are unnecessarily lost to audience members who can’t hear all of the dialogue clearly.

Since the conclusion to the story is foregone, its overall dramatic arc is undermined, however dramatic incidents do occur. As a mood piece, a foreboding tone is maintained throughout. The tautly visualized action centers on Saint-Lazare prison where Mata Hari is incarcerated and tried, with flashbacks to her liaisons with important officials, military officers, and spies of many nationalities.

The title character is ably depicted by actress Tina Mitchell who conveys Mata Hari’s wily confidence and strength as well as her vulnerabilities and guilt as a mother. Perhaps the most interesting portrayal sung in dazzling operatic style, is that of the chain-smoking prison nun, Sister Léonide, played by Molly Mahoney. Almost as two different characters, she variously taunts and consoles the prisoner. In yet another production conceit, she sings Mata Hari’s part when the libretto calls for powerful vocalization.

Prosecutors in the espionage case against Mata Hari failed to offer any reliable evidence of her guilt, but that did not deter them as they held prejudices and objectives that extended beyond this inconsequential trial. The false accusations and harsh public opinion of her during the trial derived in part from Mata Hari being a strong woman with her own behavioral compass. Her very womanhood was a source of vulnerability in society, and her Asian personna was so convincing that she suffered racial discrimination despite being white.

Scapegoating is a common means for those in power to attach blame and demonstrate action. Perhaps the French are no more inclined than other nationals toward this unconscionable strategy. But three famous cases leading to and during World War I including Mata Hari are etched in memory. The conviction of Alfred Dreyfuss for treason, which also had strong anti-semitic overtones is a second. The final one is the basis of the movie Paths of Glory in which four soldiers were executed for cowardice as a means of covering up the incompetence of a general.

A chamber group of several instrumentalists, playing the likes of accordion and electric guitar, produce sufficient and engrossing sound to support the staging of Mata Hari. The clever and absorbing musical vernacular is eclectic and modern, with considerable dissonance and a large measure of toned percussiveness, generating pulse and disturbance. Some of the feel of the music and the fatalism are reminiscent Brecht and Weill’s Three Penny Opera and Kander and Ebb’s Cabaret, both of which also span genres.