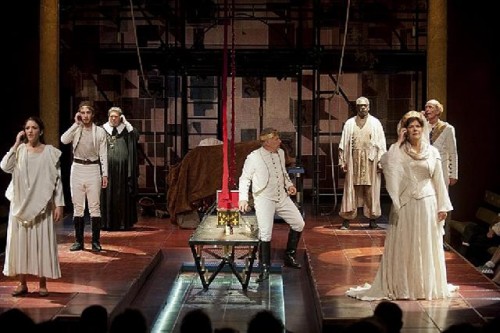 The cast on their cell phones. 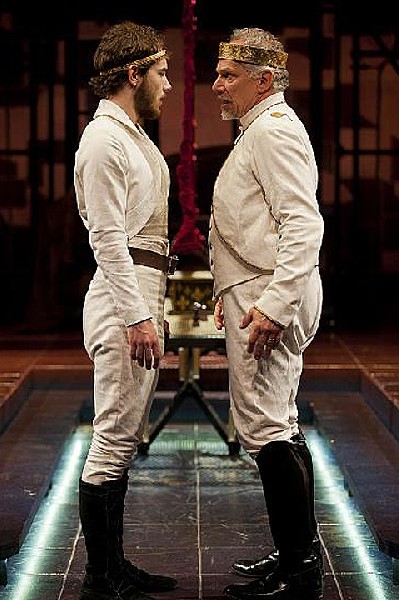 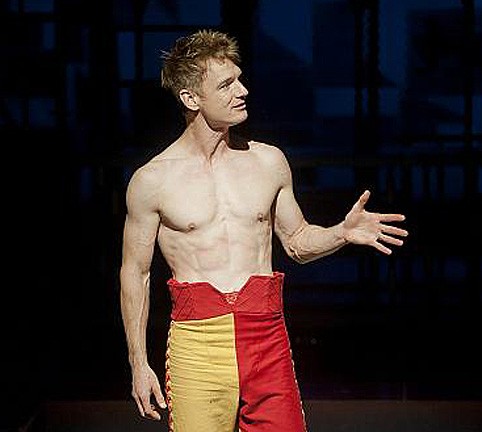 A fit and sexy prince Hal played by Henry Clarke. 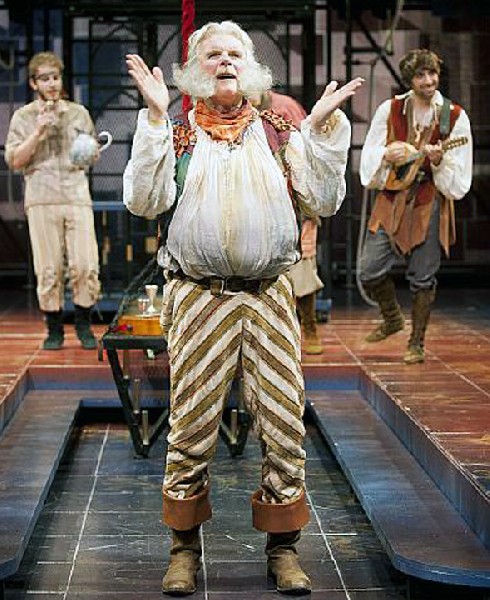 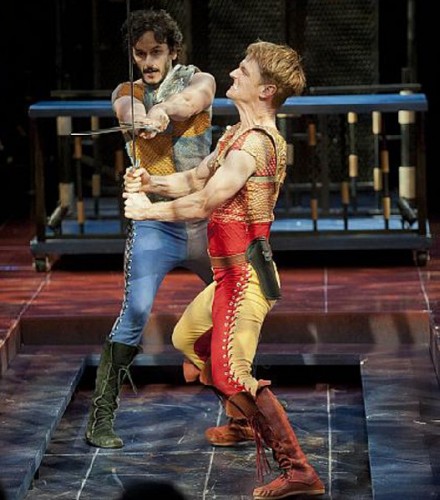 Mortal combat between Hal and Hotspur. 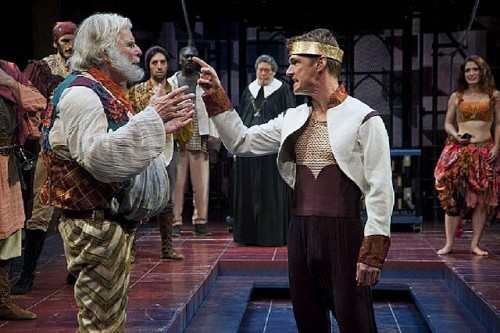 Last year Shakespeare & Company launched a plan to perform the tetralogy of History Plays, one each season in succession, staring with Richard II.

With an extreme makeover, adapted, directed and with Jonathan Epstein as Henry IV, last night we attended the reduced and conflated Henry IV, Parts 1 & 2. In the original text the two plays run to several hours. Given the brutal seating of the Tina Packer Playhouse, modeled after theatres of the Bard’s era, that is beyond endurable.

Even in the condensed version of three hours with intermission it was a physically demanding experience. It reminded me of our visit to the Old Globe in London and its unforgiving benches. Even though we rented cushions.

Much to the credit of this brilliant, lively and often hilarious production, more often that not, we were wafted into the action and distracted, although with constant shifting about, regarding our vexed creature comfort.

Making Shakespeare accessible to contemporary audiences, pushing back the goal posts, Epstein had the players, although dressed in the wonderfully rich and inventive period costumes by Arthur Oliver, chatting on cell phones, consulting computers and packing pistols. There are references to visiting Tanglewood among the shires and Falstaff, the perfectly delightful Malcolm Ingram, several times says “pussy” for a laugh. It is certainly not an Elizabethan term although they had others not familiar to a modern ear.

Early on in the play King Henry states,

For God’s sake let us sit up on the ground
And tell sad stories about the death of kings:
How some have been depos’d, some slain in war,
Some haunted by the ghosts they have deposed,|
Some poisoned by their wives, some sleeping kill’d,
All murthered – for within the hollow crown
That rounds the mortal temples of a king
Keeps Death his court, and there the antic sits,
Scoffing his state and grinning at his pomp,
Allowing him a breath, a little scene,
To monarchize, be fear’d, and kill with looks;
Infusing him with self and vain conceit,
As if this flesh which walls about our life
Were brass impregnable, and humour’d thus,
Comes at the last, and with a little pin
Bored through his castle wall, and farewell king!
Cover your heads, and mock not flesh and blood
With solemn reverence, throw away respect,
Tradition, form, and ceremonious duty;
For you have but mistook me all this while.
I live with bread like you, feel want,
Taste grief, need friends – subjected thus,
How can you see now to me, I am a king?

How now! Didn’t we hear that last year uttered by Rocco Sisto as Richard II?

Interviews about Epstein’s adaptation reveal that he has taken liberties and switched around some lines. But Henry speaking lines for Richard! Good grief.

Another significant change is that Epstein has backrounded Henry even though the two plays ostensibly are focused on him. It is a bold and interesting decision. In his reduced presence Henry is key, as sharply delivered by Epstein, in a commanding and dignified, crisp performance.

The plays have been reconfigured to the complex relationship between the rake of a young prince Hal and the scandalous influence of the gluttonous Falstaff. Here Ingram has the traditional, enormous, stuffed belly. His wonderful and nuanced performance, which utterly captivated and charmed the audience, expanded far beyond enhanced girth.

We sopped up the full meal of his Falstaff with a gravy of pure joyous entertainment, washed down with buckets of sack, a sweet wine fortified with brandy (known today as sherry).

All of this excess put on his tab which has bankrupted the innkeeper and ersatz companion Mistress Quickly given a fine turn by the versatile Ariel Brock.

Through the persistence of tabloids we are readily familiar with the misadventures and pratfalls of our young Royals. It appears to be a coming of age ritual so well defined by Shakespeare’s womanizing, drinking and gambling Hal. He is played with passion and athletic panache by the trim and fit Henry Clarke. This young actor firmly holds his own when interacting with more seasoned veterans like the superb Epstein and Ingram.

The evening focuses on his coming of age seemingly torn between duty to King and country and being his own man given the latitude and indulgence of a surrogate, dad in Falstaff. Henry challenges his heritage of duty and honor while Falstaff inspires him to embrace the fullness of life. We come to understand the constraints of what it means to be born into a life bound by duty and honor. Until then, well, play on.

The fulcrum of this conundrum tips on the conflict with Harry Percy or Hotspur (Timothy Adam Venable). He and his father, the Earl of Northumberland (Kevin G. Coleman), lent crucial support when Henry Bolingbroke usurped the crown from Richard II and became Henry IV. There were promises never kept and Hotspur takes arms to seize the throne with a consortium of allies.

In a poignant exchange between father and son Henry asks can you not see that Hotspur is to me what I was to Richard? It is a sobering inquiry and the sanguine Hal is called to arms and a test of his mettle.

This battle also involves Hal’s ally Falstaff who is charged to bring a band of men to the battle. They prove to be a motley crew of ruffians and nothing more than canon fodder. Of the unseen band of a hundred but three, and Falstaff with great bathos, are among the few which survive.

Absurdly dressed for battle the fearful Falstaff said “I wish it were bedtime, Hal, and everything were okay.” To which the reply is “But you owe God a death” then Hal departs.

Alone on stage Falstaff will have none of that as he speaks hilariously of duty and valor.

“It’s not due yet. I’d hate to pay him before the due date. Why should I be so eager to pay him before he even asks for it? Well, it doesn’t matter: honor spurs me on. Yeah, but what if honor spurs me off once I’m on, and picks me out to die? What happens then? Can honor set a broken leg? No. Or an arm? No. Can it make a wound stop hurting? No. Honor can’t perform surgery, then? No. What is honor? A word. What is in that word, “honor?” What is that “honor?” Air. Quite a bargain! Who has it? A guy who died last Wednesday. Does he feel it? No. Does he hear it? No. It can’t be detected, then? Right—not by the dead, anyway. But won’t it live with the living? No. Why? Slander won’t allow it. That’s why I don’t want any part of it. Honor is nothing more than a gravestone, and that concludes my cathecism.”

That said, with raucous applause from the audience, Ingram rumbled off to war.

The fight scenes prove to be riveting with a mix of pistols, swords and fists. The fight to the finish between Hotspur and Hal is alarmingly grim and graphic. By sharp contrast it portrays the gruesome reality of Falstaff’s mockery of honor.

Through combat we feel the maturing of Hal. He has faced and triumphed over death. In terms of the history plays this is a significant step toward solidifying and stabilizing England. It is a firm move toward Empire although there will be further rebellion and sedition particularly in Richard III.

Having prevailed against the challenge of Hotspur and Northumberland there is a deception as Henry feigns an offer of peace and amnesty. Their army dispersed in an untimely manner Hal arrests and executes his enemies. He appears to be learning the tricks of the trade of monarchy.

Alone in the death chamber of his father Hal absconds with the crown which will soon be his.

Shakespeare wonderfully contrasts the crown as ornament and artifact, then when Henry rallies and confronts his son, explores the depth of what it truly signifies. It is the final lesson in the all important transfer of power from one generation to another.

There is poignant tragedy when Falstaff races through the night to greet his friend now Henry V. He has visions of becoming a Duke or Earl. With his friend on the throne there will be no limit to his power and influence.

In a withering exchange, recalling the play and 1964 film Becket, now King, Henry renounces his past and all associated with it. This devastating news sends once merry Falstaff to an ample grave.

Next summer we will follow Henry V to England’s greatest triumph in the Battle of Bosworth which Winston Churchill compared to the Battle of Britain. We greatly anticipate hearing “Cry God for Harry, England, and Saint George!"