The Anchor Leg of a Sensational Season in Pittsfield 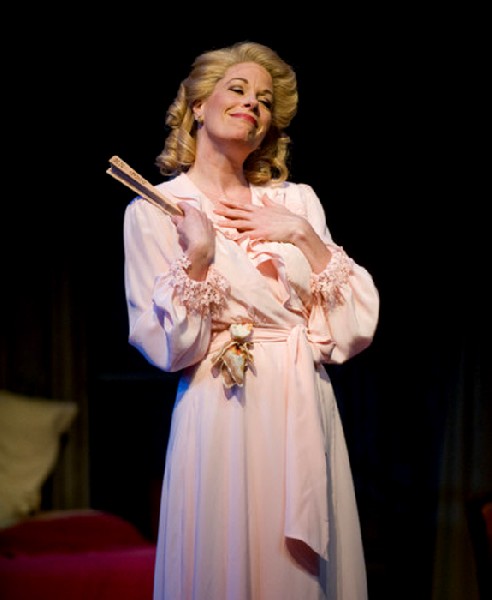 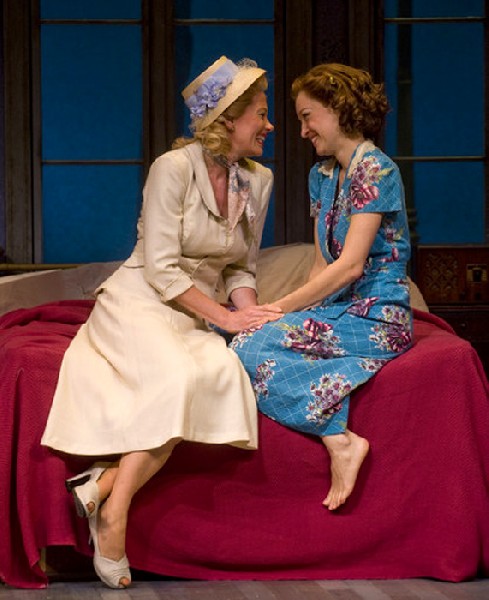 Blanche has some to stay with her sister Stella (Kim Stauffer) in New Orleans. 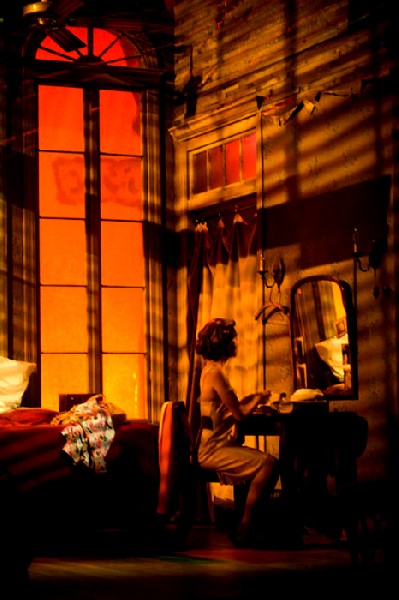 The moody set by Brian Prather with lighting by Scott Pinkney. 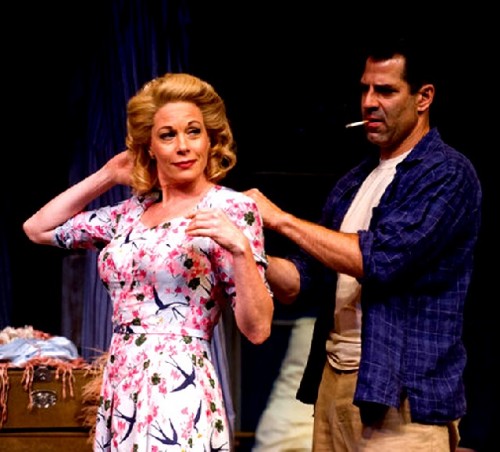 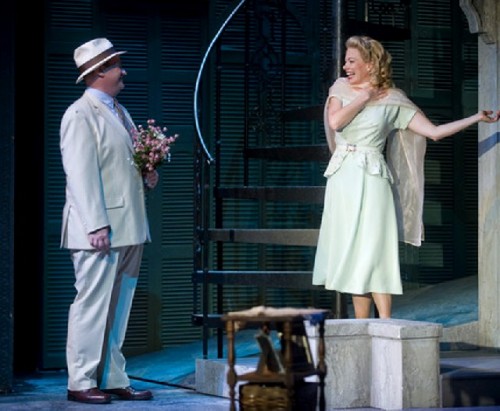 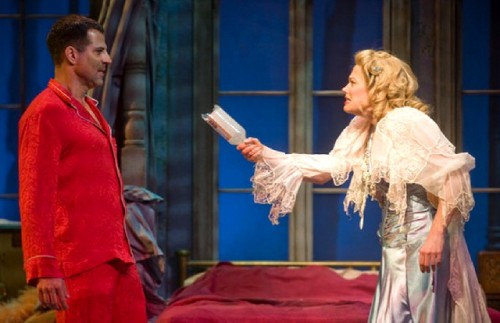 "Streetcar Named Desire" by Tennessee Williams is on the short list of greatest American plays of the 20th century. It was the play that, in 1947, launched the career of our greatest actor, Marlon Brando, then just 23, as the galvanic, sexy brute, Stanley Kowalski. The film version, 1951, directed by Elia Kazan, underscored the beginning of the sad demise of the remarkable Vivian Leigh. On stage the role of Blanche DuBois, a fading Southern belle devolving into madness, was played by Jessica Tandy. In the film Kim Hunter (Stella) and Karl Malden (Mitch) reprieved their stage roles. Leigh, Malden, and Hunter won Academy Awards for their roles. It is interesting that Brando, who was so remarkable in the film, indeed one of his greatest performances, was snubbed for an Oscar.

Initially Hollywood did not believe in or trust Brando. It was considered that in the role of Stanley Kowalski he was just being himself. This more accurately describes Leigh as Blanche. The Oscars succumbed to Brando two years after "Streetcar" when, in 1953, he was awarded Best Actor for his Terry Malloy in Elia Zazan's "On the Waterfront." In that film Karl Malden also appeared in a supporting role.

Having seen that film so many times those performances are deeply engraved into my subconscious. When teaching Aristotle's "Poetics and Theory of the Fine Arts" to a Humanities class we viewed "Streetcar" as a paradigm of tragedy. It seemed that I was offering the students a truly wonderful experience. When I asked them for their thoughts, however, a student replied that he hadn't liked it. Why I asked? "Because it was in black and white." Indeed, kids.

Having the template of that masterpiece and those remarkable performances made the experience of seeing this production at Barrington Stage Company difficult if not impossible. It was inevitable that one would undertake a Neo Platonic interpretation. The trope was to compare the accuracy, or not, with which the actors conflated with, or diverged from, those iconic performances. There was also the back story that Leigh, then married to Laurence Olivier, was in real life sexually promiscuous and a fading beauty. In 1951, then 38, as Blanche she had visibly aged from the Scarlet O'Hara of "Gone with the Wind" in 1939. Tennessee Williams would write another part for her the 1961 "Roman Spring of Mrs. Stone" where the faded beauty takes a gigolo, the young Warren Beatty. She died at 54 in 1967.

Theatre is a living art form and each generation is allowed, if not mandated, to bring new life and fresh interpretation to the classics. That said, initial productions and performances are also specific to the period in which they were created. That 1947 play, and 1951 film, are rooted in the immediate post war generation. The connection between Stanley and Mitch, for example, is that they were Army buddies. There is a line about Salerno which means that they fought in and survived the Italian campaign. It was also an era in which America evolved to a role of global dominance in industry as well as the arts. It was the precise moment when Jackson Pollock and Willem de Kooning were creating the paintings which stole the thunder from the School of Paris. Williams and the method acting of Brando were the pulse of a new wave of theatre. It was raw and as hot and humid as a sweltering summer night in the French Quarter of New Orleans.

In the film there is that stunning scene when Blanche first lays eyes on Stanley. To cool off he cracks a beer and pours it over his head. He is the crude and raw animal that Blanche both craves and hates. Vivien Leigh's close-up exuded lust and desire. There is none of that chemistry in this production between Stanley (Christopher Innvar) and Blanche (Marin Mazzie). Yes, Stanley does pour a beer over his head but the director, Julianne Boyd, shifts this to late in the play.

Today, the point may be lost but in 1947, with the emergence of a revitalized American culture, it is important that the play is located in New Orleans. It is the birthplace of the greatest of our art forms, jazz. We are reminded of this by the fine blues singing of Chavez Ravine and the guitar/ trumpet interludes of Thom Rivera who also plays the poker buddy, Pablo Gonzales. The musical director, Brian Usifer, has given us selections of what sounded like Louis Armstrong and the Hot Five, the soprano sax of Sidney Bechet, the piano of Earl Hines, and the Mississippi blues guitar of Blind Willie McTell. Of course those selections date from the 1920s and are at least a generation earlier than the time line of the play. The New Orleans legend, Fats Domino, who started recording in 1949, would be closer to the music of the Quarter during the era of "Streetcar."

With a running time of 2 hours and 52 minutes, as my derriere discovered, it was a long evening. The second and third act were merged into one. Overall there were eleven scenes. Despite the discomfort of sitting so long the third act went by in a blur. By then I was entirely absorbed by the remarkable performance of  Mazzie. Her descent into madness and that riveting line as is she led away to an asylum "Whoever you are- I have always depended on the kindness of strangers" is one of the great moments in modern theatre. Mazzie conveyed all of its poignant and harrowing delusion. Blanche had indeed lost the line between realism and magic. After a long evening it was a stunning climax.

Mazzie was a terrific Blanche. She is a truly gifted performer and three time Tony Award nominee. It was inspired that Barrington Stage has lured her to the Berkshires. What a treat. Is she a perfect Blanche? Well, not really. She is far too robust and strapping to convey the fragile flower of Southern womanhood of Blanche DuBois. Leigh reeked vulnerability in the role while Mazzie, in standing up to Stanley, was far too tough and testy. But she gradually brought us in and made us feel and care for her Blanche. Her performance made this production powerful and credible.

Just about everything about Christopher Innvar's Stanley seemed wrong. We felt his brutish and boorish side full measure but not his cunning. He was constantly bellowing his anger and rage. There was little or no nuance in the cat and mouse games with Blanche in which he was completely out matched. The scene in which he demands documents on the sale of the family property, in which he evokes the complex Napoleonic Law of Louisiana, is just leaden. It goes by with a thud.  Stanley should be clever and crafty looking into possible fraud by Blanche. He is supposed to convey to us that he is not a  "Dumb Polawk" as Blanche regards him. It falls flat when Stanley states that he is a "Pole" who was born in the USA and proudly served his country. We are unconvinced as Innvar's Stanley is indeed rather oafish and  dumb.

The supporting roles of Stella (Kim Stauffer) and Mitch (Kevin Carolan) were both terrific. Stauffer has the challenging assignment of conveying how she is indeed a well bred Southern lady, a DuBois, but married to the coarse and common Stanley. It is implied that it all happens between Blanche and Stanley when the lights are out. They are expecting a child. Stella must also convey unquestioning loyalty to a sister in need. Even though Blanche despises Stanley and their primitive living conditions.

The role of Mitch conveyed the brilliant and complex writing of Williams. Malden played him as a homely, unloved man with a cabbage of a nose. How on earth could a great beauty like Blanche be attracted to him? Carolan is very convincing in the role. Where the script has Mitch state that he is 6'2," and weighs just over 200 pounds, that didn't jibe with the appearance of Carolan. He is shorter and more pudgy.  Carolan powerfully conveys the Mama's Boy who is dominated by Stanley but woos Blanche.

This comes crashing down, and marks the precipitous decline of Blanche, when Stanley digs up the dirt on her. It seems she left her teaching position and home in Laurel, Mississippi in disgrace as the town pump. There is a back story of the suicide of her closeted husband. After that, like Leigh in real life, she took on a parade of lovers including soldiers from a nearby Army camp. Mitch confronts her about escapades at the Flamingo Hotel. But fighting for her last shred of dignity and sanity Blanche corrects him that it was the Tarantula Hotel where she consumed her victims.

This was a very good production of "Streetcar Named Desire." It is sure to be a hit concluding a terrific summer season for Barrington Stage Company. The set by Brian Prather accurately evoked the smarmy charm of the French Quarter. The lighting of Scott Pinkey conveyed all the right colors and mood. The costumes by Elizabeth Plauto dressed Blanche perfectly while rendering Stella suitably plain.  With a better casting of Stanley this might have been a truly great "Streetcar." The difference is in the details.