What's Up at the Metropolitan Opera? 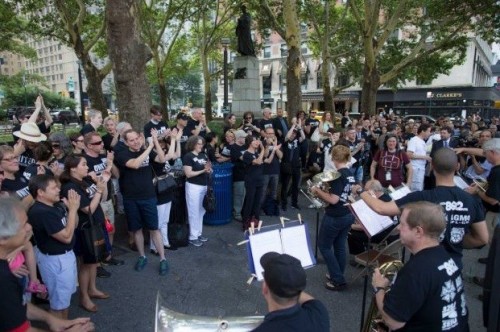 Reliable sources report from inside the Metropolitan Opera.

The Metropolitan Opera negotiations are complicated and union members are grateful for the help of Federal mediators.  The unions that have settled took a big hit on their health insurance plan and also in sick leave in order to settle their contracts. They went from having the most amazing health insurance imaginable to a mediocre plan. By and large, these unions are grateful to have health insurance at all, and are glad to have a contract.

The other groups have a more complex situation. It is true that many of the unions, especially Local 1 (stage crew), 802 (orchestra) and AGMA (chorus) make a lot of money. However, they really work hard for their earnings.

In general, base salaries have remained stagnant, and not kept pace with cost of living increases in New York. The unions that settled had tiered bargaining up until this year.

The bigger unions have made the impressive salaries quoted in the press largely because of overtime. Frequently the highest numbers quoted apply only to the senior-most members in each union and are not necessarily reflective of the group as a whole.

How the overtime and "skyrocketing labor costs" have become an issue is because of Gelb's new productions. While we have repeatedly pointed out that wealthy people who want their names highlighted underwrite the actual cost of the new productions, no one can quite determine whether these ‘production grants’ include labor costs.  If they do, then all new production costs are a one-off underwritten by a named sponsor.  If not, then the unions are correct to point out that Gelb's production management, the most egregious being "The Ring," is to blame.   In a documentary paid for by the Met and shown often on PBS, it is stated clearly that the set was not ready when it was shipped to New York.

Putting together a new production requires geometrically more technical and rehearsal time than is required for a repertory production. This means the union members get paid extra because they are working more hours. Also, there are certain work rules in place, which are intended to protect the union members from being overworked/abused. These work rules are routinely broken by management, resulting in additional overtime and penalty payments to the employees.

All those proposals were rejected. People who work for the Met feel that management basically wants whatever it wants and is unwilling to adapt to protect the stage crew or to save money.

There is a similar issue with the chorus and orchestra. They are expected to rehearse for upcoming operas during the day and then launch right into an evening performance afterward, sometimes with very little break between. This creates considerable strain on their voices/bodies. This is why there are work rules in place. The work rules are intended to protect them, but frequently management ignores them, resulting in overtime and penalty payments.

Here is an interesting article written from the point of view of a chorus member.   Simply stated, Gelb wants everyone to be available for unreasonable hours of work, but doesn't want to have to pay them the overtime required for working beyond acceptable limits.

Some of the orchestra members and all of the stage crew get their health insurance through their unions. The Met contributes toward the premiums, but the employees are already contributing toward their health care costs. Why is the Met complaining about this? The union members who are on union health care plans are on an inferior plan to the one the Met offers and also contribute their own money toward the plan.

Members of the Met staff are worried about how things will turn out, and hope the stage crew, the chorus, and the orchestra will get fair settlements. The fact that there's a mediator involved is a good sign.

The jury is still out on when the season will actually start. From what we understand, the bulk of the rehearsals for the Marriage of Figaro have already been completed, so it may be possible for the House to be ready for opening night.

One rumor circulating is that Gelb will plan his lockout during the scheduled rehearsal time for Death of Klinghoffer, so that he can cancel the production. This would mean that he could extricate himself from its publicity disaster and blame the unions for it.

The independent budget analysis is supposed to be completed by August 11th. We will see how negotiations go forward after that.

Note: Contract negotiations with Local 802 and AGMA have been extended to Sunday, August 17th.  Local 1 is watching what happens.