Moulin Rouge! The Musical on Broadway

Easy on the Eyes but a Mishmash 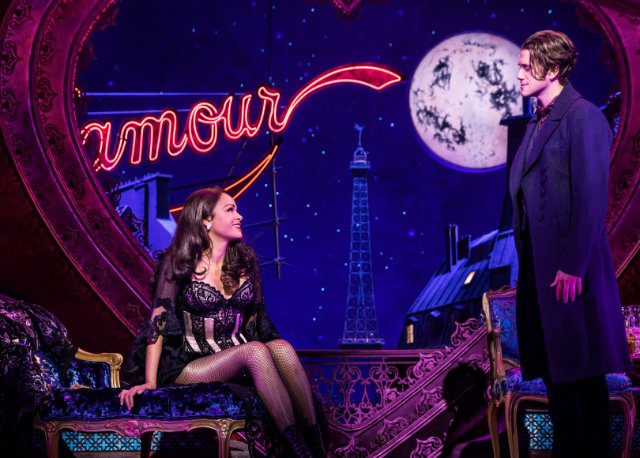 As you walk into the Al Hischfeld Theatre for a performance of Moulin Rouge! The Musical, you will be blown away by what you see. The visual affects – scenery, costumes, projections, lighting – are opulent and spectacular.

They (Derek McLane, Catherine Zuber, Justin Townsend) have created 1899 Montmartre in front of you complete with the iconic red windmill of the Moulin Rouge. On your right is a papier m?ché elephant head.

Actors are posing on stage in gorgeous costumes and sometimes they interact with the audience. The stage projects into the audience and a lucky few sit a tables between the stage and the walkway.

Then the show begins. How you felt about the Baz Luhrmann film of the same name will influence how you view the musical.

For the basic question is: Are visual affects enough to keep an audience interested for two and a half hours?

For those not familiar with the movie, it, too, was known more for its affects than its music or story.

In reality both works are mashups musically and in plot.

The music is drawn from everywhere. Songs from throughout the last hundred plus years are put together in various ways. Madonna’s “Material Girl” is mixed with “Diamonds Are a Girl’s Best Friend” in one of the more effective combinations. But then one must wonder why a song like “Nature Boy” shows up in the show. Sometimes you only hear a brief snippet of a song.

It is said that acquiring all the rights and figuring out the royalties was a nightmare. More than 70 songs are included and royalties were often due to three or more people (composer, lyricist, performer, etc.). I’ve heard that finally they calculated the length of each snippet, what percent that was of the entire score, and the royalties were based on that.

But the mashups don’t end there. The plot is also a mash up. It begins like Cabaret with an Emcee, in this case the marvelous Danny Burstein as the manager of the club, coming out. Makeup and costume are garish, and his attitude is lewd.  A few minutes later, Christian appears. Played by Aaron Tveit, he introduces himself as an American writer who has come to Paris for inspiration, á la Clifford Bradshaw in Cabaret.

But then the plot decides to draw on other sources: La Boheme, Phantom of the Opera and any melodrama with a controlling, evil wealthy aristocrat.

So to explain the plot — the club is in financial trouble and Harold (the owner/manager) and his star Satine are desperate to keep it open. The Duke of Monroth is taken with Satine; he may bankroll the club for some intimate time with her. But then there is Toulouse-Lautrec and his friend Santiago who introduce Christian to Satine. They want the club to put on their somewhat radical play. Guess what happens? After some mistaken identities – Satine thinks that Christian is the Duke, they fall in love. Of course all is not smooth.

At least act one moves along; it is in act two that things slow down and I began looking at my watch. The plot takes over with the rehearsals of the play, the Duke’s objections and suggestions, the love between Satine and Christian, and the Duke’s growing jealousy and demands as well as Satine’s illness. She’s dying of consumption! Like most heroines, it barely shows except for an occasional clutching in the general vicinity of her appendix or ovary and towards the end some coughing of blood.

When the spectacle wears off, we are left with the work itself: the direction, choreography and performances.

Choreographer Sonya Tayeh has drawn on every over-done cliché move from music videos for the majority of the dance numbers. You’ve seen it all before and it wasn’t memorable the first time.

Alex Timbers the director focuses more on the effects – including a trapeze — and movement than on trying to develop any real feelings from the characters; these are flat, stereotypes. It is to the actor’s credit when any emotional truth sneaks in.

The cast works hard, but they have varying degrees of success partly based on the development of the characters they play.  Danny Burstein as Harold (the club owner/manager) and Karen Olivo as Satine (the star) are most successful because they are the most completely developed and complex characters.

If you have any emotional reaction to the work, it is due to these two performers. Tam Mutu also imbues the Duke with some depth but the role is that of a typical villain and not much more is available for him to work with.

Christian, the American writer who falls in love with Satine is played by Aaron Tveit. The role is one dimensional and Tveit doesn’t do much to add anything to it. Plus, while his voice his good and he is attractive, he seems at times both wooden and lacking in any charisma with Olivo. It’s hard to believe they fall in love.

As Toulouse-Lautrec and Santiago, the two who have prepared a play, Sahr Ngaujah and Ricky Rojas do what they can with underwritten parts.

The program does not include a song list so it’s difficult not only to know what songs were included but who performed them.

Let’s say that Moulin Rouge favors surface spectacle over emotional depth. Many will be enthusiastic about it, but many others will wonder what the fuss is all about.

Moulin Rouge! The Musical  is at the Al Hirchfeld Theatre, 302 W. 45th Street. Tickets are available through Telecharge.

Posted courtesy of two on the aisle.