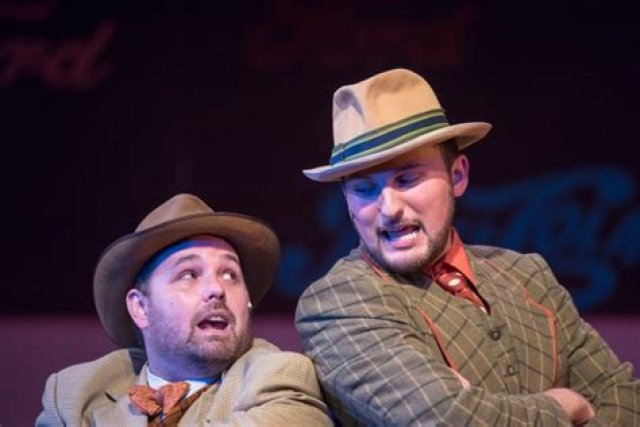 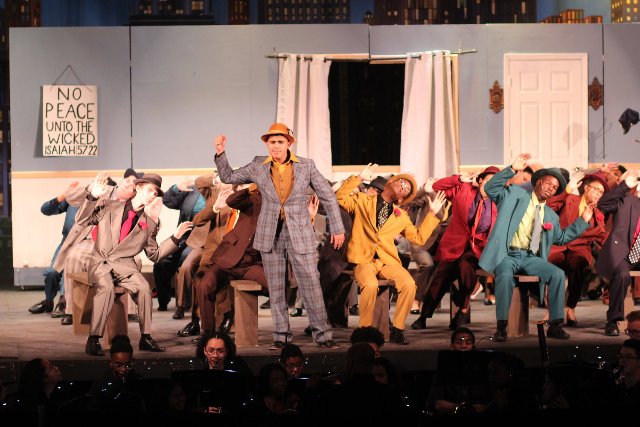 Guys & Dolls heralds Sharon Playhouse’s return to live theater. And it is a “must see.”

The production through Sunday, Aug. 14 is well worth a trip to this scenic Litchfield county town.

The company features four Equity performers in the leading roles and an 8-piece band.

Guys & Dolls is one of the classics (and I’d say masterpieces) of the Broadway musical. Words and lyrics by Frank Loesser and roster of songs that have become standards.

But it isn’t an easy show to put on. I’ve seen at least one poor production on Broadway.

That this rather small theater in a relatively remote area has produced such a fine show it is a reason for applause.

If you have forgotten the show, Guys & Dolls is based on stories by Damon Runyan about the gamblers, missionaries, show girls and others who inhabit the Broadway area. It has two interlocking plots and romances. Nathan Detroit organizes crap games and his longtime fiancée Miss Adelaide who is the “star” at the Hot Box Café. After fourteen years, Miss Adelaide wants to finally get married. The other plot concerns one of the gamblers (Sky Masterson) and the leader of a Salvation Army-like mission in the area, Miss Sarah Brown. To win a bet, Sky tries to get Miss Sarah to go with him to Havana.

Director/choreographer Justin Boccitto has done a great job overall. BUT, he seems to be in love with tap dancing. I like tap dancing and in fact can’t wait to see the cast of 42nd Street at Goodspeed tapping to all those 1920-30’s songs.

Guys & Dolls is set in the later 1940s when tap wasn’t that big. It seems that everyonetaps all the time. The three horse players tap during the “Fugue for Tinhorns;” Miss Adelaide and the girls tap in “A Bushell and a Peck;;’” the gamblers tap during “Sit Down, You’re Rockin’ the Boat.”  Not only does it become repetitions, but it adds length to a show that runs over two and a half hours.

This production has so many positive things starting at the very beginning with the sound design by Daryl Bornstein. Not only are the vocals well balanced, but the ambient sounds of Times Square really set the mood. Then we can move on to the costumes by Michael Bottari and Ronald Case. These not only represent the period but help us define the characters. They are garish without being clownish.

But we can’t overlook the scenic design that includes the skyline of New York City. Karla Woodworth is listed as the scenic artist.

Yet it is the cast that makes this such a good production.

Each of the four main characters brings something special to the production. While C. K. Edwards isn’t my idea of Nathan Detroit, he certainly can sing and act the part. He gets the laughs needed and his work in “Sue Me” is good. As Adelaide, Lauralyn McClelland puts over the Hot Box Club numbers as well as “Adelaide’s Lament.” She has fine comic timing. In the more straight romantic roles, Amanda Lea LaVergne does full justice to Loesser’s ballads – “If I Were a Bell,” “I’ve Never Been in Love Before,” and others. She is well balanced by Robert Anthony Jones as Sky Masterson. He has a terrific voice for not only “Luck Be a Lady” but also for the romantic “My Time of Day,” and “I’ll Know.”

Both Joshua Spencer as Nicely-Nicely Johnson and Dom Giovanni as Benny Southstreet do fine work. Spencer is terrific in “Sit Down You’re Rockin’ the Boat.”

Treat yourself to a visit to Sharon Playhouse and the fine production of Guys & Dolls.