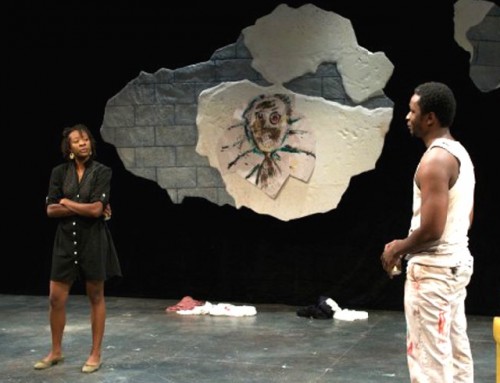 Donna, Miriam Hyman, visits Tommy (Bowman Wright) in his dump of an apartment with his self portrait tacked to the wall. Kevin Sprague photos. 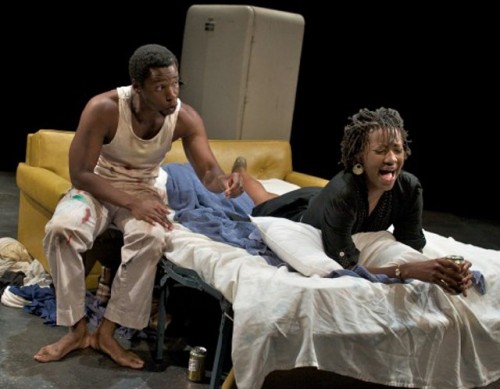 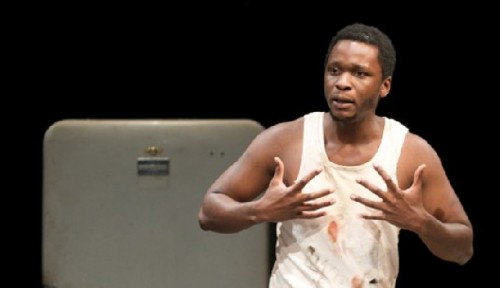 Tommy has seen God in his refrigerator. 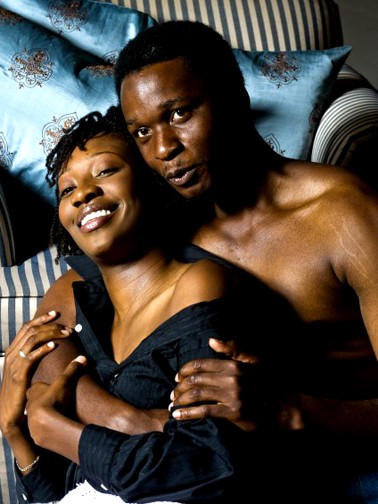 Donna can’t resist lusting for Tommy despite the fact that he has seduced her sister. 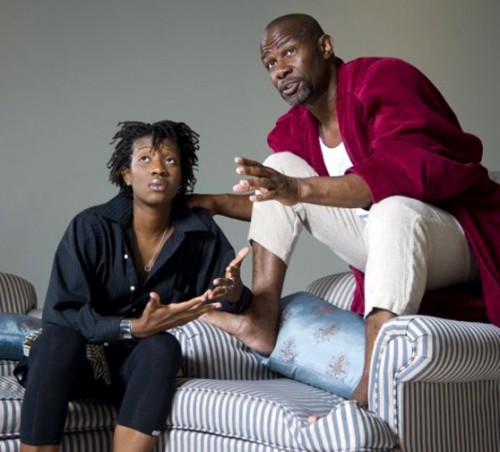 Donna seeks the advice and love of her father, John Douglas Thompson. 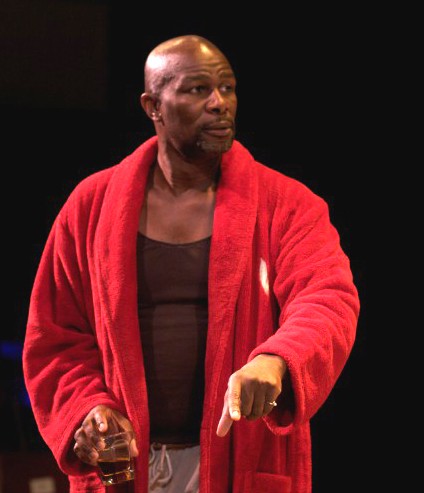 At home in a red robe Dad is slowly drinking himself to death. 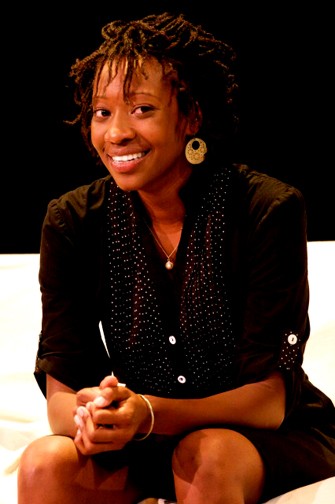 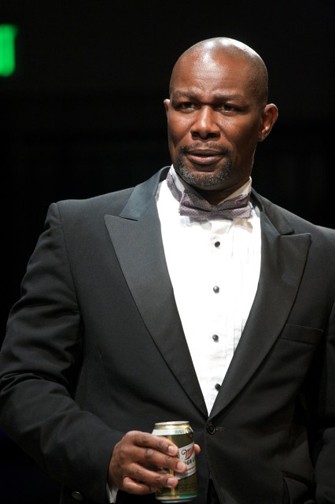 Why is Dad wearing a tuxedo at the end of the play?

"The Dreamer Examines His Pillow" (1985) was the fourth of currently 24 plays and ten screenplays by John Patrick Shanley (Born 1950). The night before attending "Pillow" at Shakespeare & Company, through September 6, we watched a DVD of "Doubt" with Meryl Streep, Philip Seymour Hoffman, and Amy Adams. It won a Pulitzer Prize and Tony for  its Broadway production and earned Shanley an Oscar for best adapted screenplay.

We came to the S&Co production primarily in anticipation of the performance of the remarkable John Douglas Thompson. He has electrified Berkshire audiences these past two seasons for his Othello. Clearly an accomplished Shakespearian actor we were eager to see him in a contemporary role. Casting him as Dad in the Shanley play, resulted in two other black actors, the daughter Donna, Miriam Hyman, and troubled boyfriend Tommy, Bowman Wright.

Since the premiere of the play it has regularly been performed by white actors. The drama is about identity, loss, the blinding power of sex, and relationships. In that sense the play is not about ethnicity although this production compels us to consider the race of the characters. We observe how they present themselves, the special flavor and intensity of language that is conveyed in their crisis. This a very wordy and poetic play.

The decision to cast Thompson as the fulcrum of this drama was bold and brilliant. This demanding and harrowing play a great vehicle to present the full range of his powerful but often restrained and understated skills. He conveys the character with such fluid ease and conviction that there is no sense that he is speaking the lines of a script. The measure, cadence, ebb and flow of the delivery come with a compelling naturalism. Not to say that this is method acting. Rather it is the performance of a classically trained actor bringing all of that skill and discipline to a contemporary character. It confirmed a prior conviction that Thompson is one of the great actors of his generation.

One measure of this is the manner in which the performances of the two other very gifted actors, Hyman and Wright,  ratcheted up and intensified during their scenes with Thompson. He gives them a more refined sense of timing and pace. They both seemed to slow down and settle into their thoughts. We were more drawn into who they were and the nature and burden of their conundrums. With young actors they are often more convincing expressing anger and rage than pulling back into quiet reflection. They are more adept at elevating than subduing their emotions. In their scenes with Thompson it was most effective when they backed off. This was a true litmus of their craft and maturity as actors.

In another "bare pipe" S&Co production Tommy is living in what Donna describes as a "shit hole." She wonders if there are bugs. There are. The minimalist set by Christian Schmitt contains a few items of Goodwill furniture including a beat up refrigerator and infested,  pull out couch. There is ersatz wall with broken plaster revealing cinder block. Cloud like shapes are hanging here and there. On the largest, amoeba like form is stuck, nailed, a primitively drawn "Self Portrait."

Having stolen the $200 a month rent money from his mother, part of his "revenge" and anger against women (including Donna), Tommy wants to find himself through art. "That's me" he insists in dialogue with Donna. But he has no talent. Especially compared to Dad a successful artist who no longer paints. From time to time Tommy worships and speaks to his refrigerator. It is where he keeps the beer but also the source of the dark hole of memory. Or, in the trope of the title of the play, his dreams. In one passage he screams at the refrigerator as a portal to God. It seems he found God on the battlefield (Vietnam?) as the bombs were falling.

After his opening delusional and disturbing soliloquy Donna arrives banging loudly on the door. He is reluctant to let anyone in. This dungeon, cave, shit hole, studio is where, in solitude, he faces his demons and is struggling to find a muse through art. "Open the fucking door," she demands. Charging in Donna is a firebrand of intensity polarizing love as well as hate. She verbally assaults him yet will let him fondle and embrace her. The physical craving for him drives her to the edge of madness. Donna is fighting to control this passion. She forces him to confess that he has been "porking" her sixteen year old sister in the year since they broke up. How can you do that to me she wants to know?

We wonder just what she sees in the lost and confused Tommy. He appears to be a worthless piece of turd much like the apartment he lives in. There is no sense of ambition and responsibility. What can he possibly offer of value? Yet, love is blind.

Stage hands morph the set. In the semi darkness we see the "clouds" come down. The bed is collapsed back into a couch which is covered in a white slipcase. There is a clean white rug rolled out and a few props of tables and chairs. Donna arrives to seek advice from her estranged father. He is seated on the couch in a red bathrobe drinking in solitude. When she arrives he insists that she remove her shoes.

This conveys the notion that while alone, by choice, and drinking to drown demons (Dreams) and misery, he is controlled and disciplined. He doesn't seek human contact least of all from his daughter. Following the death of his wife, whom he cheated on and abused, his life and career have imploded. He is no longer able to paint. But a cache of paintings have been sold leaving him well off. It allows him to afford self imposed exile. There is an aura of  autocratic excellence about him. Shanley is fascinated with him as an artist and the issues of the rise and fall of his creativity. The work was inspired, initially, by a search for self and identity and, just as forcefully, evaporated through disillusionment, contempt, and self pity.

As Donna comes to her father with mixed feelings she seeks his love, support and insight. They have not been together for a couple of years. He is ill-equipped for any of this. It means that he will have to abandon his slow suicide through alcohol and actually care about another human being; his daughter. He has wonderful lines about that burden and misery. She hates him for what he did to her mother. But she also evolves to discover that she is becoming, like her mother; a victim of  Tommy. Her lover is terribly like her father.  It is all too common that women fall for men like their fathers. With the difference that Dad is/ was a successful artist while Tommy has no talent.

Donna demands that her father will answer three questions: Love, sex, and why he no longer paints. The father evolves as an oracle. He is indeed wise and replete with hard earned, life experience. Her quest draws him back from the edge of despair.

The daughter in turn reminds him of his lost wife. It seems he loved her too much. The sex was devouring and so consuming that he risked losing himself in passion for her. Is this an instance of vagina dentata?  His answer is that "sex is for making babies." It seems that he took a mistress as a release from that emotional, all consuming fornication with his wife. "My baby" he refers to her plaintively. We are surprised that he speaks with such tenderness of the woman he so abused. Interestingly these are emotions that Thompson explores in "Othello."

With the girlfriend it was just sex. Until he awoke from a dream when his wife was ill and just threw her out. It was when he "examined his pillow." The dent left by his head became a black hole and bottomless pit. It's when the muse died.

Having asked her questions, Donna now demands that Dad will confront Tommy. If he finds that the boyfriend is like him, her greatest fear, she wants Dad to beat him up. Reluctantly he agrees. In their scene together Dad and Tommy are indeed alike. Even in squalor Dad sees Tommy's struggle through art to find himself. It is a quest that is just beginning for Tommy but now ended for Dad. The arc is there compellingly.

Having made that discovery and revelation what will now happen to Donna? Well, for that you will have to visit S&Co. Expect to be shocked and surprised.

Thanks to the superb and subtle direction of Tod Randolph, S&Co. has given us one of the finest plays of the Berkshire season. John Douglas Thompson, Miriam Hyman and Bowman Wright have conflated into a magnificent performance. We staggered out of the theatre dazed, shocked, confused and provoked. Be there.