Much Ado About Nothing at Barrington Stage 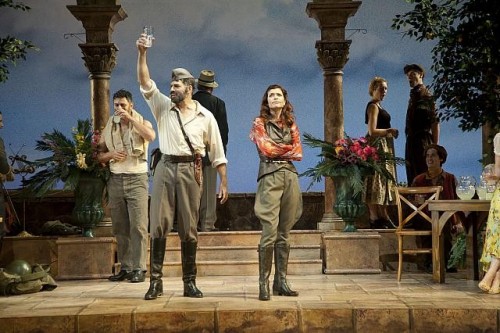 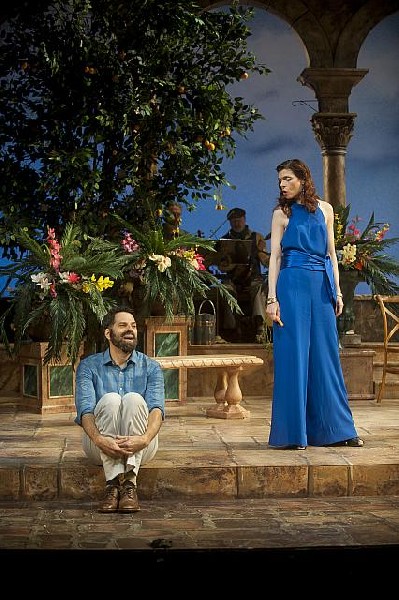 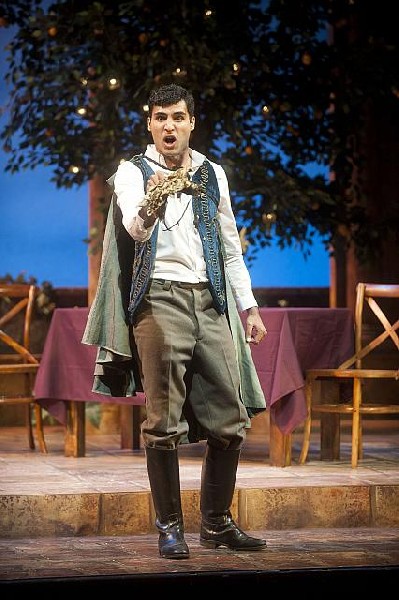 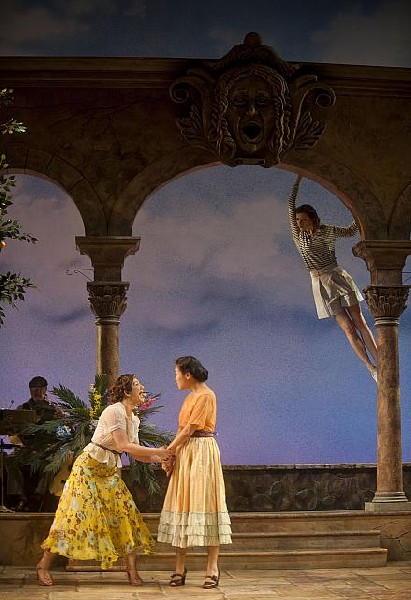 Beatrice risks life and limb to spy on her friends. 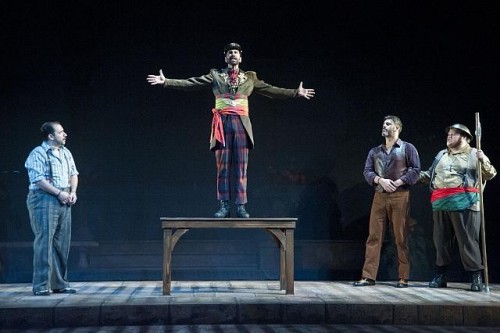 The absurd constable played by John Cariani up on table. 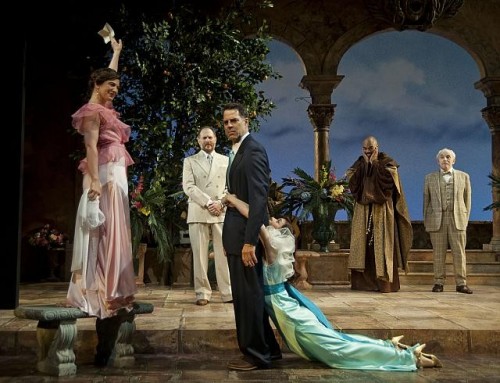 The man who almost got away.

For its first Shakespeare at Barrington Stage Company Julianne Boyd has produced and directed a divine and sublime Much Ado About Nothing. With a truly hilarious cast it enchants and delights Pittsfield audiences through August 25.

This remarkable production of one of the most magnificent classical comedies sets a new bench mark for the Bard in the Berkshires. While the four major companies have presented Shakespeare, with one entirely devoted to the playwright, Shakespeare & Company, Boyd brings a fresh new take.

It has that je ne sais quoi or sine qua non touch that is so unique to the magic and chemistry of what Boyd evokes from her company and its stellar actors.

This production reveals a truly hilarious new side to the always solid Christopher Innvar as the confirmed bachelor Benedick a Lord of Padua. It is dream casting to watch him match wits with the magnificent and uniquely gifted Gretchen Edolf as his love/ hate nemesis Beatrice the niece of Leonato (Philip Kerr) the Governor of Messina.

If the leading actors are fabulous they are in a run for the money with so many superb supporting and minor roles. Barrington regular Mark H. Dold has a mean spirited, elegant and smarmy turn as the jealous villain Don John the bastard brother of Don Pedro the Prince of Arragon (David Bishins).

As Dogberry, a pretentious constable with a flair for malaprops, John Cariani with a combination of verbal wit and absurd physical comedy, totally steals every scene he is in. During curtain calls his applause was as tumultuous as for Innvar and Egolf. The audience was evidently delighted with his total gonzo performance. What a silly Billy.

Which is to say that much of the best comedy of this production was not on the page but in the inspired collaborations between the director and a superb cast to bring out so many comic nuggets. Her staging and sight gags were full of delightful invention. Including reaching out to and directly engaging the audience seated in the front row.

Clearly there was a lot of improv including great shtick when Beatrice and Benedick hid behind huge flower pots or awkwardly dangle from an arch overlooking the terrace to catch the drift of their love entanglements.

While glib and fierce when they exchange barbs it seems that Benedick is twisted and tongue tied while trying to compose a love sonnet to Beatrice. In the midst of that scene his pencil rolled off the table. Twice. The audience gasped when rather than put it back on the table, never missing a beat, he tossed it into the wings. Nice catch. It evoked a round of applause from the audience.

This production was beautiful to look at with a period, 1930s terrace in Sicily designed by Michael Anania. It was deftly reconfigured to convey different scenes including the fake funeral of Hero (Christina Pumariega) with a Romanesque relief carved coffin. There was also deft lighting design by Philipa S. Rosenberg and delightful ambient music composed by Andrew Gerle.

The costumes by Sara Jean Tosetti were just gorgeous. She did a terrific job of dressing the tall, slender, elegant Egolf. It’s no secret that Boyd presented her as an ersatz sophisticated Katherine Hepburn. Particularly in stunning blue silk slacks with easy flowing grace. The pants later returned accessorized with a splashy red blouse. Tosetti had the men decked out in trim Mussolini period Fascist uniforms. The play is set during a time of relative calm before Il Duce partnered in crime mit Der Fuhrer.

While this iconic play of Shakespeare is discussed as a progenitor of the witty screwball comedies of the 1930s, during the period in which it is set, there is also a ghastly, sexist dark side.

There is that whole ugly thing about the purity of women who must bleed on their wedding nights. In Sicily they used to hang the sheets over the balcony for all to see.

The plot here is that Hero may not be pure as the driven snow. This is a ugly concoction of the evil Don John and paid accomplices.

At the altar her groom Claudio (Babak Tafti) is no gentleman flinging her to the ground with false accusations. It was not an era when couples seeking marriage certificates were required to take blood tests to screen for STD.

On the wedding night the bride was expected to be a virgin but the groom was not. Nobody asked him tough questions or threw him about on the ground.

Of course, what else is new. Particularly in Sicily.

At the conclusion of the mess Hero is all too delighted to take back the abusive Claudio. Then again, what were her options? The grave? Or the Nunnery? Alas a sucky marriage to a bounder, womanizer and cad. What's a girl to do?

On a more positive note now that Benedick has come to his senses, and done the nasty with the clever and feisty Beatrice, it is clear that she won’t put up with any of his macho crap.

Oh those Sicilians. It’s what Julie and I have in common and why her play, for me, e anche molto molto bellissimo amore. Brava.