See How They Run at Barrington Stage Company 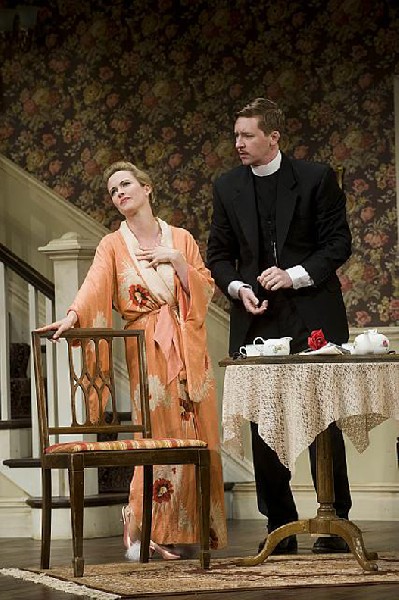 The Reverend and Penelope Toop at home. Kevin Sprague photos. 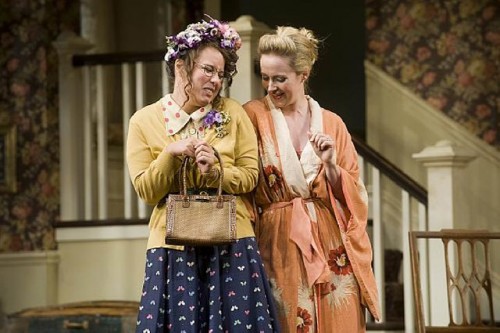 Ida the Maid as a word with Penelope. 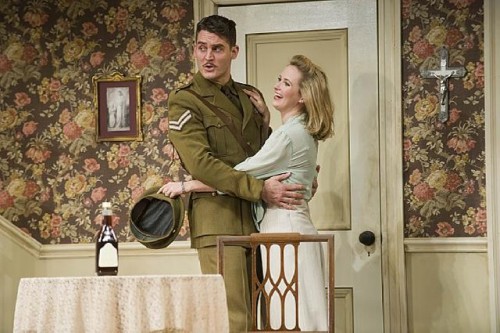 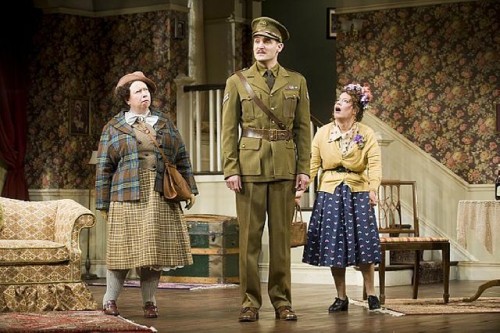 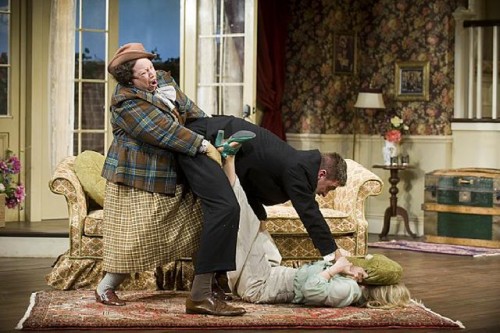 A tumble on the floor. 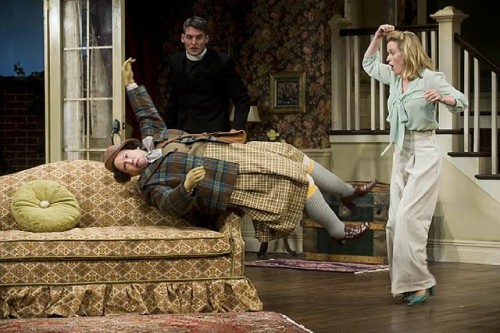 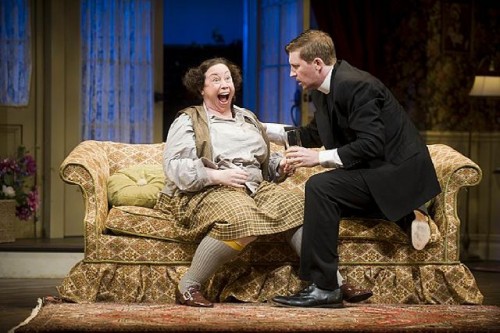 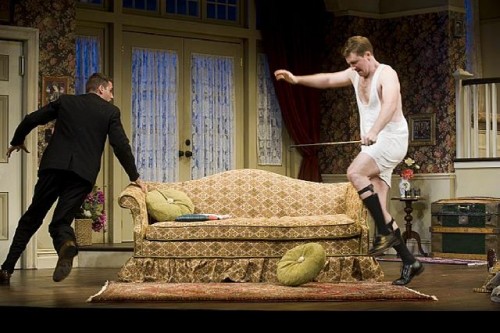 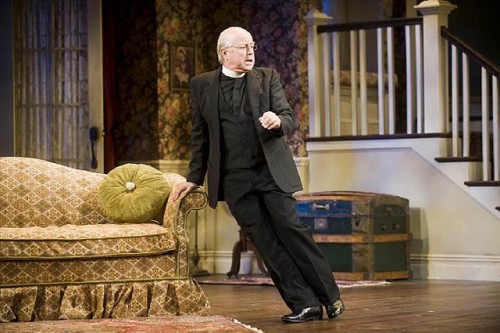 Arguably, nobody does farce quite like the British. Or better than Barrington Stage in this side splitting production brilliantly directed by Jeff Steitzer with tons of sight gags and gobs and gobs of physical comedy.

Like four lumps of sugar in your afternoon tea.

Or, for many of the bonkers cast members, way too much sherry and brandy. All for a good slog about the old sod.

After a heavy duty season at Barrington, with lots of gravitas, it was fun to end it positively silly billy.

Yes this is a bit vintage you know, WWII and all that. Like a plot point about an escaped German prisoner of war (Jim Schubin). Sure, that’s a bit dated, but this laugher hardly shows its age.

The hilarity started from the first moment that the wonderfully played Ida the Maid (Dina Thomas) struggled on stage with a tray of tea and biscuits. From then on it was a roll in the aisle until the screwball plot got knitted up at the end of three acts. The first two were conflated with an intermission before the third.

As the ditsy Ida called the Vicar (Cary Donaldson) and his wife, Penelope (Lisa McCormick) a former actress, to tea we hear her singing and practicing vocal exercises upstairs.

The appearance of the busy body parishioner Miss Skillon (Michele Tauber) evoked a belly bouncer. Her outfit and frizz of hair in two tufts, under a silly hat, was wonderfully designed by Sara Jean Tosetti. To just set your eyes on the ridiculous Miss Skillon evoked gales of laughter. She milked the part for all its worth. Her situations and predicaments became ever more monstrously farcical, including a gag about revealing her pink lace bloomers. It is something you don’t want to see and sent shock waves through the Vicar.

As an arbiter of propriety, ever village has one, the local prig, she wants to have words with the Vicar about the outrageous behavior of his wife of one year. First, she presumed to arrange the flowers on the altar, Miss Skillon’s long term duty, then she has been seen Wearing Pants in the village, and even publicly waving to a soldier driving by in a lorry.

There are words when Mrs. Toop at last comes to tea. Miss Skillon should then leave but it seems that Ida, while putting her bike in the garage, managed to puncture the tires. By a sequence of events there is a running gag as the besotted old maid ends up staying the night.

Yes, there are the five doors of farce with lots of slamming about.

Things, as they say, get complicated.

The soldier Penelope waved to turns out to be an old beau and acting partner Clive Winton (Michael Brusasco) stationed locally. He pops in to say hello while nobody, but Ida whose lips are sealed, is home. Seems that Private Lives, which they toured together, is playing in a nearby village. Wouldn’t it be great fun to see it?

Hitch is that it’s off limits for the Lance-Corporal. But, she suggests, what if he changes into one of Reverend Toop’s outfits? Then The Intruder steals another outfit leaving Reverend Toop in his skivvies. That devolves into three possible Reverend Toops. Yes, I know this isn’t making any sense. Add to that, Penelope’s uncle The Bishop of Lax (Keith Jochim) and Reverend Arthur Humphrey (Jeff Brooks) who is coming to say mass instead of Revered Poop. In the meantime Winton will impersonate Humphrey. So there will be two Humphreys. Got that?

The physical comedy directed by Steitzer is just fabulous. When the real Reverend Humphrey arrives, for example, Ida pulls off his long scarf sending him spinning like a top. Brooks performed this wonderfully ending up in a dizzy whirl bracing himself on the edge of the couch as the audience was beside itself laughing.

Recreating their fight scenes from Private Lives Penelope and Clive go at it witnessed by the snoopy Miss Skillon. She wrongly assumed it to be domestic violence and even gets a final knock out blow from Penelope which sends her sprawling.

It just gets sillier and sillier.

No point explaining it all. Just go see for yourself. What a hoot.