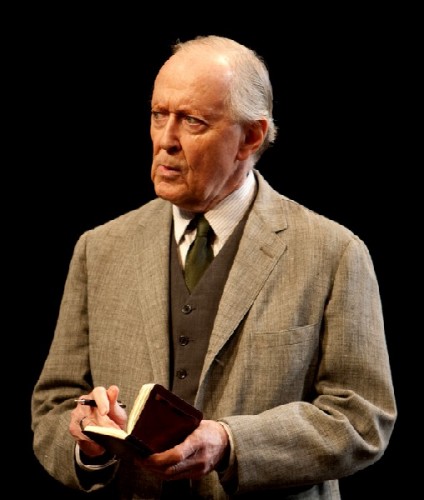 Eddie Loomis (John Horton) is a partner in running the school. 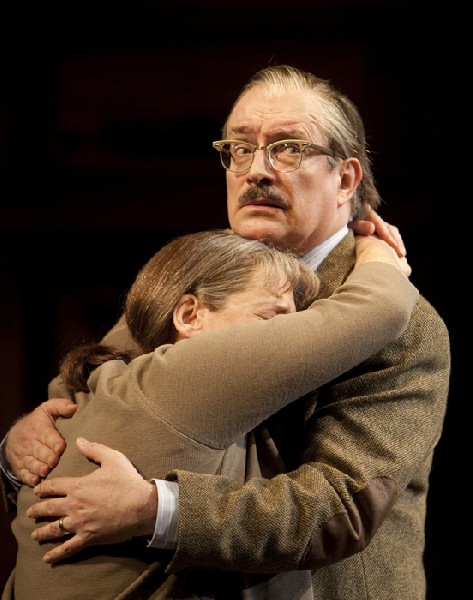 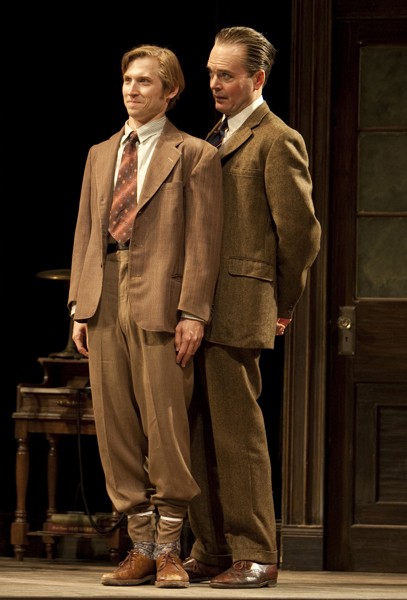 Sinjon is covering the back of Derek (Jeremy Beck) who has ripped his pants during the first day of the term. 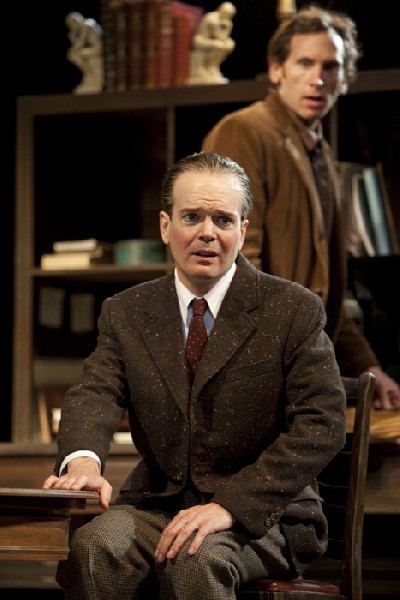 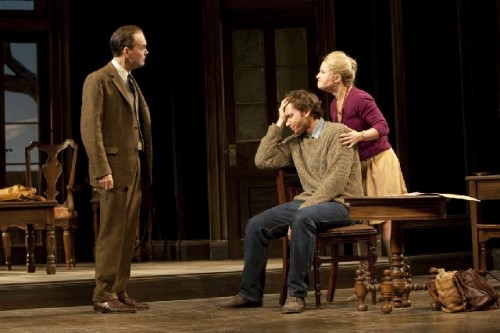 In a well appointed set by Derek McLane the 1983 play "Quatermaine's Terms" by Simon Gray unfolds in the "Staff Room" of the Cull-Loomis School of English for Foreigners, in Cambridge, England. Over two acts and five scenes we view the interactions of the lives of seven teachers over two and a half years during the 1960s.

It is a hermetic even claustrophobic environment with little sense of the events that would shake up British society in the era of the Beatles. Rather this seems an isolated hamlet or oasis where little changes. In the "Love Song of J. Alfred Prufrock" T.S. Eliot wrote that "I have measured out my life with coffee spoons." It is a metaphor for how repressed Brits dole out their mundane, decorous lives. Like the characters in Gray's play. Will that be one lump of quiet desperation or two? Lemon? Or milk?

There is significance that the characters are identified as "staff" and not "faculty." While this is an academic setting, in venerable Cambridge, there is no intellect implied. These are teachers not professors. They are paid to do a specific job, teach English to foreigners. Not to think or espouse a body of knowledge. This is about practical skills and in that sense they are not artists or intellectuals but lumpen proletariats. They have nothing to lose but their chains. With a British sense of irony and humor they wear them as fine jewelry. God Save the Queen.

The milieu of Gray appears to be the well mannered ennui of Post Colonialism. With the Empire lost and Great Britain devolved into a second tier world power there is nothing left but a superannuated sense of etiquette. The delusion at the Yalta Conference that Churchill was a part of the Big Three has fallen on hard ground. The sun has set on the British Empire.

In that "Staff Room" we are invited to care about these terribly ordinary people however well crafted and defined as characters. Truth is, particularly in the first act, it is a tough slog. The action, such as it is, and the day to day interactions, are trite and polite. It's a struggle to be drawn into the drama which, like Chekhov, may be a comedy. There are references to plays the characters are off to see, one of which is "The Cherry Orchard." But they can't quite recall if it is Ibsen or Chekhov which they regard as more or less the same. Everything is a muddle as they just "carry on."

There is that British/ WASP notion, echoed by the production of "Children" by A.R. Gurney which launched the season, to avoid conflict and repress emotions. At all cost avoid talking about feelings and real issues. Instead have tea or martinis. Pull back and gloss over conflict. It is interesting that WTF has opted to create an arc beginning and ending the season with comedies of manners.

The matter of avoidance of the obvious is focused around the character of the dithering, milquetoast, incompetent teacher St. John Quartermaine. His name is pronounced Sinjon. The role is superbly performed by the remarkable Jefferson Mays. A few years ago I was fortunate to see him in the one man/ woman, Tony Award winning "I Am My Own Wife." He is a delicate and fragile man who is played here not as homosexual but as androgynous. His character is a well dressed, natty, shell of a human being. He is the empty vessel that the other characters fill, use, and exploit to fit their needs and desires. The "bachelor" is ever at their command to baby sit, fill a chair at a dinner party, give an opinion, or carry on an inane conversation.

Everyone knows he is incompetent but Sinjon is part of the family presided over by Eddie Loomis (John Horton), one half of the homosexual couple that runs the school. His partner Tommy is an off stage character. Of which there are quite a few in essence doubling the cast of characters and extending the action beyond the confines of the stage.

Seated in his lounge chair in the 'Staff Room" Sinjon is the epicenter around which the other characters revolve. They come and go with the platitudes of colleagues who, by the mere fact of mutual employment, congeal into an ersatz family. There are those endless greetings that start and end days, weekends, and terms. The half hearted conversations when we pretend that we care about the lives, passions, and dilemmas of our peers. We interact with each other because it is the polite thing to do. It's part of the politics of the work place to pretend to get along while holding onto our jobs. We have all had those inane conversations with peers we can't stand, have nothing in common with, and don't give a fig about. It is the farce that charges many a TV sitcom from "The Office" to "30 Rock."

Just who are these characters, and like our boring colleagues, why should we pretend to care about them? Perhaps one might relate to Mark (Stephen Kunken) who is struggling through the final draft of his now 3,000 plus page first novel. Understandably, his wife has left him and taken the kid. In this genteel environment, however, Kunken plays him way too large and boisterous to be convincing. He has not a shred of a British accent, true for most of the cast, and seems way too American for the role.

Anita's (Morgan Hallett) husband is cheating on her. Nigel, who we never meet, is running a literary magazine which is his excuse for being away on trysts. During the course of the evening we see her in and out of pregnancy twice. The other woman, Melanie (Ann Dowd) hates the mother she cares for. Eventually she falls down the stairs and croaks. This is delivered, literally, as a throw away line. She could care less for the sympathy of her colleagues. In another scene, however, Melanie has a melt down telling the self absorbed twit Henry (Simon Jones) how she regrets not accepting his marriage proposal years prior. Henry is always taking vacations that nobody wants to hear about.

Much of the comic relief comes from the over the top pratfalls of the junior member of staff, at first a part timer, Derek (Jeremy Beck). In scene after scene he appears with a new set of bandages over wounds resulting from accidents. During his first day of classes he appears with ripped pants from falling off the bike. It seems that he was startled when coming upon a group of Japanese students.

Derek is trying hard to fit in and do a good job of teaching. He is barely getting by on a part timer's salary. It fills him with resentment that Sinjon is so obviously ineffective. Henry, who has a funny speech about how Americans make a fetish of learning names, keeps calling Derek "Dennis."

Yes, we had a few laughs. Particularly in the faster paced second act when we came to better understand the players. This is a play that is admired by critics. There are those we chatted with who were quite delighted. Particularly, a Scottish woman who discussed how Americans miss a lot of the references and humor. There are those who are excited that Maria Aitken was given the chance to direct one of her favorite plays. It is wonderful to experience the exquisite performance of Jefferson Mays. But. Oh those Brits. Tough darts. Cheers.