And No More Shall We Part by Tom Halloway

Ending Life Drama with Molina and Kaczmarek at WTF 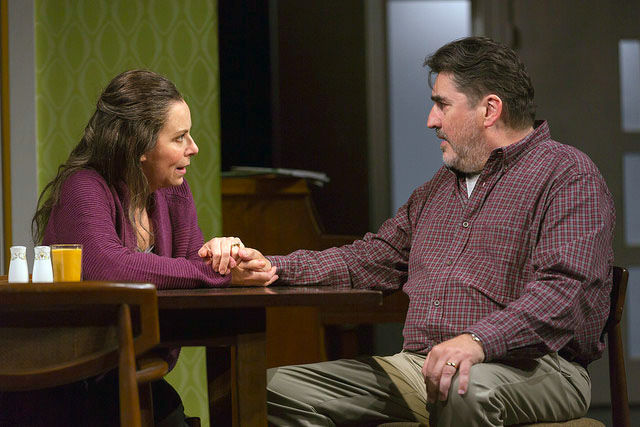 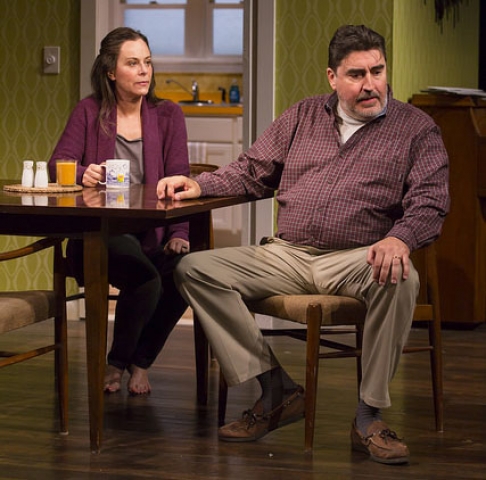 For the final production on Nikos Stage the stark and harrowing And No More Shall We Part is being given a riveting production by Williamstown Theatre Festival.

The Nikos program, significantly, has been book-ended with gut-wrenching dramas The Cost of Living, one of the strongest unique works of the Berkshire theatre season, and now closing with an equally challenging, tough-to-take drama.

On a generic minimalist, modular set, signifying the every-man home of an aging couple, by Rachel Hauck, the drama commences in media res.

We face the bedroom with Jane Kaczmarek (Pam) reclining and thrust out at us.  At a right angle, in profile, her husband Alfred Molina (Don) sits next to her.

In a seemingly inane, nostalgic dialogue that unfolds slowly with little or no movement, they recall family adventures of camping with their children. He remembers the events less precisely and when pressed appears to be distracted.

She is asking him to tell stories and highlights of their marriage. Slowly he asks if she is feeling anything yet. With shock and anguish we learn that she has taken a deadly dose of pills that have been illegally prescribed.

From the midst, or peak of events, with a shift in the set the action flashes back to the unobtrusive, functional dining room and its adjoining kitchen with swinging door. There is a hall to a living area with an unimpressive studio piano which she sits at but does not play.

There are intervals of period pop songs and they chime in totally off key. It is a signifier of how key moments of our lives, particularly when we are young, are represented by relating to pop tunes.

In the back story, leading up to the difficult to watch death scene, we come to know how and why Pam has opted to terminate her life.

One scene depicts her return from an appointment with oncologists. He is anxious to hear the news and makes her a cup of tea.  They take us through a complex and masterful range of responses when she informs him of the decision to end treatment.

There is remarkable synergy between the celebrated, award winning actors. Apparently, they have done a lot of work together and this coming season will appear in Long Day’s Journey Into Night at Mark Taper Forum.

She spells out for him what they have discussed in the past.

The next phase of her disease will entail excruciating pain, suffering and expense. That prospect is too much for her and she seeks to end it with some sense of control and dignity.

Surely every audience member was moved to recall the long, terrible illness of loved ones and friends. The play strongly evoked issues surrounding our right to die on our own terms.

Through an unfolding of options, and the range of emotional responses including his frustration and explosive anger, the audience was rapt and rigid in their seats.

Given that theater audiences mostly comprise of seniors we identified with the endgame that faces all of us.

It evokes marital vows, uttered by the young, to remain fathful "Through sickness and health till death do us part."

In an interview it was revealed that Molina, 63, for the past several years has been dealing with the advanced Alzheimer’s of his wife of 30 years, Jill Gascoine. After an attempt to deal with her at home she is now in a long term care facility.

One may imagine the degree of difficulty for the actor to perform in a role that so deeply and painfully reflects his personal life.

Yet again it raised questions of where an actor goes to find and portray a character? More importantly, having probed so deeply, what is the collateral damage when the play ends its run? What of the genie can not be put back into the bottle? How can one equate the balance between performance and sacrifice?

Kaczmarek and Molina delivered brave, heroic performances which were a gift to the audience. Their emotional depth and interactive charisma was meticulously evoked by the superb direction of Anne Kauffman.

She was refined in calibrating the difference between pathos and bathos. More than most plays its success relies on fine tuning and disciplined performers. She and the actors were masterful in maintaining an empathetic, plausible edge.

With curious synchronicity during the performance we heard thunder through the walls of the theatre. Patrons clustered in the lobby waiting for the worst of a ferocious storm to pass.

Not inclined for a sleepover at WTF I bolted for the car. With lightning crashing all around us, and a downed tree in the road on the final lap to our house, there were charged thoughts and discussions of our fragile mortality.

Over morning coffee we talked about how we would respond to the end of life decisions of Pam and Don. It was an issues play that raised so many complex and unanswerable questions.

That is the kind of rich and complex theatre experience that lingers with us long after the final curtain.