A Hotbed of Cutting Edge Music 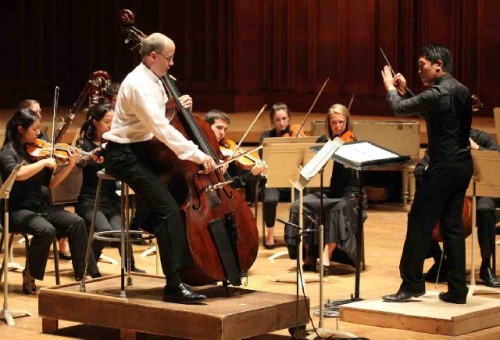 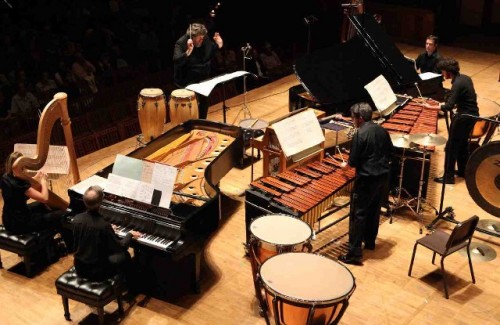 Oliver Knussen, one of the directors of the Festival of Contemporary Music captured the evening’s spirit by taking advantage of the improvisatory Maderna composition which gave permission for him to fly. He did. And so did the orchestra.

This was the inaugural evening of Tanglewood's annual Festival for Contemporary Music, always billed as a 'hotbed' for music and performance. This evening showed why the title is deserved. Composers ranged across the twentieth century, some inspired the Second Vienna School, others by jazz innovatio0ns.  All honot Bachian classicism and the pure pleasure music provides.

Osawa Hall, encased in a warm wood, with lattice-like design trimming the balconies, boxes and railings, feels like an intimate cathedral in honor of music itself. This may be the underbelly of Tanglewood, but it may also be its heart.

George Perle talked often about reaching an audience, although he hated critics' discussion of 'accessibility.'  As William McNally played solo piano in his Concertino, with Cristian Macelaru conducting, it was easy to see how Perle succeeded. While he used all twelve tones of the scale equally to create a fuller palette, he was not bound to arbitrary laws governing such items as the repetition of any note. These laws can deaden the effect.

Instead Perle works in 'atonal tonality,' to provide ear-catching moments of wit and beauty. Pianist McNally has a gift for interplay with other instruments, in dialogue and cross-talk. He scampers across the keyboard, but takes time to relish hints of romanticism. As he performed, you could see why Perle made the argument that the full 12 tone scale reflected the harmonics of the universe. The evening memorably began with this thoroughly engaging piece.

Edwin Barker is a magnificent bass player, and Antoniou, who wrote the Concertino for Contrabass for him, called him 'a wonderful musician and a unique virtuoso.' As Barker played on a podium next to the conductor, Keitaro Harada, who took brisk command of the proceedings, you felt for a moment that you were in a dark, smoke-filled basement, listening to a dude swing. Swing and pluck Barker did, and the impish use of the upper registers on the bass reminded one more of Segovia than a double bass performer. No percussions are used. Antoniou also notes that this piece premiered on his mentor Schuller's 75th birthday, and was composed in part to honor him.

This prepared us for Schuller, who Oliver Knussen took on. If 20th century music dips back as far as the 15th century for its counterpuntal and rhythmic ideas, it also often embraces the music emerging from contemporaneous pop culture. Schuller of course not only incorporates jazz into his work, but is also a jazz composer. Rhythm is critical to contemporary music, where someone like Schuller veers far away from the traditional emphasis on the first beat of a 4/4 measure. Knussen pulled forth the beat in Tre Invenzioni with an impish joy.

After intermission, Knussen returned to both conduct and perform in Bruno Maderna's Il giardino religioso. The Schuller and this Maderna piece both premiered at Tanglewood 28 years ago. The chamber orchestra is placed unusually: the strings on a raised platform stage right, pianos front and center, two harps down right and left.

Whether or not the initial stop and start was part of the composition, or a reaction to someone in the audience talking, is impossible to determine. Listening to Il giardino religioso conducted earlier by Schuller, none of Knussen's 'business' was evident.

I concluded that either Knussen was starting right at the top to play with the audience, his clear prerogative in Il giardino religioso. Or that he had left a hammer he needed to use later when he joined the orchestra to perform on various instruments including a triangle, the piano lid and drums. Or that someone talking out loud in the audience had irritated him and he decided to start over. Open form. Add the unusual conducting gesture of holding up four fingers which meant...?

Schuller called Maderna's music 'aleatory' or chance music. It is also improvisatory.  Often quiet and mystical, the piece crescendos to an intense climax in which the conductor participates.

The instruments pass tone along from one performer to another. Clusters of sound are sometimes jerky and bumpy and at others smooth as silk. Jagged rumbles go back and forth. This delicious piece disappears in the double bass.

Knussen moved quickly around the stage to play his parts. No surface was left unturned. However, Knussen did not plop his butt down on the piano, which Hindemith had once composed.

Back to beginning at the end with an early Hindemith, Kammermusik No. 2 for piano and ensemble. Like the Perle that began the program, we hear Hindemith using atonality with a tonal cast. Often the decorations written for the piano part provide arrhythmic and also melodic tones. With Alexander Prior now conducting, Nolan Pearson performed at the piano with an acute sensitivity to the possibilities provided by the composer in 32nd notes mixed with 16ths, and delightful ornamentation in the slow section.

Hindemith wrote at the time he composed this piece that atavism had him in its grips and that he had to work hard to put the past aside. You would not have guessed it in this evening's performance. Instead, his piece and the rest of the program reflected the remarks he made in a letter to Emmy Roonefeldt, a confidant. He remarked on a new zest being brought to musical life. His biggest achievement, he notes, is the creation of a musical community. On view in Osawa Hall are both the zest and the community which have continued to this day.

The Festival continues through Monday at Osawa Hall, Tanglewood. There are performances on Sunday at 10am and 8pm and Monday at 8. Recommended highly as provocative and fun.