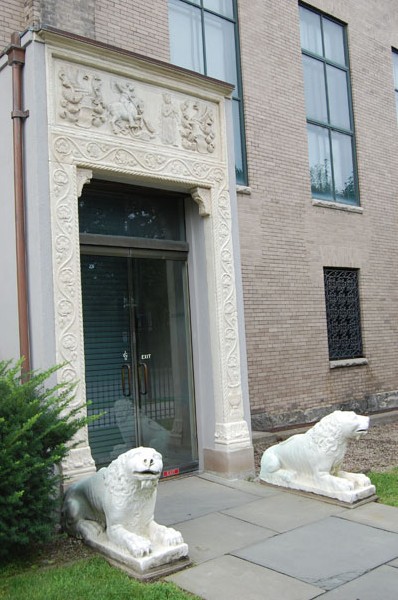 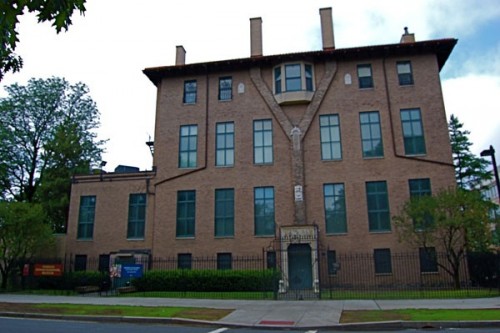 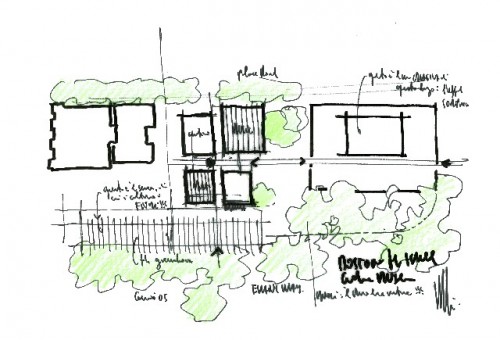 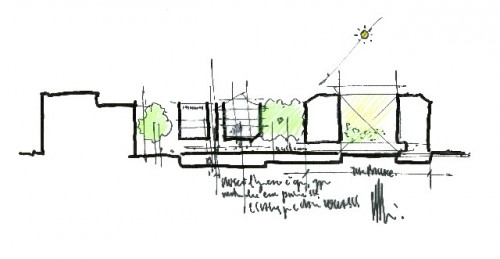 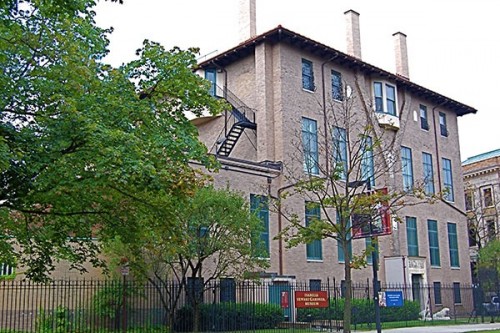 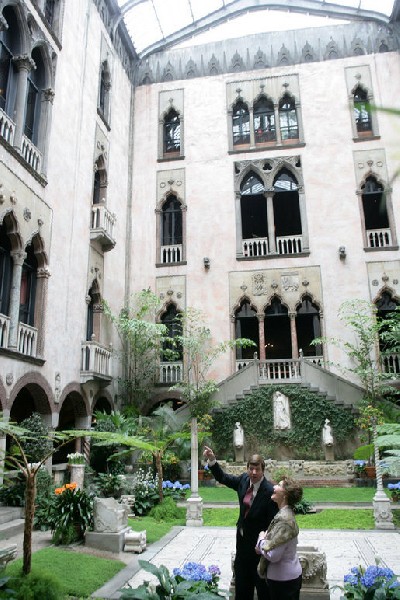 Modeled on a 15th-century Venetian palazzo, centered around a light-filled interior courtyard garden and incorporating a collection of over 2,500 works, Boston's Isabella Stewart Gardner Museum or Fenway Court is a rather unique institution. The Gardner's outstanding collection is made up of European, Asian and American art and includes paintings, sculpture, manuscripts, tapestries, jewelry and decorative arts. The museum hosts exhibitions of historic and contemporary art. Rich in Italian Renaissance paintings and in 19th-century works by John Singer Sargeant and James McNeill Whistler, the first Matisse in an American collection is also housed there.

A wealthy socialite and patron of the arts, Isabella Stewart Gardner (1840-1924), hired architect Willard T. Sears in 1896 to design the mansion based upon a Venetian Renaissance palazzo. It was built out of new materials but incorporated architectural fragments from European Gothic and Renaissance structures. The antique elements were worked into the design of the turn-of-the-century building to appear seamless. Custom tiles were designed for the Palace's floors, concrete was used for structural elements, and antique capitals were affixed to columns. Covered by a glass roof with a steel support structure original to the building, the interior garden courtyard is a spectacular space, more European than North American. A common misconception is that the Gardner was brought from Italy in pieces and reconstructed in Boston. This is just not true.

Much admired for the intimate atmosphere in which works of art are displayed and its airy and fragrant flower-filled courtyard, most of the art pieces are unlabeled. The generally dim lighting is more like a private house than an art museum. There is a performance hall with a piano and seating where concerts are held on most Sundays from September through May.

Mrs. Gardner began collecting seriously after she received a large inheritance from her father in 1891. Her purchase of Vermeer's The Concert in Paris in 1892 was her first major acquisition. In 1894, the noted Harvard-trained Renaissance art historian, Bernard Berenson (1865-1959), assisted her to acquire a Botticelli. Following this, Berenson helped Gardner to acquire nearly 70 works of art for her collection. Contemporaries of her class and wealth considered Mrs. Gardner a bit flamboyant, a bohemian and a cultural rebel. And these were her close friends and family. The Art of Scandal: The Life and Times of Isabella Stewart Gardner, a book by architectural historian Douglass Shand-Tucci, well documents this.

Henry James fictionalized her and John Singer Sargeant painted her. Isabella Stewart Gardner was certainly more than a rich socialite who fell into friendships with the leading cultural figures of her day. Mr. Shand-Tucci presents that she was a cultural and social pioneer. She was also prone to extreme fits of emotion, sometimes very stubborn and often egotistical. But, she had a certain genius. Her famous museum in Fenway Court very early recognized and enshrined Asian art as well as that of the old masters. And she was certainly a social rebel for her status and times who befriended free-thinking intellectuals, artists, academics, Jews, homosexuals, and other outcasts from Victorian and Edwardian society.

A fascinating sidebar to this high art and high society is the Gardner's place in the history of art as the site of perhaps the greatest art theft in the world. On the morning of March 18, 1990, two thieves disguised as police officers broke into the museum and stole thirteen works of art. These included a rare painting by Vemeer (The Concert) and three Rembrandts (two paintings, including his only seascape The Storm on the Sea of Galilee), as well as a small Rembrandt self-portrait print and works by Degas, Manet and Flinck along with French and  Chinese artifacts. The case remains unsolved. The museum eccentrically still displays the paintings' empty frames in their original locations. Apparently, this is due to the strict provisions of Gardner's will which instructed that the collection be maintained absolutely unchanged. However, it does seem unfortunately changed.

There are many theories about the theft as to who masterminded it, who did it and where the art works went. Perhaps, one day an article will be written in Berkshirefinearts.com about this, but not here and not now. Hopefully, sometime in the near future, the case will be solved and the art returned to the Gardner Museum. Many quality books and at least one exciting movie should come out of this.

Isabella Stewart Gardner stipulated in her will that the collection remain in the state it was in upon her death in 1924. Even with everything arranged according to her strong wishes, the museum has organized temporary exhibitions periodically. In November 2004, the museum announced that their temporary exhibition program would grow. In order to do this, the Gardner board elected to construct a new building.  This structure would accommodate growth outside of the original Gardner collection. Pritzker Prize-winning Renzo Piano's firm was chosen as architect. Piano is also working on Harvard University's Fogg Museum across the Charles River in Cambridge. The new Gardner building will triple temporary exhibition space, create new office and cafe spaces, and relocate the museum's main entrance. Completion is set for 2010.

This past April, the Boston Landmarks Commission approved Isabella Stewart Gardner Museum's proposed new building project and conceptual designs. The Commission voted to support the project and to initiate an accelerated design review process while the museum and the city work toward a final design. Previously, the project was shown support by Boston's leading preservation, historical, and regulatory authorities. These included the Massachusetts Historical Commission (MHC), Boston Redevelopment Authority (BRA), and the Boston Preservation Alliance (BPA).

Designed by the Renzo Piano Building Workshop, the new Gardner Museum building will be a respectful visual and structural counter point to Isabella Gardner's architect's original design. The Gardner Museum administration feels that this project is essential to the museum's long-term restoration and preservation goals. This will strategically ensure that Isabella Gardner's historic museum and vibrant legacy remain as its founder said, "for the education and enjoyment of the public forever."

After years of thoughtful option weighing and planning, the museum came to the conclusion that the removal of the original carriage house was necessary to balance the museum's critical needs. Isabella Gardner's will allowed for changes to the exterior spaces behind the museum. The carriage house was never part of the visitor experience and therefore is considered not part of Mrs. Gardner's architectural legacy that must be maintained as it was in 1924.

The project and the proposed design were approved by the Boston Civic Design Commission (BCDC) and now have the full support of community and institutional neighbors in the Fenway neighborhood. Regulatory approvals for the new building project began during the fall of 2006. However, all of this did not come about without a bit of initial controversy. A few vocal traditionalists berated the Gardner's rejection of the past while others claimed that the museum's footprint did not warrant the additional expansion. The project is going ahead in spite of the earlier protests. The fors outweigh the againsts.

The location of the new Gardner building is on a lot behind and adjacent to the Palace. The new building will stand no taller than the roofline of the existing museum and is designed in a way that respects and complements the Palace and the neighborhood. Like Mrs. Gardner's original, it is the desire of the Gardner board and administration that the new museum addition will be a work of art itself and therefore, an important cultural and architectural landmark for the City of Boston.

A new museum entrance will be in the new building and oriented toward nearby Evans Way Park. This will allow for easier visitor pick-up and drop-offs and improved security for the museum generally. There will be single-story glass corridor between the buildings and through the south garden. Isabella Gardner choreographed her visitors' entrance from busy thoroughfare to tranquil passage to brightly lit courtyard into the museum. This experience will be preserved and improved in the new plan.

The expansion's major construction materials will be low-iron glass, steel, brick, and exterior metal panels.  A Green building, the expansion will be LEED Certified. The Gardner Museum will be applying for Gold LEED certification and will feature a geothermal well system. All rainwater will be recycled for use in the greenhouse.  The greenhouse itself will be 2,500 sq. ft.

The total area of the new building's interior is to be 60,000 sq. ft. The enlarged Performance Hall will include 300 seats while the Tapestry Room accommodates 260 with three balconies, 64 people/balcony. All are front row seats. There will be 96 people at stage level. The new design will include a renovation of the Tapestry Room that will return it to its original orientation. Last year, over 10,000 people attended concerts at the Gardner.

There will be a special exhibition gallery that will allow for expanded shows and special installation. It will be 1,500 sq. ft. This gallery will be over three times the size of the  current special exhibit space. The maximum capacity of the historic Palace is 200,000 visitors per year before and following expansion.

Renzo Piano is very busy between Harvard's Fogg Art Museum and the Gardner Museum. His firm will be making major impacts upon two great museum's, Boston, the New England region and even the cultural life of America. This is a tremendous creative responsibility. Architect Renzo Piano is up to the task. Remember, Piano is one of the architects of the Centre Georges Pompidou in Paris (1977), the New York Times Building (2008) and the Morgan Library expansion (2003-2006).

Great architecture needs to be fostered by great institutions. At the Isabella Stewart Gardner Museum there is a renaissance going on at the Renaissance Palazzo. Luckily, with all of the museum expansion and renovation going on in the next few years, this is true throughout the Commonwealth of Massachusetts.