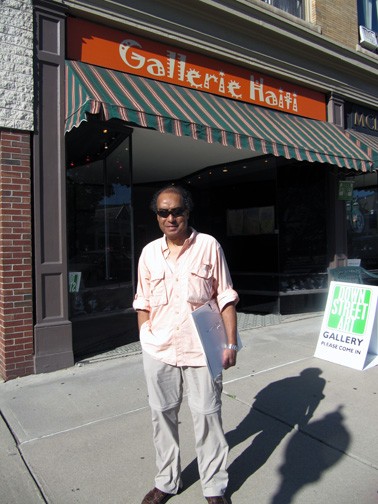 On Main Street in North Adams in front of Gallerie Haiti. Giuliano photos. 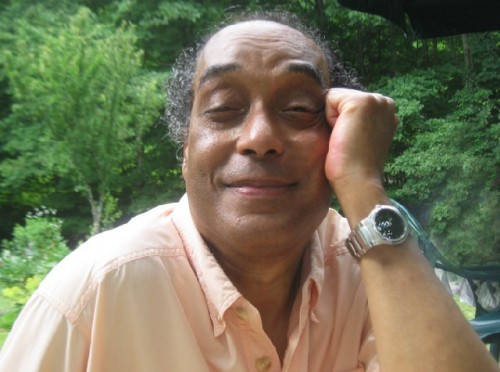 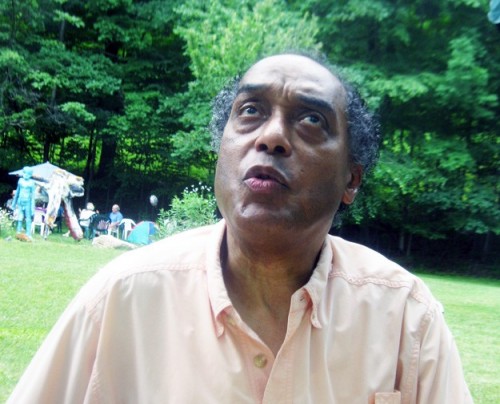 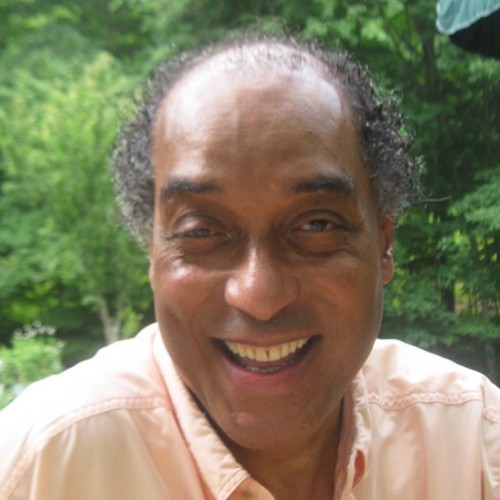 Working through abstraction back to social issues.

My relationship with art is a complicated one. The calculus of this relationship is based on a screwy equation: 80% intellect … 20% obsession … 10% other. The irregularity is clear. I call it the ten percent complication, and it goes like this: I think, I obsess, then I think some more … and bang! The mind explodes; and I watch, and I muse and I scheme while the mental debris collides, and falls onto coherent visual constructs … the site of my new works, a series I titled: MIND EXPLOSIVE DEVICES (or M.E.Ds). My new picture plane manifests a graphic enterprise using computer assisted imageries simulating all the iconic styles and techniques of western fine art—high and low—to bear witness to the elements of First World hubris directed toward Other Worlds. The mind explosion illustrated in the M.E.Ds, is not intended for the viewer. Instead, it is for the viewer to speculate on the aggressive modalities of rebranding the visual status quo … and to the truly discerning eye wishing for a mind-blowing experience: ENGAGE & PLAY!

Whether it is an intellectual endeavor or not, contemporary art has an underlying philosophical and technical sense that propounds the “artwork” in  the larger cultural system of media and structured cultural practices, high, middle and low. Recently, I’ve been tracking a course toward a contemporary process of art with techniques and ideas that—although widespread—are markedly different or in advance of those generally used in other works.  My own philosophical sense and the technique I use in making sense of my art come as a graphic interpretation of what is a “pure image”.

What exactly is the “pure image”? More accurately, what is it not? For starters, it does not include the physicality of painting with the markings and the brush strokes on a surface; nor does it possess the immediacy of photography, as a radiated, chemical, or digital facsimile of the world. I regard both medium as static orthodoxies to be challenged—or even prosecute any prospect of a return to the status quo ante. Therefore, the “pure image” is a forward-looking idea, which is both a state and a construct of the mind. It comes to me through a negative sense, as I envision a narrative of life and art that is no longer occurring in real time, but rather as a manifesto, that has already run its course through different types of media. The “pure image” is not a direct representation of reality, but the graphic re-working of a simulated abstraction of the real—without origin or reality—perceived through negative imagination and techniques. In the purest form, it is a fourth order simulacrum of regurgitated simulacra … simulation is simulated—isn’t that a hoot!

1- A professional career in broadcast media showed me the importance of having a work of art engage the public sphere. This socially engaged art needs to be anchored in an aesthetic process that envisions (or thinks) contradictions. It requires divergent and convergent thinking to generate unique social situations combined to fuse reality with carefully calculated artifice. This kind of work must be viewed as particularly authored—in the tradition or manner of a passive-aggressive behavior—by an artist who acts on gut desires rather than lofty moral contexts. My authorial instinct has always been to seek out the convincing angle (bias) for a visual possibility.

I adopted this stratagem (or concept) of art following a careful reading of Understanding Media: The Extensions of man — Marshal McLuhan … and a complete immersion in Manufacturing Consent: The Political Economy of the Mass Media — Edward S. Herman and Noam Chomsky

2 - As I began the switch form the medium of painting to a full digital (or computer assisted) medium, my interest in formal abstraction, and minimalism began to wane. Two important exhibits in New York City caused this change:

January 1991, Barbara Kruger solo show at the Mary Boone Gallery, when and where I learned that paint on canvas was no longer necessary; and the juxtaposition of imagery and text contain critical power … her work directed me toward Situationism--an artistic movement from late 1950s to early 1970s influenced by Dada, and Surrealism--to focus on the relationship between politics, ideology, art and social change … there I found the style and space to develop my M.E.Ds.

Summer of 1991, Ad Reinhardt retrospective at MOMA, New York City … throughout the 1980s I struggled to digest Reinhardt’s paintings … I studied every text he wrote, and I finally got it on my 12th visit to MOMA in July 1991 … the last gallery dedicated to the black-on-black paintings had a different sense, the temperature was near absolute zero … walking too quickly and you miss it … too slowly you get brain freeze … there I had my second art related epiphany -- Reinhardt was not a minimalist; he was a romantic; he showed that the unfathomable in art is not unfathomable … for me, painting came to an end … I went digital!

In my quixotic search for the pure image, I follow three rules:

The picture plane is a computer assisted digital drawing-painting process, and by that, I mean all of the images in the composition—excluding the text—are created in a single draw and paint application.

The process does not make use of scanned photos or images … it solely involves algorithmic sequences of curves (drawing) and colors (painting) that are layered and filtered through various lenses to create effects and/or compose images … I even use the style of the old masters, like:
SFUMATO--(colors blend softly into each other, rather than objects or shapes having sharp outlines or hard edges.)
CHIAROSCURO--(the balance of light and dark in a painting, with strong contrasts to create dramatic effect.)

The pictures are a media-based constructs that envisioned the real as a mediated form of abstraction … I do not create, I visualize situations as convincing possibilities.

It is the breeding ground for my brand of irony … as explained in the gallery text … juxtaposition has a significant presence in the visual lexicon of Haitian art … subject matter is often broken down into discrete pictorial components to ad layers and ambiguity in the discourse.