Mozart and Puccini Come to Life at HHOT 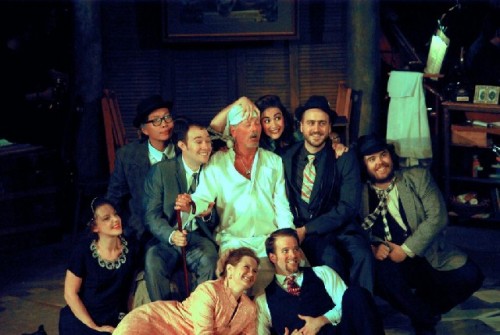 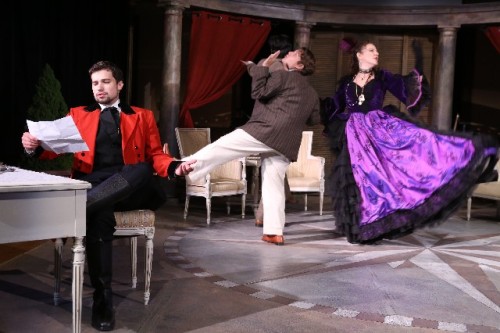 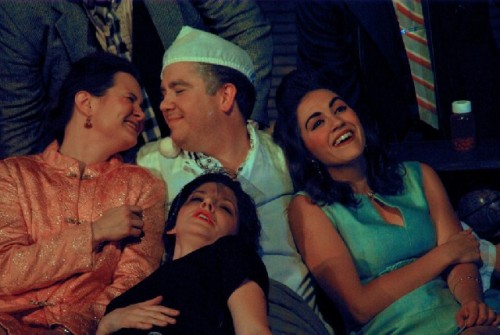 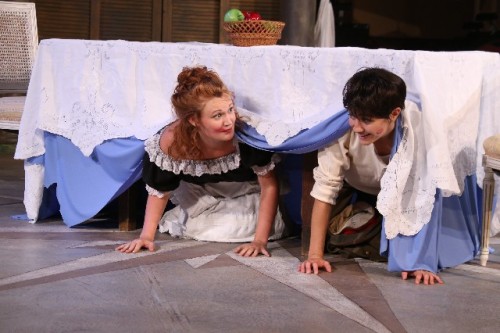 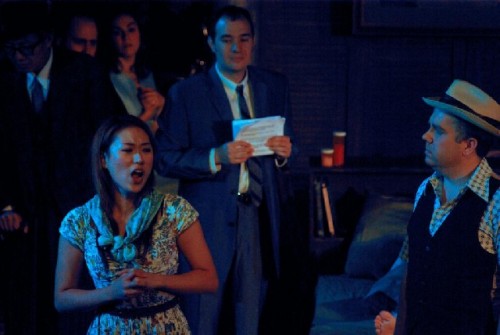 What energy!  What commitment!  What voices!

Hubbard Hall Opera Theater’s “Gianni Schicchi” is a little known gem that you absolutely must go to see.

I must admit that while I have a fairly well versed knowledge of opera, I had never seen this particular Puccini piece.  The comedy (which lives in the music) is broad and satirical and director Kirk Jackson’s staging compliments the composer’s intentions quite well.  He even added in a brief preamble featuring the soon-to-be-dead wealthy uncle, played, to great guffaws, by Philip Kerr, and the young and ever game ten year old nephew, played by James Moore, who ecstatically gets to search through Playboy magazines at his uncle’s request. Traditionally set in the 1200’s, Jackson updates this to the 1960’s, which makes for fun flashy costumes and props, such as a ribald portrait of the best mule in Tuscany, a modern chamber pot, a walker, pill bottles, a wheelchair and a rolling bed.

Comedy is hard, but these young singers nailed it and most especially the title character played by Andrew Adelesberger.  He has an impressive voice for a young baritone, but more impressive are his timing and instincts for comedy which can so often fall short on an operatic stage.  Bravo sir.

The three ladies of the family also provide a great energy and visual interest.  For Zita, the old matriarch, Sarah Nordin switches easily between a sharp tongued spinster and a conniving pseudo sexual black lace harpy all done with fabulous vocal color and surefooted rhythm.   Erin Nafzinger in pink and gold brocade and a tasteless fur crown, soars above the others with her effortless high pianissimo soprano during the lullaby, “goodnight baby boy”.  Jaime Korkos, with buffanted hair and purple eyeshadow, is a consummate actress with a fine ringing tone.  She comes to life most vividly when, with body language and whispering, she attempts to extract a promise from Schicchi to gift her the all-important mule, mills and mansion.

The lovers in this piece are comically matched as a slightly awkward and shy Rinuccio, played by Daniel Kamalic, and a beautiful Lauretta, Sooyeon Kang, who pulls her man with her around the stage.  It is ridiculous puppy love to the max with just a hint of caricature, which honestly suits the mood of the entire piece perfectly.  Both Kamalic and Kang have big, stunning voices that are well suited to Puccini and when Kang takes the stage with the popular “O mio babbino”, there were quite a few tears shed in the audience despite the fact that it is really a humorous moment about a father giving in to his little girl.

“Schicchi” played to capacity on the Thursday night final dress, and there is only one performance next weekend on Friday evening, August 22nd.  Book in advance because it would be a crime to miss this well done production.

Let’s get this out of the way: it is a long evening.

That said, if you asked for "Figaro", here, at HHOT, you get "Figaro" in all its glory, and it is well worth every minute of those three plus hours.  The orchestra is seamless, thanks to the expert guidance of Lidiya Yankovskaya.  When you can see her in action, you are impressed by the force of her leadership done with an all knowing smile on her face.  But for the most part, the orchestra is masked somewhat behind a lovely and versatile set a la Carl Sprague- at first spare room, then lady’s chamber, then dining room, and finally garden.  All of this is changed by footmen and chambermaids, creating a sort of sub-show unto itself.  In fact, the servants even earned applause after one of their changes, in part thanks to the antics of Nick Kilkenny as the drunk Antonio.

The voices are spectacular, starting with the Susanna: Marielle Murphy.  Her instrument is unstoppable and can be heard sparkling in every register.  She acts it well enough, although occasionally one can see her lose focus, but given that this is apparently her first time through this monster role on opening night, we can allow for some extenuating circumstances here.   Luke Scott, as Figaro, possesses a solid baritone that can carry over the orchestra with ease.  His Figaro is amicable and sweet, and while he wasn’t quite as lively as last year’s Figaro from “Barber of Seville”, he still does the role justice and is a pleasure to watch.

It helps immensely that the ensemble is comprised of extremely gifted actors, many of whom are double cast in the “Schicchi” production.  Jaime Korkos takes first prize for the evening.  Her Cherubino is realistic, touching and hilarious and when she is on stage she brings everyone else up to her fantastic energy level.  I give her even more credit because her role here is so very different from her appearance as La Ciesca in “Gianni Schicchi”.   Paul An and Sarah Nordin provide comic relief as Bartolo and Marcellina, out to foil the wedding plans of Figaro and Susanna.  Both of these young artists have the Metropolitan Opera credited in their bios, and truly their voices are well grounded and expressive.  Nordin, who bills herself as a mezzo (and indeed is, given her ease at tackling Zita in “Schicchi”), handled the high coloratura passages of Marcellina’s aria with agile fervor and seemingly endless breath support.   Blake Friedman, who plays the dandy Basilio, has a fine Italianate tenor and although his aria is usually cut, it was nice to be able to hear that voice shine in this production.  Geoffrey Penar, as a physically petit count, nevertheless fills the space with his smooth baritone and perhaps acts the role with more detail and intensity than anyone else on stage.  As Countess, Kristin Schwecke’s large voice calls the audience to attention, and even Jaely Chamberlain as Barbarina has a pitch perfect, compelling soprano and succeeded in stealing the spotlight with her saucy coquettishness every time.

In short, the ensemble here is stellar and the casting quite even throughout.  Kudos to director Patrick Hansen for creating such interesting and dynamic staging.  This is not a stand and sing concert production and it held my attention for the entire evening.  What a joy to be able to see such well-produced shows in my own private opera house for under $35.  “Corriam tutti” and go get your tickets- there is one weekend left!