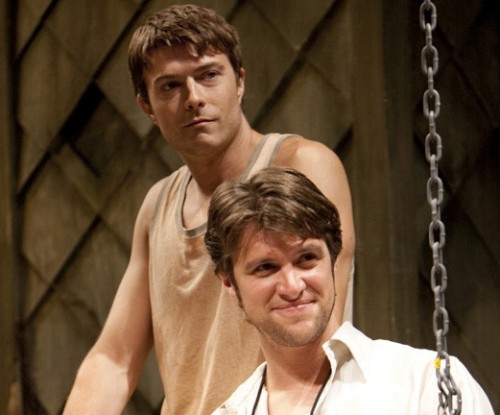 Ken (Shane McRae) has returned from Vietnam minus his legs and is cared for by Jed (Noah Bean). T. Charles Erickson photos. 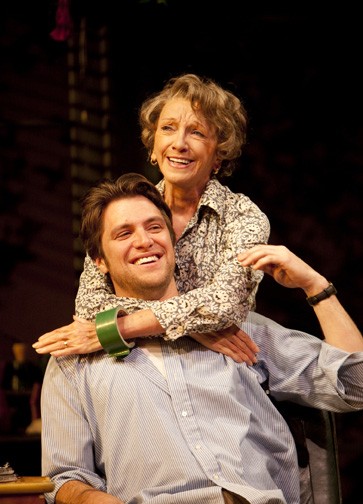 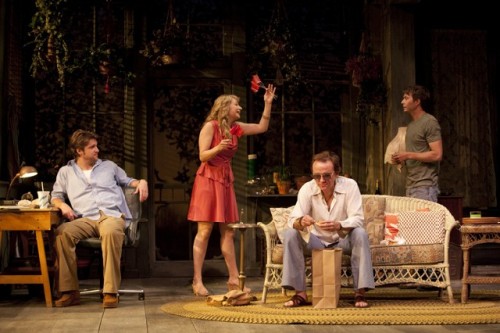 It took the longest time for Ken Talley, Jr. (Shane McRae) to get out of his chair in the sun porch/ family room of “a prosperous southern Missouri farmhouse built around 1860.” His lover Jed Jenkins (Noah Bean) hovered about attentively clearly craving attention.

There was a discussion of frequency of visits. Ken preferred St. Louis where his career in teaching has come to a roadblock. Jed likes to stay down on the farm which Ken has inherited. There is talk of Jed’s ambition to create a formal English garden. That will entail growing and trimming hedges over the coming decades and then creating a variety of herb and flower beds within the patterned ground plan.

There are other family members and friends gathering on the Holiday weekend. The ostensible reason and mandate is to at last put to rest the ashes of Aunt Sally’s (Elizabeth Franz) late husband. Part of the ironic humor is that the remains are contained in a candy box. But her insights and remarks are hardly sweet as honey. She has an edge and the wisdom of years that almost binds this dated centrifuge of a drama that staggers and explodes with unchecked histrionics over two, mostly enervating, acts.

When will Ken ever move we wondered as this was our first exposure to an apparently well know and historic drama. Eventually, Ken lurched out of the chair with the assistance of a pair of crutches. It seems he lost his legs in Vietnam. The plot largely revolves around that injury and the collateral damage not only to himself, but to Jed a tender and compellingly drawn lover, as well as an impact on Ken’s family.

Ken does not intend to return to the classroom. He can’t deal with the freaked out responses of students riveted on his prosthetic legs. Today, we would say he suffers from post traumatic stress. But despite the love and support of Jed and his family Ken has hit a wall. He lacks the strength and courage to break through it.

Part of his fantasy for the future involves an option to sell the house and move to Greece. The plan does not appear to include Jed or his landscaping.

This plot point is the fulcrum of the drama with its disorderly and often unbearable vectors through other mostly unattractive characters and their self absorbed preoccupations.

In 1978 it was apparently a big deal that Ken and Jed kissed on stage. It is also interesting to reflect on a closeted gay man in the military in an era before “don’t ask, don’t tell.” Reviving this play serves little useful purpose other than poking at those social scabs and their scar tissues. To a contemporary audience, having moved beyond those period issues, it is difficult to evoke the empathy that the play demands of us.

For most of the evening I wondered how and why I might care about this dysfunctional family. With the exception, noted by virtually every reviewer of this production, of the wonderfully firm, grounded, and under played performance of  Elizabeth Franz as Sally Friedman.

Compared to her low key and nuanced performance most of the other characters were over the top, loud, obnoxious and manic.

For that lack of balance and cohesion I mostly blame the direction of Terry Kinney. I hope and assume that the individual actors have more talent and craft than to scream at each other relentlessly and clamor for our attention.

Start with the 13-year-old, would be, drama queen Shirley Talley (Kally Duling). In a variety of outrageous costumes by Sarah J. Holden she upstages and overwhelms with unchecked sanguine energy every scene of which she is an aspect. She has mastered only one emotion so far. Full steam ahead. She may indeed have talent that will develop over time but in this instance the truism “Children should be seen and not heard” is oh so apt.

Shirley, who aspires to be the greatest star to emerge from Missouri since Betty Grable, is the out of wedlock daughter of her hippy mom June Talley (Kellie Overbey). It seems she slutted around at Berkley during the protest years. June shared a pad with her brother Ken and their pal John Landis (David Wilson Barnes). All three diddled each other. “Oh gross” is the response of the daughter Shirley who muses that she may just remain a virgin for the rest of her life.

John, who we learn was a switch hitter, has arrived with his loud and crude wife Gwen. Every time she is on stage, screeching and showing us more flesh than we want to, made me want to run and hide. Wake me when it’s over.

The disgusting, egotistical and boorish Gwen (Jennifer Mudge) is a copper heiress who wants to buy the farm from Ken and build a recording studio. She has delusional ambitions as a country music star. John who profits by managing her assets plays into that career path.

John and Gwen would also like to show Shirley a better upbringing. Since Gwen can’t manage her life the girl has been raised by the all knowing and wonderful Aunt Sally.

During those Berkley threesomes John believes he may have fathered Shirley. He is willing to take a paternity test and go to court to prove it. But we wonder if indeed the adolescent would be better off with this ersatz show biz step mom.

The stoner, singer songwriter friend of the Landis' Weston Hurley (Danny Deferrari) make the most of a character who adds some comic relief and little else to the plot. Far out man.

Just when things spin out of control at the end of the second act, sho’ nuf,’ Aunt Sally saves the day. Praise the Lord. She outbids the low balling John to buy the farm. Instead of heading to a retirement home she will spend her last days down home. With Jed. Who, like Candide, will tend to his garden. Ken who is now inspired to resume teaching will visit now and then from St. Louis. June, well I’m not sure what. Perhaps John and Gwen will take their sad act to Nashville.

As the curtain falls we are left with the notion of more gatherings on the Fifth of July. Perhaps minus John and Gwen.

This was indeed a superb production with truly wonderful sets by David Gallo. Both McRae and Bean were compelling as estranged lovers torn apart by Ken’s war wounds. A colleague insists that the play be viewed and respected for bringing sympathetic, non stereotyped gay characters to Broadway. Indeed some renowned actors have performed the roles. But is this a “gay play?”

Sorry, I didn’t see it that way. For me, Ken and Jed were simply characters who did or did not evoke compassion. Their issues were more focused on a relationship that circumstances have drained of passion leaving behind after shocks of affection. That is so familiar to many relationships on or off the stage. Perhaps that is why Lanford Wilson’s period piece is still produced.

But all that distracting clutter of other characters is difficult to sort out. In the blame game where lies the fault? Is it with Wilson or the direction of Kinney?

For me, what resonates on further reflection is how the drama evokes the terrible loss of life and consequent damage of the Vietnam War and how it impacted all of us. It is happening again, with Iraq and Afghanistan. And again, and again, and again. That’s the true tragedy of Fifth of July.