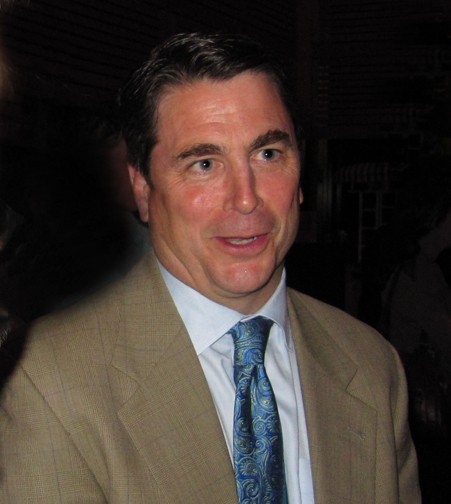 Joe Finnegan is winding down his first season as general manager of Willianstown Theatre Festival.

We asked Joe Finnegan, the General Manager of the Williamstown Theatre Festival for a comment on his first season which is now in its final phase.

"What a great summer it has been at the Williamstown Theater Festival" he said. "We opened the Mainstage with the rollicking all male version of A Funny Thing Happened on the Way to the Forum  that left audiences howling with laughter and coming back to see it two and three times and we are closing out the season with a sold out The Last Goodbye on the Nikos Stage. After the Revolution, received rave reviews and is on the way to Playwright's. It came out of our Fellowship program from last summer.  All season the buzz in the lobby and on Spring St has been phenomenal. Great energy all summer from  the apprentices, the interns  and the most Non-equity actors that we have had on stage in recent years. Nicholas Martin capping  his three year  stint as Artistic Director on a high note  with a very well received Our Town that had a cast of 39, including 14 locals- is passing a re-energized baton to our incoming Producer Jenny Gersten.  We are ecstatic to be having her returning to Williamstown and she can't wait to get started-

"In our interview last winter I gave you a quote from Chauncey Gardener: " There will be growth in the spring "

"Now I'll leave you with with a quote that every sports fan (I have been a NY Ranger fan most of my life) knows by heart:

"Wait Until Next Year !"

Thanks Joe we needed that.

Everybody knows but nobody wants to talk about how rough it was for WTF last year from aesthetic to financial. Like all arts organisations the festival struggled through adversity. In his second of three years as artistic director Nicholas Martin bravely continued following a stroke in the fall of 2008. In the program he assembled, particularly on the scaled back Nikos Stage, he was off his game.

Since then Finnegan has brought stability to the managament of the festival.

While he has a lifelong passion for theatre it has been, until now, in a non professional capacity.

Finnegan and his family moved to Williamstown in 2005, after he had worked in a number of capacities on Wall Street. A frequent guest commentator for CNBC, he spent several years as a New York Stock Exchange floor official and as an active mentor for NYSE education programs. He was a partner at CMJ Partners, a specialist for Wagner Scott Mercator, and Managing Director and Head of Corporate Development for Bear Wagner.  Finnegan is currently the President of the Williamstown Film Festival and serves on the boards of Pine Cobble School, Images Cinema and Williamstown Lacrosse.

Because of its contract with Williams College there is a narrow window of when the festival is present on campus. There have been no boots on the ground until  June. When the season winds down management shifts back to the office in New York. For that pragmatic reason WTF has lacked a year round presence in the arts community.

The promotion and marketing of the festival lags behind that of other theatres often by months. There is the truism of out of sight and out of mind.

As a Willimstown resident Finnegan has made a difference. In addition is the off season presence of Carolann Patterson in the area of promotion and marketing. They have initiated relationships with the local as well as national media. On opening nights they are always in the lobby interacting with visitors, board members, the audience and critics.

When there are glitches, as is the case with seasonal pr staff, they have been the go to contacts to address problems.

But they shun the spotlight or at least blink in the glare.

As the warm and accessible Finnegan has repeatedly told me "This is Nicky's season." He strove to see that nothing distracted from that. As well as to give Martin full administrative support. Behind the scenes Joe and Carolann have been a large part of the success of the season. Nicky gave them a superb program and they got the word out. Often with the comment of "What do you need and who do you want to talk to?" That has been remarkably different from past seasons.

Prior to Martin taking over for the past three seasons the venerable WTF had foundered. The stars have returned to Williamstown and clearly audiences have responded. Significantly, both to old chestnuts which proved to be hits on the Main Stage like Forum and Our Town, but also in the wild enthusiasm for new works on the smaller, more edgy Nikos Stage. Once again these premiere productions are going on to New York and Chicago. While nothing yet is a done deal there is great anticipation for the smash hit sold out rock musical The Last Goodbye.

As Martin passes leadership to the new artistic director, Jenny Gersten, he leaves WTF is better shape than he found it.

During the off season Finnegan assures us that Gersten will be a visible and available presence in the Berkshires. She has a history with WTF and is anxious to take it in a new direction. Of course she will work out of New York which is where programming, casting, and development occur. But she will also be working with Berkshire based audiences, board members, media and cultural resources.

In his perpetual motion between Williiamstown and New York Finnegan will connect the dots. It will go a long way to keeping WTF in our hearts and minds and not just as a summer thing.