The Game Is a Winner for Barrington Stage A simple but elegant and functional set for The Game by Michael Anania. Kevin Sprague production photos. 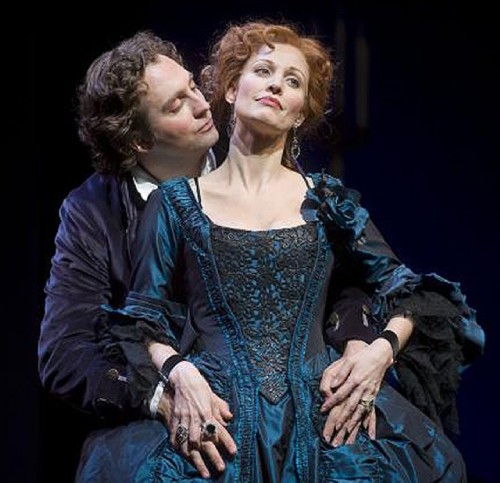 The decadent combatants engage in a dangerous game. 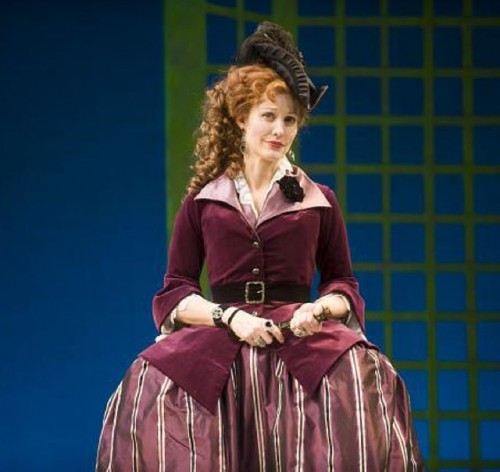 York as the elegant and evil Marquise de Merteuil. 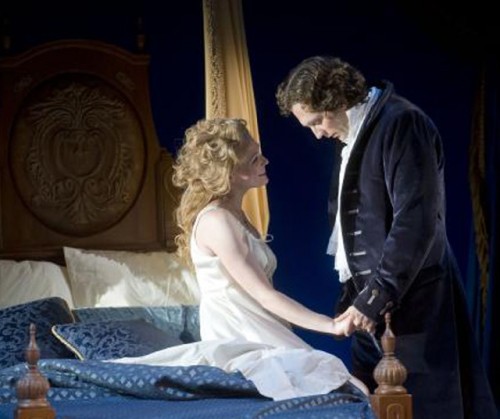 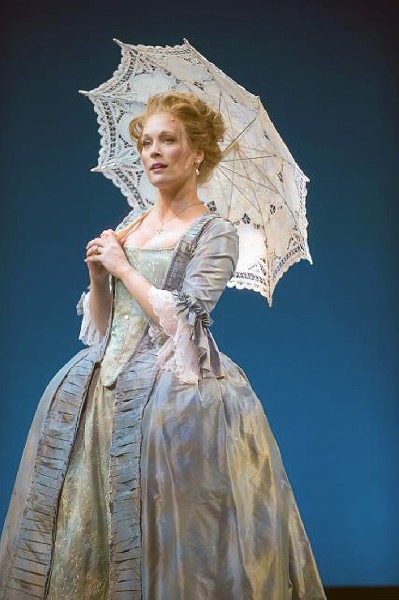 Decker in a gorgeous costume by Jennifer Moeller. 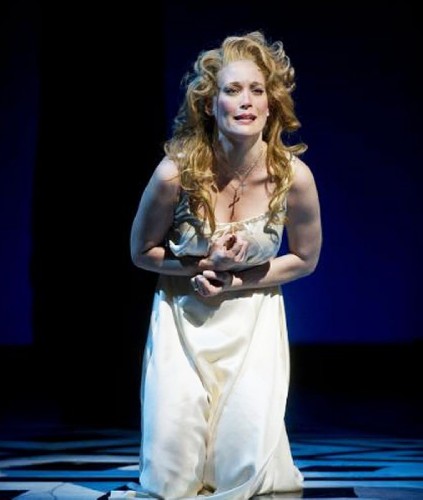 Madame de Tourvel is seduced and abandoned by Valmont. 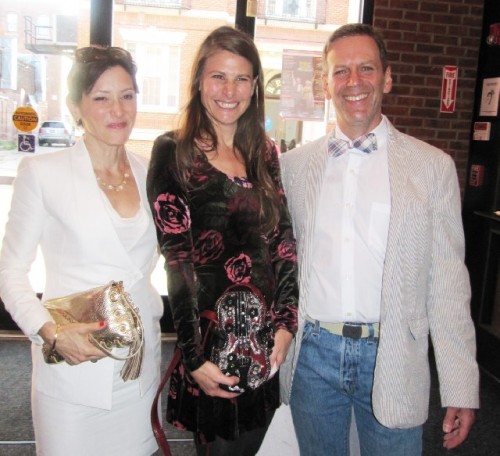 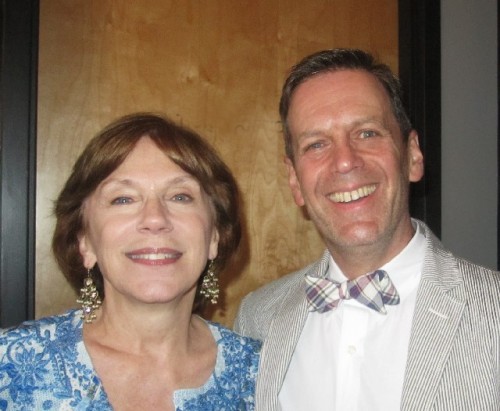 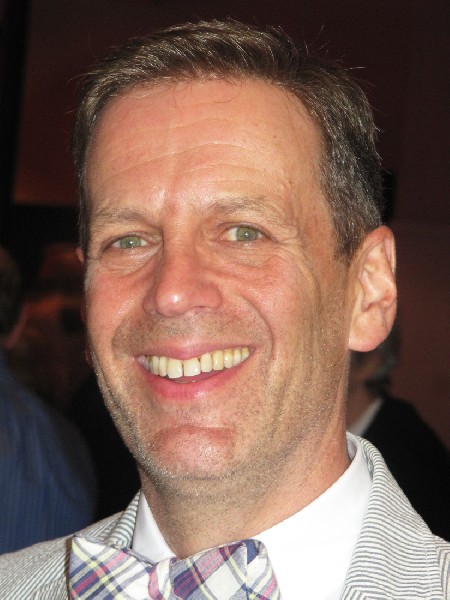 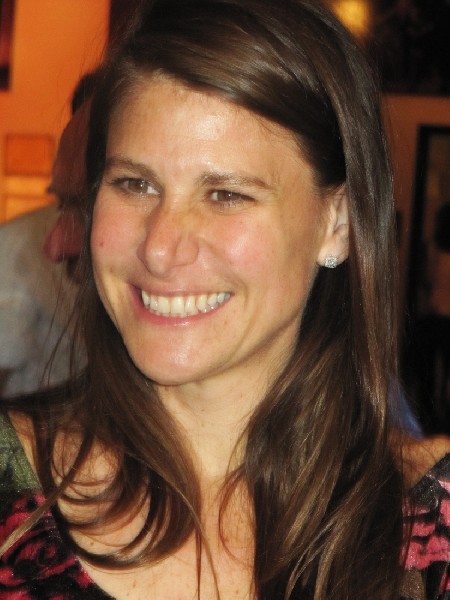 It's game on for The Game at Barrington Stage.

The third and final production of the summer season on the Main Stage of Barrington Stage Company, The Game, a bright and sumptuously presented musical by Amy Powers and David Topchik based on the 1872 French novel Les Liaisons Dangereuses by Choderlos de Laclos, is sure to be another hit.

The season opened with a Fourth of July cracker jack of a musical Guys and Dolls. It bookends with a revival of a home grown musical which Barrington Stage premiered, in its former home, in 2003. Sandwiched in between two musicals was a tough and gritty new drama by Mark St. Germain, an artist in residence for the company. The play The Best of Enemies about school integration and its racially charged issues holds the record for most tickets sold for a Main Stage drama. The compelling play returns to Barrington from October 5 to 16.

Julianne Boyd, the artistic director of Barrington Stage which was founded in 1995, is remarkable for providing Berkshire audiences with revivals of popular plays and musicals, but also including a program of new works.

In filling a mandate to provide the best new theatre The Game, which has been brilliantly produced and directed by Boyd,  is just knock down, drag out stunning.

There is a wash of pastel colors in gorgeous period costumes by Jennifer Moeller. This palette of silk and satin, with all those corseted, push up bosoms, has been softly accented by the lighting design of Jeff Croiter and Grant Yeager. The sparing set by Michael Anania, with a very precise use of props, is able to create the proper mood for thirteen scenes in act one and another ten in act two. It is a remarkable technical accomplishment particularly with a tight budget.

The music by Megan Cavallari evoked the French Rococo with lyrics by Powers and Topchik. As performed by a pit band of seven instruments led by music director, Darren Cohen, the twenty songs were so beautiful and intriguing that it would be wonderful to have them on a CD. In a different context and more exposure songs like “They’re Only Men” “The Game” “Certain Women” “Just Past Midnight” “My Sin” “Victory is Mine,” to mention but a few, might easily become cabaret favorites and jazz standards.

A caveat. For all of its charm and beauty this is a smarmy tale. The protagonists, the Marquise de Merteuil (Rachel York), and her lover/ combatant Vicomte de Valmont (Graham Rowat), are erotically scrumptious but amoral and utterly vile creatures. Only in Valmont do we find a hint of humanity and it proves to be his undoing.

For their decadent sport and amusement they wager on seducing and destroying the lives of others. If there is a moral tale to be told the evil consumes them just as their callous actions cause mayhem and disgrace for those who are caught up in their webs of intrigue. The Marquise is the essence of a merry widow spider. She is conveyed with wicked charm and evil intensity by the fabulous Ms. York. Her performance and prowess as a singer were remarkable to behold.

Of course the story, which scandalized French society when it was first published, and continues to intrigue audiences in its many incarnations on stage and screen, is a signifier for the looming French Revolution just seven years in the future. Taking a Jacobin position there is nothing to like or admire about these degenerate aristocrats and their blood sports. Even the nicest of these self absorbed characters, such as the temporary virgin and former convent girl Cecile (Sarah Stevens), her corruptible suitor Danceny (Chris Peluso), and Valmont’s endearing aunt Madame de Rosemonde (Joy Franz) have few if any redeeming social and humanistic qualities.

Off with their heads. While Madame LaFarge and her cronies knitted and packed lunch for the daily executions of the later Reign of Terror of the 1790s.

It is a wonder that we are so fascinated by such worthless creatures. The challenge is to separate outrage and revolutionary zeal from the escapist delightful of voyeuristic entertainment.

The art of the late 18th century is an acquired taste. In the scene of an evening of dining and entertainment in the home of the Marquise de Merteuil there is a large painting which references the light touch of a Fragonard or Boucher.

In addition to the paintings, decorative arts and furniture another means of entry into the Ancien Regime is through its letters. Many have survived and they represent an exquisite literature. There are many references to this in The Game. We first encounter the ingénue Cecile writing to her friend Sophie. There is a comic moment when Valmont, in a campaign to conquer the virtuous Madame de Tourvel (Amy Decker), composes a love letter while in bed with a mistress.  He uses her derriere as the “table” on which he writes the ingenuous love note.

For a careful observer there are insights to the elaborate courtly diversions of the period and its constraints on women. It is the great age of women as they had confining and limited roles but used them with devastating skill. They presided over the salons and in so doing ruled and manipulated the men who seemingly wielded all of the power.

Taken out of context Marquise de Merteuil may be regarded as a liberated woman. She married well, for title, social position and fortune to an older man who was considerate enough to die. That left her with wealth and freedom. With no husband to obey and be subservient to she is free to pursue her sexual pleasure. She is every much the equal of the libertine Valmont. They are sexual predators and masters of The Game.

It is telling when she comments to Valmont that a particularly difficult seduction will be the “triumph of your career.” How about that as a job description. His career, apparently respected and socially accepted, entails deflowering virgins like Cecile or fornicating with virtuous married women like Madame de Tourvel. The more challenging the quarry the greater the prize.

Which is what the Marquise, under the guise of big sister advice, conveys to Cecile the latest victim of Valmont. Now that the formerly chaste convent girl has been bedded by a master she wants, more, more, more. Oh my. In a delicious duet the Marquise conveys that “They’re Only Men.” True.

Overall the cast and singing were remarkable. Stevens, however, played Cecile more as a gushy, airhead valley girl than a rococo coquette and irresistible bon bon. Too often she was jumping up and down with a goody goody enthusiasm. Coy restraint and irony would better have conveyed the period and heightened the degree of accomplishment for Valmont.

During the ball in her honor her mother Madame de Volanges (Christianne Tisdale) chides Cecile about bowing to everyone including the servants. If only it were advice she took to heart. It was up to Boyd to bridle some of that over the top enthusiasm.

In its current state The Game is a gleaming and polished musical poised for prime time. It is surely a delight for Berkshire audiences. Mr. DeMille it’s ready for its close up.