A Provocative and Sexy Show at Bromfield Gallery 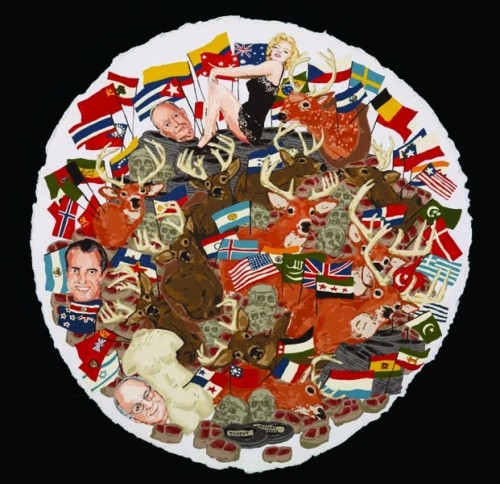 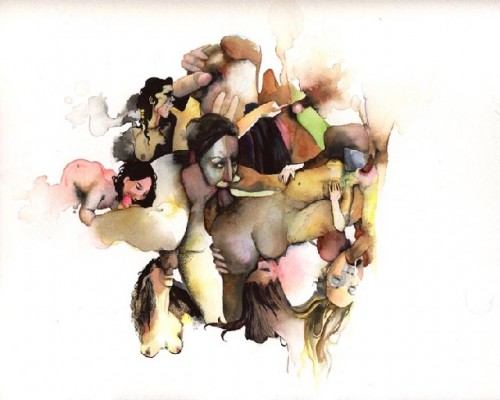 Summer shows, especially August shows, can be a bore. It's a clearinghouse time for galleries, one that leads to group shows of minor works or vague summery thematic shows about the beach or reading or (saints preserve us!) nautical themes. Bromfield Gallery, which as a cooperative is somewhat freed from commercial constraints, has had a different idea this summer. Turning over their space to guest curator Carol Anne Meehan and artists found through national competition, they've revitalized their summer theme by adding a dose of passion.

Physical passion, that is. The abstract works in this show ooze physicality, whether in the lush and saturated orange drips of Kate Beck's large oil "Naranga," or in the ghostly teeth that seem to be biting into electric currents in Leah Piepgras's moody washes of blue acrylic. Yoon Soo Lee's mixed media abstractions have the texture of skin, raised bumps which move across her painted surfaces in patterns that recall fractal geometry and lush floral decorative carvings.

While the abstract works are beautiful, it's the figurative and representational choices in the show that shock and viscerally engage the viewer. Kirstin Lamb's humorous gouache tondos are framed with elaborate old-fashioned carved gold. This quaint presentation fits the all-American images inside, which mix-up three very basic American things: sex, politics and fresh meat. "Trophy Flagpile" includes portraits of Nixon and Dick Cheney, amidst many references to guns and hunting, in a tangled morass that is topped, naturally, by a provocatively posing Marilyn Monroe. Lamb's ironic and faux-primitive application of gouache gives a crude sort of cartoonish cohesion to the midden of pop and politico culture detritus she assembles. Her works are full-color caricatures of our tacky and unfortunate national obsessions.

Speaking of which, one of the only taboo ones left is explored in lurid detail by Lauren Salk. Her small, deft paintings and drawings all have one theme: women offering oral sex to males, in images that must use as their sources either amateur or professional pornographic photography. What's fascinating about this obsessive theme (which she realizes in a dizzying variety of media) isn't just that it's taboo; it's that, though small, her works explore the sex acts in such abundance.

First there's a grid of tiny inks on paper, which each have a deadpan clarity. Then there's a different collection of versions done slightly larger, in oils. Here the muddy, blurred colors take on a pathetic, tawdry quality somehow lacking in the more clinical ink washes.

The oils and "galkyds" on canvas or even worse, in their turn, because they add texture to the tableaux of gyrating bodies, raising the penises and pubic mounds and mouths into low relief. The pen and inks, done in rigid illustrational pointillism, are even more provocative, making the cartoonish egg on tempera panels almost laughably innocent in comparison.