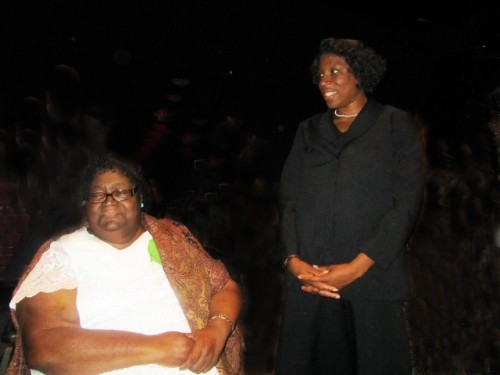 Activist Ann Atwater and Aisha Hinds who portrayed her. 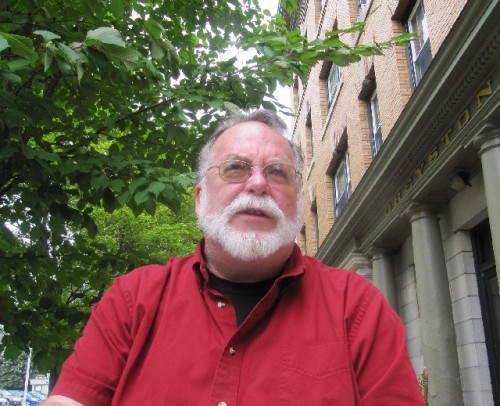 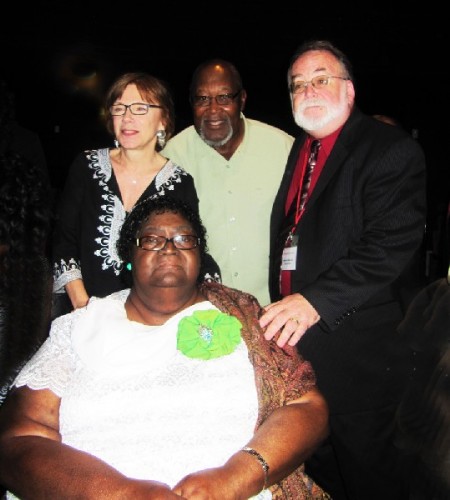 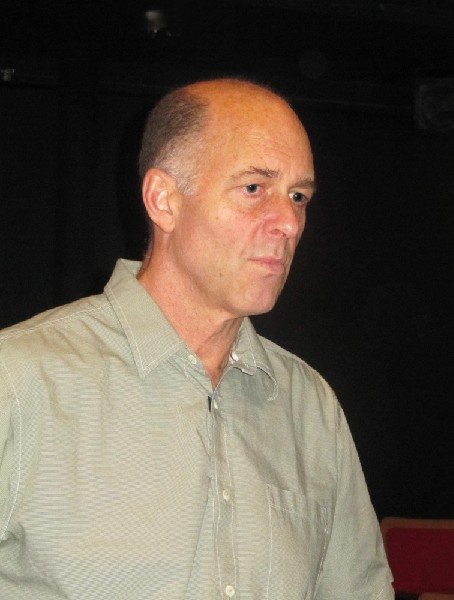 In this segment of an extended dialogue with the playwright he describes a unique relationship with Julianne Boyd, the artistic director of Barrington Stage Company. They have worked together on a number of plays including the hits Freud’s Last Session, which continues its run Off Broadway through October and The Best of Enemies which will return to Barrington Stage from October 5 to 16. It opened to rave reviews and sold out houses in August. From New York Freud travels to Chicago for an open ended engagement.

Mark St. Germain Anything I would do I would bring to Julie (Boyd, artistic director of Barrington Stage Company in Pittsfield, Mass.)

MSG It started way back with the first musical I did with Carolyn Rossi Copland. We did an adaptation of The Gifts of the Magi (music by Randy Courts, lyrics by St. Germain  and Courts)  and threw in the cop in the end from the O’Henry story. I was really green. The composer was really green and we had four weeks to write it. We thought “Oh that’s enough time.” Three years later we were still making revisions even though it was published. Then Carolyn knew Julie who was looking for a book writer for something she was doing. That’s how we all met.

CG What does the relationship with Barrington Stage mean to you?

MSG It means a lot. My position is Artistic Associate. That means getting involved and being a sounding board for Julie. With play selection and thoughts on different things.

CG So not just your own work.

MSG Yeah, the season. We know each other so well now that there’s a real short hand. There’s really no ego with Julie at all.

CG I hear the sentence but want to know what that means?

MSG She’s a real collaborator and that doesn’t always happen. I’ve been lucky lately with a bunch of plays that this happened. Too often someone wants to impose their ideas instead of sitting down, talking and figuring something out. If you say “Let’s try this” Julie will try it.

CG Having a relationship with a company how does that impact the creative process? She doesn’t have resident actors and designers but every artistic director has a rolodex of contacts and people to go to in developing projects. For The Best of Enemies, for example, John Bedford Lloyd ( the Klansman C.P. Ellis), is someone we have seen a number of times at Williamstown Theatre Festival. Were you aware of him from that context?

MSG I knew him personally. I knew his wife the actress Anne Twomey.

CG When you are writing a part do you have an actor in mind?

CG Are you involved with casting?

MSG It was really difficult (for The Best of Enemies). We had cast Aisha (Aisha Hinds as Ann Atwater) and we needed somebody with a huge amount of power who would be able to face her on stage. We went through casting session after casting session and nobody felt right. John came in and I never would have thought of him. He does so many movies that I never thought he would be interested. You talk about Williamstown. I didn’t know that.

MSG I knew that.

CG Lloyd is among those many gifted actors that we see over and over in minor roles in film and TV. They do not have the looks or charisma of leading men but they are ubiquitous. In this role Lloyd displays astonishing power. Might this be a breakout role and a game changer for him?

MSG Yes. For both of them John and Aisha.

CG She is more widely known.

MSG Yes. But she doesn’t often do theatre. She’s really good at whatever she does. I just hope she will do more theatre. I never would have thought of John for this role. In the movies he plays the detective or Secret Service agent. Mostly, somebody kind of white collar. When he came in and auditioned I was blown away. He was terrific and we knew that he was the guy. We were getting very close to deadline and were starting to get very nervous.

CG Where does Best of Enemies go from here?

MSG Like Freud nobody knows. (Later announced that it returns to Barrington for a second run in October.)

CG Have producers come and looked at it?

MSG Not many. August is a bad month.

CG It cuts back to the question of whether the success of Freud has put you on the radar screen?

MSG I don’t know. I really can’t think about that. With Freud there were people I talked to in NY producers and theatre companies. They said “Well, it was a success in the Berkshires but in NY a play about God and religion? Come on. You’re going to last maybe two weeks.” If I had listened to them we never would have had a show. It took about a year to put it together and get financing.

CG Were there any changes?

CG Is the contract for five years?

MSG Usually they’re for a year and renewable and renewable. Most likely for three years. If Freud was on Broadway it would be very unlikely, it’s in its second year now, it is very unlikely that it would have lasted for that time. So I really have to decide which way to go with it and then take it from there.

CG How important is it for regional companies like Barrington Stage to be bringing works to Broadway, like Spelling Bee, and Off Broadway like Freud. Does that give a company a national identity?

MSG It does and it’s a great bonus. But you said it yourself with Freud. How would you ever think that it has a life beyond two weeks?

CG So it’s not the intention.

MSG It’s not the intention. It would be wonderful if it happens. You never go into it thinking about that. First you’re hoping that you can get a show together that you’re happy with. What I was most worried about with this was if it’s a new play on the big stage. It’s one thing to sell a hundred tickets on Stage Two.  I was very worried that if it failed (on the 500 seat Main Stage) she (Julianne Boyd) wouldn’t do a new play again on the Main Stage. For any writer.

CG So a lot was riding on this.

MSG For me it was.

CG Was it the success of Freud that gave the endorsement to open your new play on the Main Stage?

MSG No. It was totally Julie’s decision. I was arguing it should be on the Second Stage because it is only four characters. I don’t know if it can be on the big stage.

MSG Yes. If we had done this on the Second Stage John and Aisha would have blown the walls apart. It would have been impossible to do it there. Julie was right. She was totally right. We needed the space. They’re bigger than life the two of them. I should have been the one arguing with her to put it on the Main Stage but it was the reverse.

CG Years of work for two weeks on stage. What makes sense about that?

MSG Nothing makes sense. Theatre is like an addiction. There is no logic to it.

CG Do you feel good about yourself?

MSG No. I never do. (laughs) My wife will tell me that I’ll manage to snatch a negative out of every positive.

CG As a successful playwright you have managed to put food on the table. Do you have kids? Have you educated them?

MSG Two kids. I tried to educate them to not have anything to do with this business and failed. My son is a standup comedian. He’s doing well. He was just at the Montreal Comedy Festival. He’s making a living as a comedian. My daughter just graduated from college. She ends us fascinated with doing special effects makeup. This summer she worked on her first feature. A Rob Reiner movie. In September she’ll go out to California.

Review of The Best of Enemies