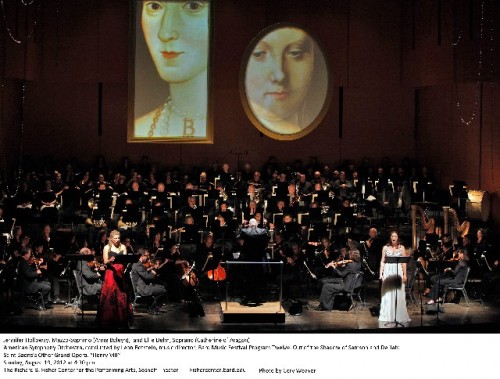 Jennifer Holloway and Ellie Dehn go at it as Anne and Catherine. 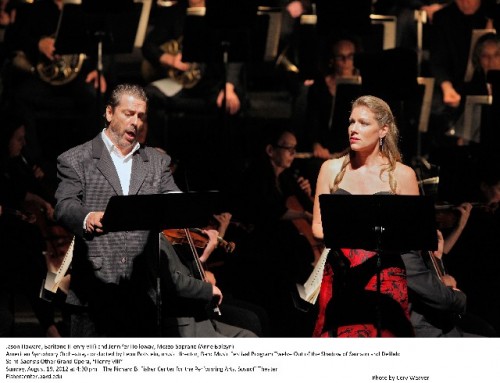 Jason Howard as Henry persuades Anne to become his mistress, but Anne rebuffs him until he promises her a crown. 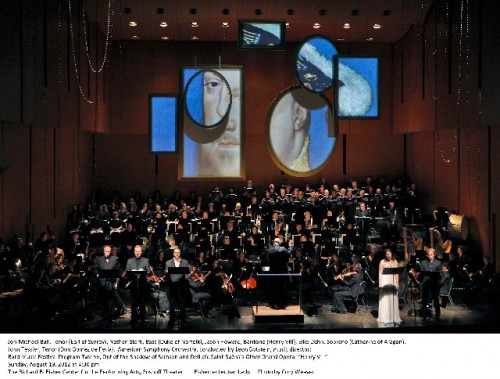 A regal production at Bard.

Saint Saens was a born musician. As a baby, he listened for every sound: doors creaking and clocks striking.   His favorite was the thrilling tea kettle, from "the first murmurs of its gentle and variegated crescendo and the appearance of its microscopic oboe, which gradually increased its song until the kettle bubbled."  Berlioz had listened to the tea kettle too, Saint Saens was convinced, as he heard Damnation of Faust's Ride to Hell.

Saint Saens' operas are seldom heard today.  Leon Botstein, the man of many wonderful hats, performs pieces whose place in our contemporary pantheon should be reconsidered --  like Saint Saens' Henry VIII.

Henry VIII is a perfectly beautiful opera, the Synod scene standing out.  The libretto is based on The Schism in England by Golden Age Spanish playwright Pedro Calderon. Calderon looked at Henry's first divorce from the Catholic point of view.  Saint Saens' opera surely makes the Catholic Catherine the most sympathetic figure.  As Ellie Dehn warmed to the role, she sang with a pure eloquence, which was also profoundly moving.  Her regal composure perfectly contained her anguish.  Recently Dehn has performed in Life is a Dream, another opera based on Calderon, for whom she seems to have an affinity. She shines in Mozart too!

Early on Jason Howard as Henry introduced himself in a beautiful aria "Qui donc commande comme j'aime."  He was able to convey at once authority, willfulness and great passion for Anne.  He and Catherine have a dramatic fight over rights and the music soars as they battle.

Anne was sung by the vivacious mezzo Jennifer Holloway, who balanced coquette with confusion over her role as lover of the Spanish ambassador, object of a King's desires and lady in waiting to a betrayed Queen.  She has a powerful, rich mezzo, perhaps a bit heavy for the role. She and Catherine have their own cat fight during Act II, where Catherine accuses Anne of seducing the King, and Anne protests too much.

John Tessier was an excellent Don Gomez, bringing drama in his spirited tenor with just the right edge.

At the Synod, Branch Fields is basso profundo as he prays for guidance from above.  Henry is appropriately slimy as he twists the Bible to his purposes; the Queen, touchingly pure as she pleads her case.  Don Gomez, a surprise witness, says war with Spain will follow if the King has his way.  But his way the King has, backed by the people echoing the English melody first played in the prelude.  Saint Saens had found the music when he was doing research in the music library at Buckingham Palace.  He consorted with Queen Victoria and Queen Alexandra in England and knew the royal character well.

The concert performance at Bard was accompanied by projected graphics in picture frames at the top of a packed stage.  Many horns were added for the pageantry the composer provides and a chorus was led by James Bagwell.

Critics of the original 1883 production  stated that Henry was a slim, unmotivated character.  Saint Saens picked up his pen.  "Consider Boris Godounof. I heard pleasant and impressive passages and others less so. In one scene a man becomes the Emperor when he was only a friar in the scene before. An entire act is made up of processions and ringing bells.  In another scene a nurse tells pretty stories to her charges..Chaliapine was admirable.  It was not my fault if I did not discover in all that the inner life, the psychology and explanations critics claim they do not find in Henry VIII."  He goes on to point out musical themes, which connect accompanying emotions throughout Henry.

Saint Saens correctly points out that Henry's passionate, black soul is etched in the scenes with Catherine, particularly when he reveals his wish to get rid of her.  The last scene of the opera is laced with hypocrisy,

Treading into territory the composer himself opened, and trying to answer why this compelling opera whose music is glorious, is not often performed, we can look again to Saint Saens. He said music must always be moving and interesting.  Something fails in the opera up until the Synod. There are beautiful arias and duets and they were performed with moving emotion and beauty at Bard.  Yet they felt thin spread before the Synod scene when the music and the action take off.

The Bard staging suggests that solving Henry VIII's problems may be well worth the effort.  This is after all the back story to Anna Bolena.