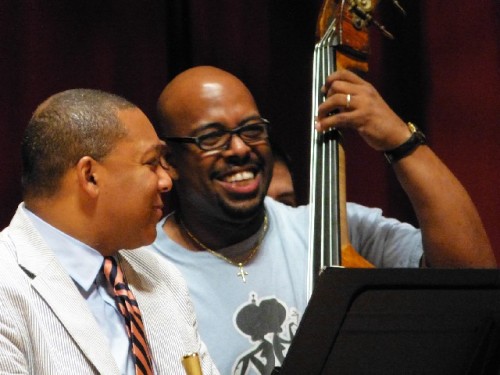 Wynton Marsalis and Christian McBride returned to Tanglewood after an interval of many years. 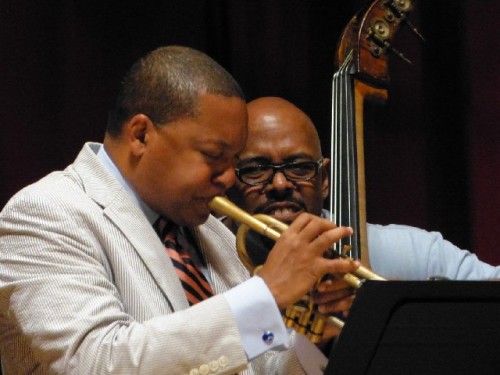 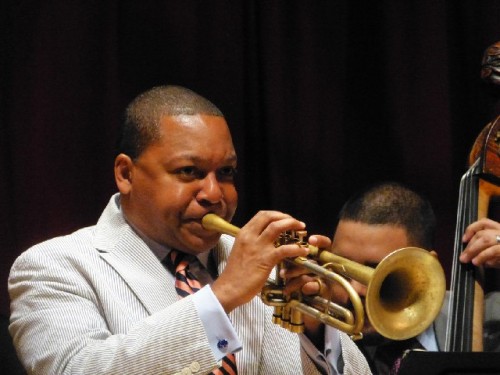 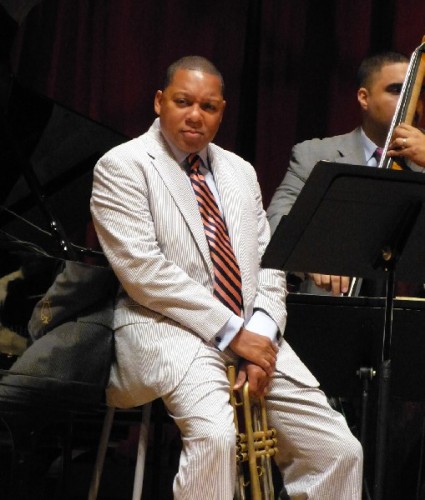 Taking a break during the set. 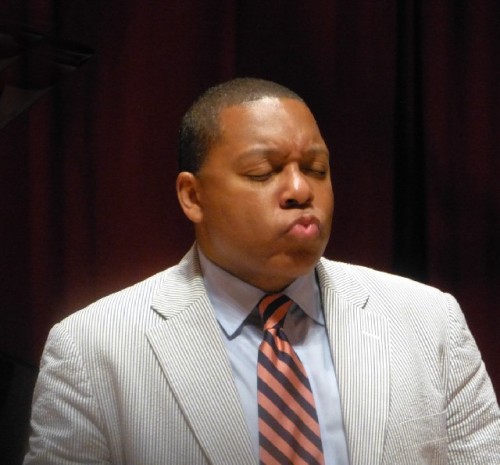 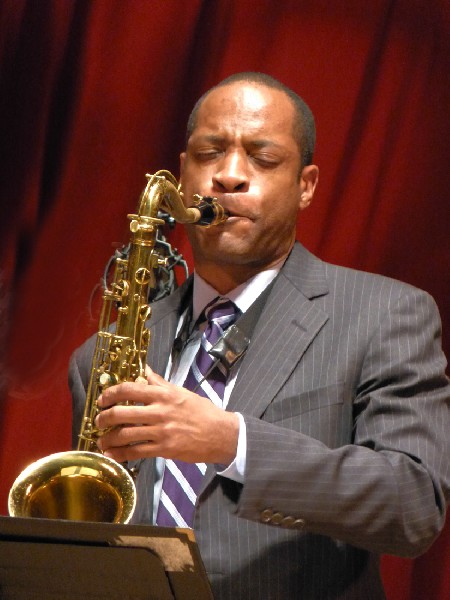 Sax Player Walter Blanding is a member of the Jazz at Lincoln Center Orchestra. 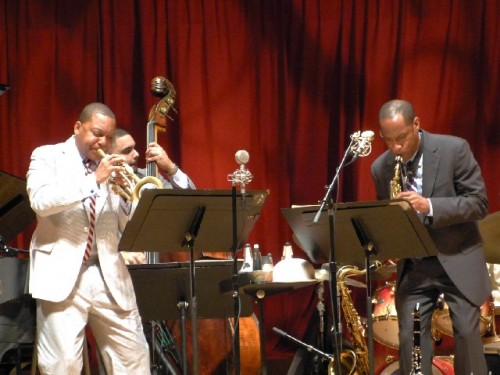 The quintet performing straight up jazz. 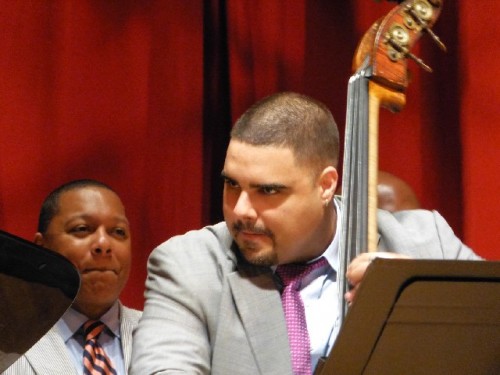 During the jam session Carlos Henriquez shared bass with McBride. 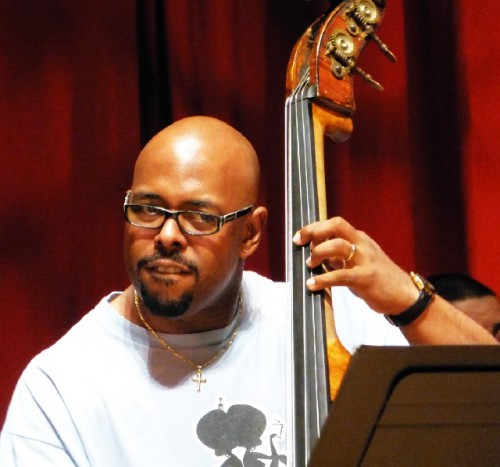 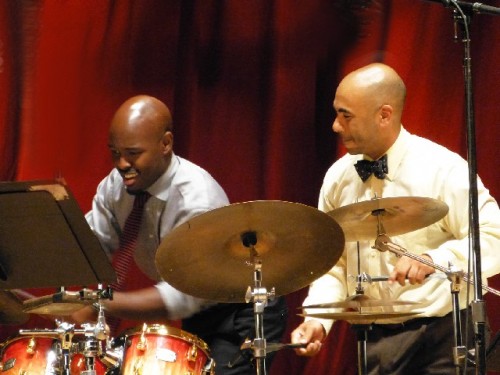 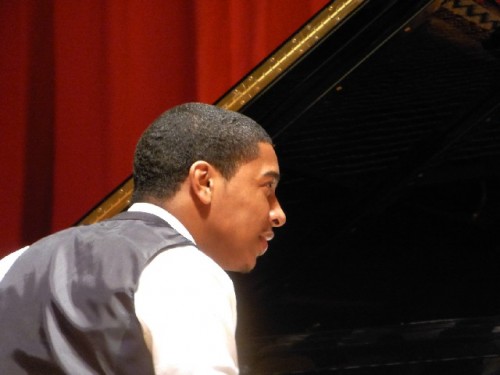 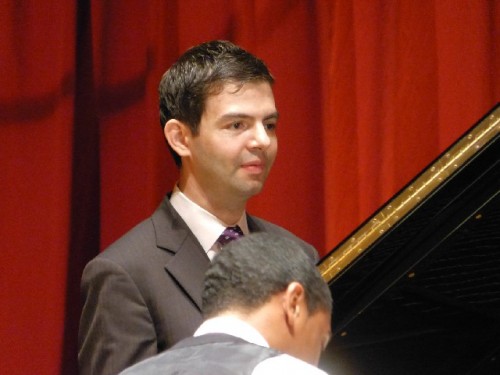 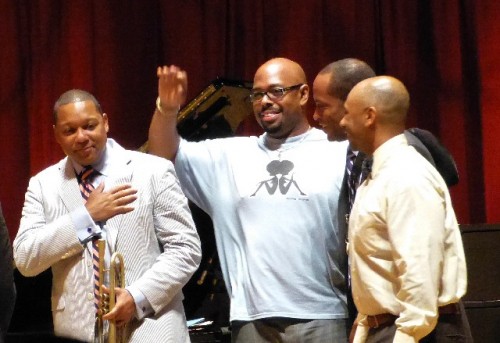 A heart felt performance at Tanglewood.

Both nine time Grammy winner, trumpeter Wynton Marsalis leading his Quintet, and renowned bass player Christian McBride with a trio, commented warmly on the honor of returning to Tanglewood. But, for both, not in many years.

On an overcast Monday evening, with soft sprinkles that did not discourage a large gathering on the lawn, they thrilled a near to capacity audience in Ozawa Hall with a stunning, three hour performance connected by a twenty minute intermission.

Adding to a remarkable performance by Chris Botti, a mixed classical/ jazz appearance by the French based Ebene Quartet, and Chick Corea with Gary Burton slated for Sunday, August 26, there appears to a be a welcome policy shift. Tanglewood has presented A List jazz artists this season. Fans, however, lament the elimination of the established, season ending, annual Tanglewood Jazz Festival which introduced many emerging artists.

Last night, however, we laid back and imbibed intoxicating, top shelf jazz.

With a dash of ironic humor McBride described his “Cocktail Trio” as a warm-up act for the top billed Marsalis Quintet.

It proved to be anything but as we were introduced to a prodigy, the now twenty-three-year old pianist, Christian Sands, who started playing at three and composing at five. We quickly realized the presence of a musical genius. A superb drummer, Ulysses S. Owens, Jr., who appeared in the Tanglewood Jazz Festival last year, completed the rock solid trio anchored by McBride who played the bass with the kind of virtuoso expression, including flowing, lyrical solos, that one associates with a cello or guitar. It is an approach that evokes standards for jazz bass established by Charles Mingus and Ron Carter.

The hour plus set by the McBride Trio was so stunning and absorbing that it proved to be a hard act to follow. Rather then just warm the stage for Marsalis the bar was set impossibly high. Deliciously, as a finale, Marsalis asked McBride and his trio to join his group. It was an astonishing treat for the audience as McBride and the superb Carlos Henríquez switched off, the drum kit alternated between Owens and Ali Jackson, or Dan Nimmer and Sands took turns at the piano.

In the best tradition of a jam session the audience delighted in hearing the musicians straining to push and out perform each other. It was clear that everyone on stage was having a ball. Wow. We hope to see a lot more of that kind of excitement at Tanglewood.

The McBride Trio opened with an as yet untitled blues. He spoke to the audience about returning to Tanglewood for the first time in seventeen years. Among those whom the young Sanders studied was the Canadian master Oscar Peterson. They performed his “Hallelujah Time!” Followed by  Billy Taylor’s “Easy Walker.”

They stretched out with a long vamp that featured the improvisational skills of Sands. There were fast runs in the tradition of Peterson, with a delicate, feathery touch. As well as avant-garde excursions that evoked a more lyrical Cecil Taylor or chops comparable to Keith Jarrett, Chick Corea or Herbie Hancock way back when. Yes folks, he’s that good.

At times he stood and leaned into the heart of the piano strumming and plucking the strings. McBride and Owens responded with their own unique flourishes on bass and drums.

As the music veered off into the stratosphere I looked about at the attentive but straining response of the audience. Perhaps they were being pushed out of their comfort zone which never really happened with the more mainstream, straight up, laid back, academic playing of Marsalis and his Quintet.

Just when it appeared that Sanders was stranded out there at a bridge too far he neatly dropped down into the bridge with a very recognizable, lovely and exotically flavored take on “My Favorite Things” from The Sound of Music. It was a standard that jazz fans associate with the lyrical, sandpaper textured soprano sax of the late John Coltrane. But, while remaining for a time comprehensible, Sanders pushed further than Trane ever strayed on that tune. Having established the melody Sanders then provided ever more extended variations dissecting and reconstructing phrases that were tantalizing echoes of the refrain if you had the chops to follow along.

There was mostly polite applause but I am not sure the audience complexly dug what they had experienced. To paraphrase Jon Landau, when he first heard Springsteen at Joe’s Place in Harvard Square, ‘Last night I heard the future of jazz. His name is Christian Sands.'

They followed that with a more lyrical retreat to “I Have Dreamed” from The King and I. Perhaps, having pushed the audience to its limit, McBride was recapturing hearts and minds. In a lovely passage McBride bowed his bass.

Finishing the set he informed us that the tune is usually dedicated to his wife. Particularly as they are about to celebrate their seventh anniversary. But on this occasion he noted the passing of comic Phyllis Diller at 95 followed, my goodness, by a pretty straight up “The Most Beautiful Girl in the World.”

Marsalis opened the set with the complex, multi faceted “Magic Hour.” It presented many different moods and textures. At times he evoked strained, overblown, squeaky textures in a register and manner that recalled the style of Duke Ellington’s upper register specialist Cat Anderson. There were fast, trilling passages echoing the virtuoso vehicle “Flight of the Bumble Bee” by  Nikolai Rimsky-Korsakov. It is not surprising to find classical quotes as Marsalis has won Grammys for both his jazz and classical recordings.

He recalled how as a “country boy from New Orleans” at just 17 he spent a summer as a Tanglewood Fellow. The experience of being in the company of such serious fellow students and faculty made an enormous impact on his development. He recalled performing with pianist John Lewis of the Modern Jazz Quartet during the opening celebration for Ozawa Hall. But this was his first Tanglewood performance since 1987.

Chatting amiably with the audience he broke down “Magic Hour” about that time of night when parents put their children to bed and all the drama that entails. “It starts with some 4/4 swing, then a bit of comforting blues, followed by some Afro/ Cuban beat while the kids go to sleep and  the parent go horizontal.” That was followed by a Benny Goodman standard “Goodbye” composed by Gordon Jenkins.

That introduced “Doing Our Thing” which “May also be ‘Doing Your Thing’ either way is OK." There were nice trades with Walter Blanding who mostly played tenor sax but also switched to soprano sax and one tune using clarinet. The piece entailed literal, programmatic passages that made me think of the cacophony of street sounds in Gershwin’s 1928 “An American in Paris.”

While amiable and charming the playing of Marsalis often seems more technically brilliant than deeply felt. He is acknowledged as the current master of his instrument. But, as such, he lacks the wow factor that we always felt when hearing Miles Davis or Dizzy Gillespie.

What is most impressive about Marsalis is his deep understanding of all phases and styles of the masters of jazz. He has the ability to channel and demonstrate an amazingly encyclopedic range of classic technique. This was demonstrated brilliantly when he quoted from early New Orleans style jazz with a stunning and spot on recreation of the blues “C.C. Rider” or “See See Rider” which was first recorded by Gertrude Ma Rainey in 1924.

He reminded us that it was played by the legendary New Orleans trumpet player Buddy Bolden. That seminal artist never recorded and spent most of his adult life in an asylum. But he is acknowledged as the master who influenced King Oliver, Freddie Keppard, and the teen-aged Louis Armstrong.

Introducing the vintage song he said “We need to bring everyone along with us from the bitty bitty children to the old folks.” With Blanding on clarinet they gave a clinic on the style and feeling of early jazz. Blanding’s clarinet licks recalled Johnny Dodds or George Lewis. Marsalis demonstrated both bell mute and plunger mute techniques. From the historic they evolved into a more contemporary take opening up on the blues standard.

Before bringing on the McBride Trio for a jam Maraslis recalled how as a lad of just 23 during a festival Pearl Bailey came to his dressing room and offered him a ‘gift’ to play with her. She explained that it would be a “kind of love which, one of these years, you will understand when you reflect on this.” He explained that as an improvised music, not dependent on a written score, you can jam with musicians all over the world. “But it don’t always sound good” he said. Because when you are improvising there is a freedom in which you might “bang up against the other players you are playing with. So we would like to invite Christian McBride and the other cats to come up and play with us.”

Yeah, they did bang into each other. That’s what happens when the music is spontaneous, unrehearsed, edgy and competitive.

That’s jazz man, and Tanglewood could use a whole lot more swing.