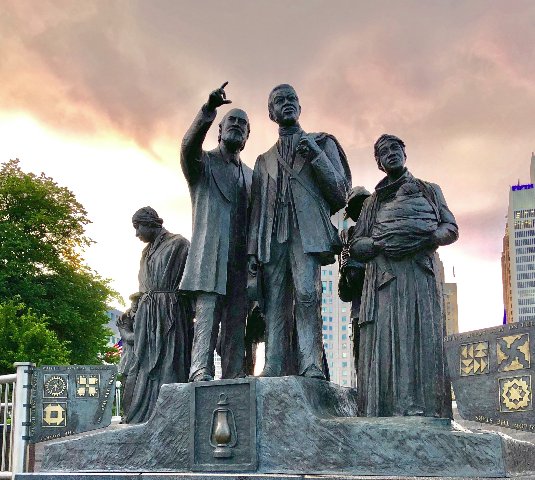 View of Windsor, Ontario, Canada, from The Gateway to Freedom monument in Detroit. 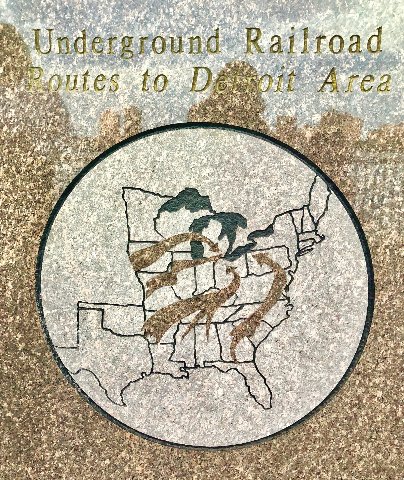 Detroit’s proximity to the Canadian border made the city a point of convergence for those seeking freedom outside theUnited States. 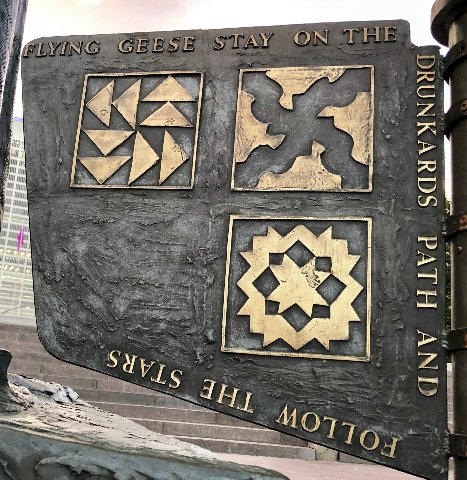 Flying Geese, Stay on the Drunkard’s Path and Follow the Stars all refer to quilts that some historians theorize signaledthe location of safe houses on the Underground Railroad route.
MIDNIGHT ON THE EDGE OF FREEDOM: REMEMBERING DETROIT’S KEY ROLE AS A
STATION ON THE UNDERGROUND RAILROAD.

From the early 1800s, The Underground Railroad, a network of secret routes and safe houses, was
used by enslaved people in the United States to escape to free states
and to Canada. The Railroad, at its most active between 1850 and 1860,
followed more than one path, but none was more important than the way
through Detroit, Michigan because Canada was the ultimate destination
for many freedom seekers. Code named “Midnight” by Underground
Railroad “conductors,” Detroit provided access to Windsor, Ontario,
Canada just across the narrow Detroit River. The important role
Detroit played is honored by the International Underground Railroad
Memorial, consisting of bronze sculptures by artist Ed Dwight. “The
Gateway to Freedom” on Detroit’s waterfront depicts a group preparing
to board a boat.  Pointing towards Windsor is George DeBaptist, a
Detroit resident who helped those making their way to freedom. The
Memorial is inscribed both with maps showing Underground Railroad
routes to Detroit and with details of quilts that some historians
believe were used to communicate information about safe houses.
MOVING, EMOTIONAL AND INFORMATIVE: THE UNDERGROUND RAILROAD LANTERN
WALKING TOUR FOLLOWS IN THE FOOTSTEPS OF FREEDOM SEEKERS.

City Tour Detroit offers a walking tour that leads participants along two miles
of the path freedom seekers took, beginning with a reenactment inside
a safe house located in the isolated cellar beneath an historic
church. City Tour Detroit Director Karin Risko said, “The idea for the
Incredible Journey to Midnight tour came to me in early 2012 when I
wanted to offer something different than other tour organizations in
Detroit - evening lantern walking tours. I knew I had to do the tour
after a conversation at work about my proposed tour elicited the same
response from both black and white co-workers: "I didn't know the
Underground Railroad ran through Detroit." I knew then, the story
needed to be told and eventually came up with idea of using actors to
tell the story. People find the tours emotional and informative. The
reenactment in the basement of Second Baptist Church is both moving
and disturbing as attendees get a brief glimpse into the dire
circumstances freedom seekers faced. In a pitch black, crowded
basement room they hear the ominous pounding on the door of a slave
catcher and his footsteps are just a few feet away from their hiding
place.” Derwin McKinney, who portrays abolitionists Frederick Douglass
(1818-1895) and Henry Bibb (1815-1854), said, “We get so many people
who start off the tour reserved but then open up along the way in
response to our powerful and thought-provoking scenes.  This tour is
unlike any other. We touch people emotionally and involve them in an
interactive journey that follows in the footsteps of freedom seekers
and climaxes at the Detroit River.”
CITY TOUR DETROIT PARTICULARS.

The Incredible Journey to Midnight: Detroit Underground Railroad Lantern Walking Tour is offered on select
Saturday nights, including Aug. 25 and Sept. 29. The tour starts at
Second Baptist Church, 411 Monroe St. Detroit and ends at the Gateway
to Freedom Monument, 1 Hart Plaza, Detroit. For more information,
visit citytourdetroit.com/journey-to-midnight.
AND REMEMBER.  Traveling – It leaves you speechless, then turns you
into a storyteller. Ibn Batutta.
Susan Cohn is a member of the North American Travel Journalists
Association, Bay Area Travel Writers, and the International Food, Wine
& Travel Writers Association. She may be reached at
susan@smdailyjournal.com. More of her stories may be found at
http://ifwtwa.org/author/susan-cohn.
Back to Front Page Section Home