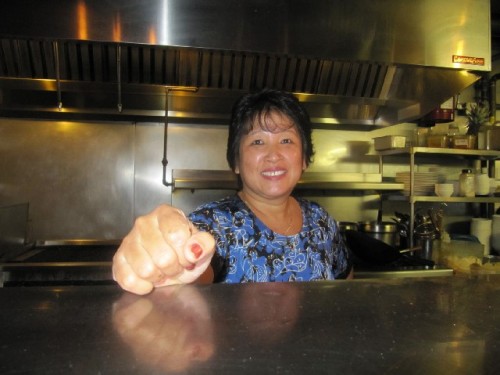 Sabrina Tan at home in her Pittsfield Kitchen. 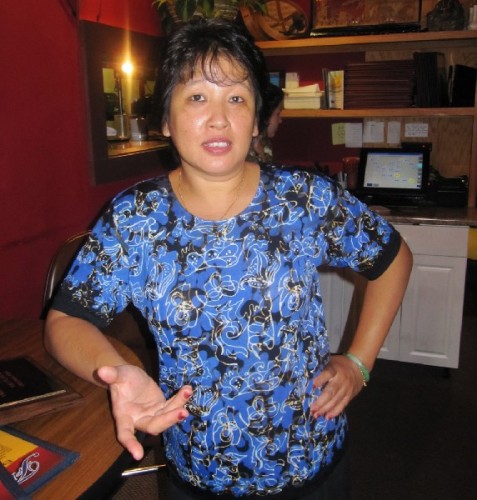 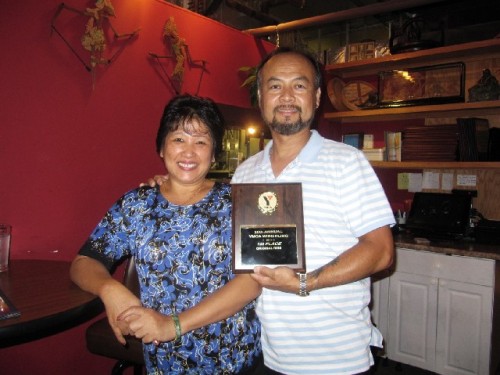 Sabrina and Chin Lee display an award they won for their ribs. 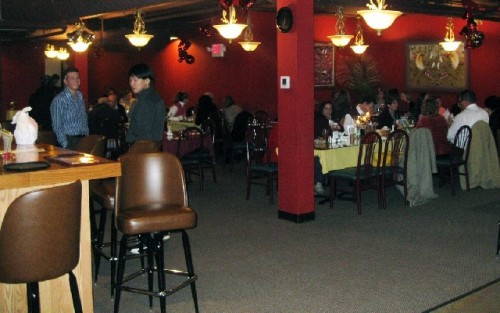 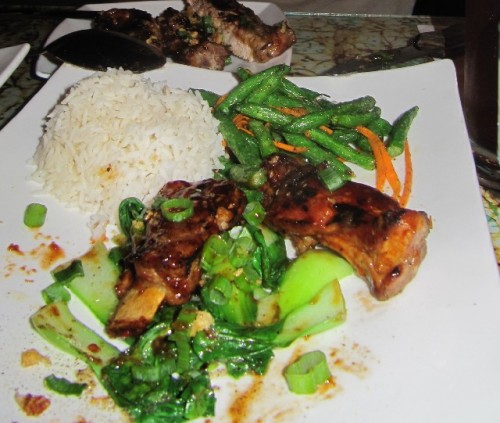 A serving of Asian style ribs. 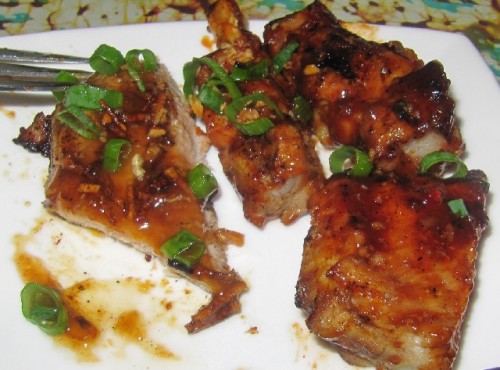 Sharing the ribs and chop. 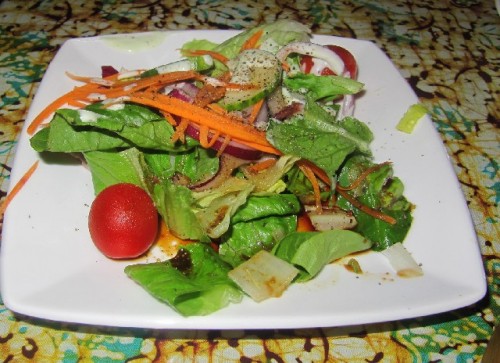 A side salad comes with the dinner. 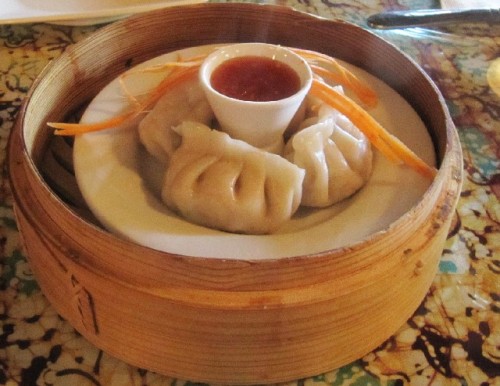 Sabrina sent over a sample of her signature fresh dumplings.

Flavours, a basement restaurant at 75 North Street in Pittsfield is not what comes to mind when seeking out neighborhood rib joints in the Berkshires.

Tender, falling off the bone ribs and barbecue pork chops are just an aspect of the menu of the Malaysian born chef Sabrina Tan. With her husband Chin Lee they relocated from a struggling other location a couple of years ago. They have been enjoying great success at their new venue.

We were early for lunch but by the time we left the restaurant was full. Mostly with large parties of co workers who appeared to be regulars.

Although we came specifically for the barbecue it was not included on the lunch menu. But the dishes were available for the full price dinner menu. So it proved to be a bit pricey for lunch but worth every penny.

Cisco tried the ribs previously and insisted to Pancho the we must include Flavours in our barbecue survey.

Initially he was skeptical but emerged as a convert. Putting Sabrina’s barbecue on the top tier of a lifetime of tasting. Not just a Best of the Berkshires but on the all time, lifetime achievement list. Since Pancho has dined at Michelin rated restaurants, on other people’s money, that is quite a statement.

We ordered a rib dinner as well as the barbecue pork chop. They are similar but different. The sauce is the same as well as the presentation with wilted bok choy, white or brown rice, green beans and a side salad with choice of dressings. Mostly it was a matter of texture and a choice between a solid pork chop or the ribs chopped into serving sized portions.

The sauce, which is outtttahssiggght was the same for both. Sweet and loaded with accents.

For classic barbecue there are two main elements. The slow cooking of the meat. Preferably with a variety of smoky hard woods. Not the case here with oven cooking. But the other half entails the sauce.

We lured Sabrina out of the kitchen to talk about the sauce.

“Everything is about flavor that’s why we call our place Flavours., “ she said. “I use a regular barbecue base. From there I do whatever I feel. Everything I do is by taste. It changes, totally. The final flavor is what I add. Chili sauce. Lots of garlic, and lots of ginger. A little shallots. A little teriyaki and that’s it.

”We want to invite Bobby Flay to have a throw down.  He has restaurants all over and he’s on TV. A lot of our customers already wrote to him. A throw down is a challenge. He will cook his kind of ribs and I will cook mine.

“People come for the curries and the freshness of my food. After they try one dish they start at the top and work their way down through the menu.

“So far from your taste has anyone in the Berkshires beat me yet for ribs?

“I came here from Malaysia and got my taste back when I couldn’t find any Asian restaurants that serve authentic food. They are all Americanized. I started in Boston and went to most of the restaurants. They serve Chinese food but it is totally Americanized. Once or twice a month we went to New York just for the food. We get our food supplies in Flushing. There is a super market in New York called Top Line and that is the store which I go to the most. “

As we dined Pancho commented on the experience.

Every single flavor can stand on its own. Put together it’s a symphony. This is one of the best restaurants I’ve visited in the Berkshires. It’s real cooking. Not fancy but authentic. In barbecue there’s the Texas, Kansas, Memphis, the South Carolina and Northeast. Possibly the Berkshires. But this one stands on its own. The Asian touch separates it from the rest. This gives it its own character. The ginger and Asian chili are unique. The way they do it. The pork chops and ribs are different but equal.

If there is a criticism it’s that she has cut the ribs into smaller portions. I would prefer to have the whole rib. Barbecue is not fancy cooking. If there is a fancy barbecue that succeeded it would be this. This is more complex than the usual barbecue.

I have been tasting barbecue all my life and this is way up there. It compares to Virgil’s in New York (152 West 44th Street between Broadway and 6th Avenue).

All regional barbecue styles have a commonality in Americana. This is different. It is original. That puts it in another sphere and the taxonomy would be difficult. Some people may say, well, it’s not barbecue. It has broken certain traditions.

What is very clever is that she connects with the American lexicon by starting with a basic barbecue sauce. She starts from there because she wants to connect with this culture. But everything else is outside. So the question is will the base, the basic sauce show up? But it’s just a base for color. In classical music we would call it a continuo. It’s a bottom. The substance comes with what she does after that.

Overall I would give her barbecue 8 and a half out of 10.