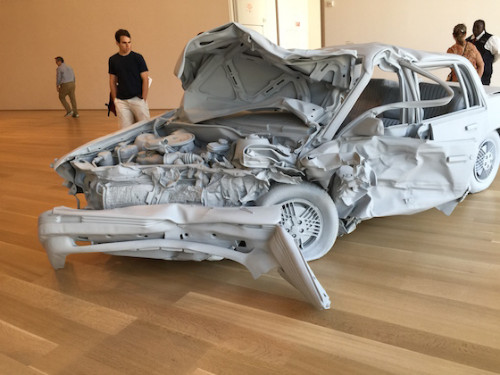 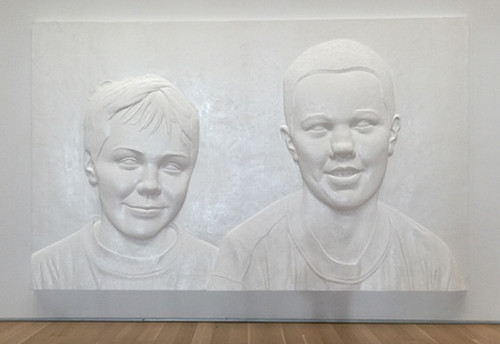 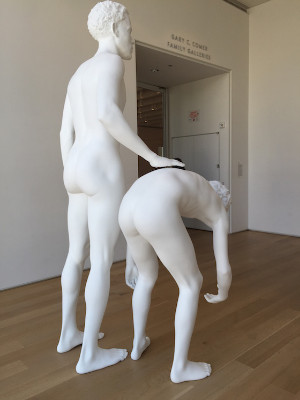 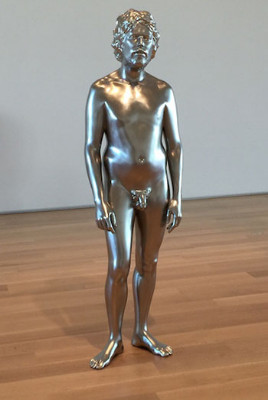 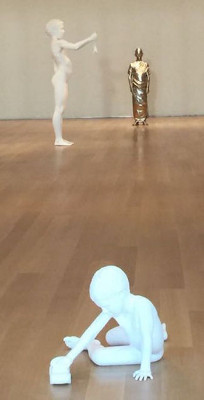 Nineteen sculptures by Chicago-born sculptor Charles Ray fill three large galleries on the second floor of the Chicago Art Institute's Modern Wing through October 4. Most of the pieces are figurative and tell their own stories, like "Sleeping Woman," a life-size stainless steel carving of a homeless woman sleeping on a bench. But a few are shockingly not figurative and two of the figurative ones have already shocked museum curators.

"Unpainted Sculpture" (1997, fiberglass and paint) is a faithful reconstruction of a crushed 1991 Pontiac Grand Am. Ray searched for the right wrecked car -- not too wrecked -- and then had it taken apart so that each piece could be constructed of fiberglass and then assembled as a car. Several people spent five days reassembling the sculpture in the Modern Wing gallery.

Some of Ray's figures may remind you of classical Greek sculptures -- for instance, "Young Man" (2012, stainless steel) -- but these contemporary figures invite you to wonder what they're thinking or what just transpired in their lives. Some of them seem to be mischievously trying to draw you into their orbit. Some have gravitas, while others have an eerie sentience, despite the fact that Ray has said "My work is about nothing."

The sculptures fill a whole floor of the wing with windows looking out at Millennium Park, while two others are in other locations in the museum. The design of the exhibit is elegant in its simplicity and stylized in its arrangement. An Art Institute lecturer recently described the process of Ray's work (some figures are constructed over a decade or more). Most of the sculptures are very heavy, weighing 3000 to 4000 pounds or more. "Horse and Rider," with Ray as the slouching rider on a tired horse, is placed in the museum's South Garden, and weighs 10 tons. I asked whether the weight of the sculptures was a factor in the exhibit design, which displays the pieces widely spaced, with only a few pieces in each gallery. He said that certainly the weight was a factor, and that the pieces tend to be placed over structural beams.

The most controversial work in the exhibit is "Huck and Jim" (2014, white painted glass-reinforced plastic). The massive piece, with the figures constructed at 150 percent of life size, is in a small gallery off to the side of the main galleries and probably is the reason that the exhibit has a warning that some works may not be suitable for younger viewers (who presumably would be traumatized by seeing male genitalia).

Ray focuses on the relationship between Huck and Jim in the Mark Twain classic, The Adventures of Huckleberry Finn. The story tells of the two runaways -- Huck running away from his despotic father, and Jim, escaping from domestic slavery -- and their life on the raft on the Mississippi River. The fact that the figures are oversize and naked (Ray quotes Huck saying, "we was always naked, day and night, and besides I don't go much for clothes, nohow.") has caused the controversy. The suggested relationship between the two figures also apparently troubles some. The work was first created for the plaza outside the new Whitney Museum near the High Line in New York, but the museum rejected it as inappropriate for a public plaza. In Chicago, the work was first to be placed outside the Modern Wing entrance, but was rejected for the same reason. So it has been moved inside and tucked into a small gallery. (The museum's logic is that people who see a work inside a museum have implicitly agreed to its presence.)

Another controversial figure is "Boy With Frog," one piece of what Ray calls "Accidental Trilogy." Three sculptures show a boy at three ages -- 6, 9 and 12 years old. The 9-year-old is eight feet tall, holds a frog, and is naked. We've been looking at classic sculptures of naked men for centuries, so I don't understand this new Puritanism. "Boy with Frog" was installed in Venice in 2009 but was criticized by locals and removed in 2011.

Three bas-reliefs are in the exhibit, each showing figures in almost-flat wall-mounted white surfaces. "Two Boys" (2010, fiberglass) shows two brothers posed side by side and was partially inspired by another Art Institute work, Alex Katz's "Vincent and Tony" (1969, oil on canvas).

Ray was born in Chicago and grew up in South Shore and Winnetka. His parents ran the Ray-Vogue School (now the Illinois Institute of Art), a commercial art school founded by his grandparents. He studied art at the University of Iowa and Rutgers and is now based in Los Angeles. While he is not well known to the general public, his work appears in major museums and is purchased by collectors at multimillion-dollar prices. If you're interested in more information about Ray and his work, see this excellent New Yorker profile by Calvin Tomkins.

Charles Ray: Sculpture, 1997-2014 continues in the Modern Wing at the Art Institute of Chicago, 111 S. Michigan Ave. (or enter the Modern Wing on Monroe Street), through October 4. The museum is open daily 10:30am to 5pm and until 8pm on Thursday. General admission is $25 with reduced prices for Chicago and Illinois residents, students and seniors. Members are admitted free.