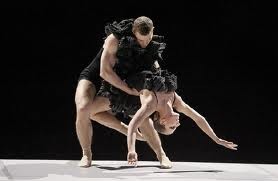 Annika Lindquist of The GÃ¶teborgs Ballet in "Episode 17" of "3xBolÃ©ro."

Being amusing and whimsical takes a lot of hard work. Everyone wants to be the wise guy once in a while who gets the biggest laugh. But what some people find funny can strike others as just plain annoying.

I was thinking about this fine line between clever and stupid, as Nigel Tufnell once brilliantly put it in the mock documentary “This is Spinal Tap,” during “Episode 17,” the third and final section of The Goteborg Ballet’s fantastic work, “3xBolero,” which the company performed this past week at Jacob’s Pillow Dance Festival in Becket during their U.S. Debut.

Like the other two sections in “3xBolero,” the iconic music by Maurice Ravel serves as the foundation for “Episode 17.” But instead of being dramatic like “Walking Mad,” the first section of “3xBolero,” or starkly experimental as in “OreloB,” the second section, “Episode 17” played like Bolero as interpreted by Monty Python’s Flying Circus. Miraculously, the dance company pulled it off, in all its absurd, anarchistic glory. Why miraculously? Because while Monty Python were geniuses of the ridiculous, countless imitators over the years have been anything but funny or amusing.

The last time I remember laughing so hard during a dance performance was during certain sections of “Tense Dave” performed several years ago at the Pillow by the Australian group, Chunky Move. And while I often find talking by performers during dance performances almost as annoying as talking by audience members mid show, the Goteborg Ballet managed to pull it off. The difference? Good writing. Whoever wrote the dialogue for “Episode 17” (I’m assuming it was the work’s choreographer Alexander Ekman) knows how to balance the absurd with the amusing, all the while remaining entertaining.

The middle episode of “OreloB” was the only section of “3xBolero” which seemed slightly off. One friend of mine felt the piece would have benefited from some editing. Maybe. But for me, I just couldn’t get past the male costumes. Like the women, the men in “OreloB” wore black paper mache constructions gone mad around their arms and necks. They looked like the asinine puffy shirt Jerry Seinfeld unknowingly agreed to wear once on the TV comedy because he couldn’t hear “the low talker” ask him to wear the shirt.

Then again, I was willing to cut the Goteborg Ballet some slack for “OreloB” because I was so fascinated and entertained by “Walking Mad,” the first part of “3xBolero.” There was so much going on during this part of the performance to keep me entertained. Like “Episode 17,” there were madcap sections in “Walking Mad” featuring dancers with red pointy hats chasing after one another. There was also passionate, moving dancing to the seductive, rhythmic music. And throughout it all, the dancers climbed over or threw themselves against a large wooden wall bent back and forth before ultimately collapsing in dramatic fashion. “Walking Mad” might sound like a haphazard mess. But for me, the seemingly unrelated elements combined to create a single, rich, engrossing work.

No wonder The Goteborg Ballet is the largest contemporary dance company in Nordic countries. In that fine line between clever and stupid, this dance company brilliantly flirts right between the two. And that’s no easy task, no matter what Nordic country you’re from.