Women of Will at Shakespeare & Company 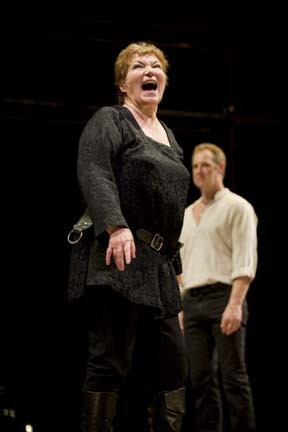 Tina Packer in Women of Will. Kevin Sprague photos. 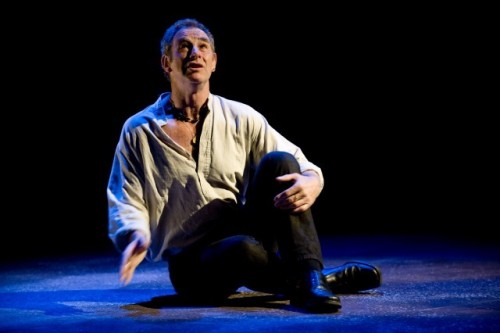 Nigel Gore is a perfect stage partner for Packer. 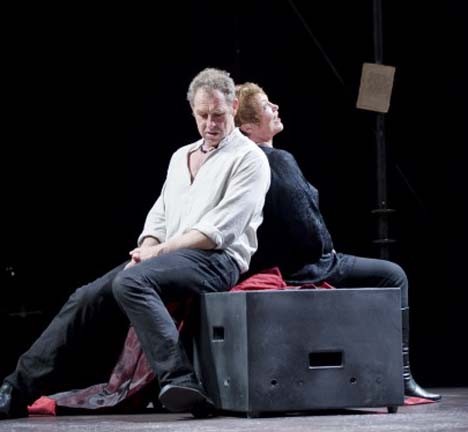 Over three days, August 26 through 27, Tina Packer and her partner, Nigel Gore, are presenting five separate performances of her epic, career long project Women of Will the Complete Journey. Interview with Packer on Women of Will.

Based on our experience last night of Act I: Warrior Women from Violence to Negotiation, arguably, performance is not the adequate word. It might be better to say it was Packer’s gift, a treasure offered with care, love, and insight, as well as lots of bawdy humor, to an attentive and dedicated audience.

It was the culmination of a life long immersion in the work of William Shakespeare. We were the beneficiaries of hard earned study, insight and interpretation. The event or experience, as is typical of Packer, existed on many levels simultaneously.

Remarkably, last night Shakespeare & Company was running at full tilt with plays on stage in both the Founders Theatre and the Elayne P. Bernstein Theatres. We were surprised to find ourselves directed to the Bernstein Studio, a large rehearsal space. Where S&Co is known for its minimalist, bare pipe productions, this performance went even beyond that. Instead of a stage and sets there were just props and occasional costume changes.

We experienced a work in progress, a form of staged rehearsal, in which the director, Eric Tucker, was a character. He interjected and the actors responded. Between scenes the actors talked to each other and often Packer was out of character conversing with the audience. There was a lot of discussion between scenes informing us of the history of the plays. Last night the focus was on the early plays and the five compilations are presented in historical chronology. She discussed theories of how Shakespeare evolved in his writing about and understanding of women.

His first play is believed to be Henry VI, Part I, written in 1588. By his tenth play Romeo and Juliet, in 1594, a brief scene of which ends Act 1, Packer believes that he started to write within the persona of the women. She described Juliet as the equal of Romeo. That it was she who initiated the idea of marriage. A scene from Romeo and Juliet ends Act 1 and begins Act II.

With all of the out of character discourse, history, discussion of theory as well as bantering between Tina, Nigel and Eric, it was hard to get a fix on exactly what was transpiring. Perhaps it was a form of avant-garde conceptual theatre. A play within a play with aspects of real time and real life.  An update of Pirandello’s Six Characters in Search of an Author. Was it a comedy routine with serious intervals interspersed? Another approach was that of a staged and demonstrated lecture. In that last definition Tina is such a generous and gentle teacher. She nudges us into sharing her passion and understanding of the Bard. The most complex and esoteric issues are broken down in plain speech set to intervals of his iambic pentameter. How Tina.

There was sweat equity. Her hair was soaked. Eric provided a towel at intervals to which she responded “Thank you darling.” One simply marveled at her energy. Even sharing the exertion with the audience stating with disbelief, it was now approaching the three hour mark of 10 PM, that the next performance was scheduled for 9:30 AM. Then 2 and again the next day. That’s a remarkable 15 hours of performing over three days. How does she do it?

What about the demands on the audience? At one point she asked the packed, sold out audience how many planned to see all five acts? It was astonishing to see about three quarters raise their hands. We observed many taking notes. This was indeed a very serious audience.

With the exception of the several who slipped out near the end of the evening. There was a party scene from Love’s Labor’s Lost. Tucker suggested a Seventh Inning Stretch. Thanks we needed that. The music of the Beatles was piped in as we all danced. Never missing a beat Tina joked about her departed guests. One surmises that they pooped out at Heartbreak Hill and will not return.

Which, alas, describes us as well. With too much on our plate I am writing this review while Tina is on stage performing.

Our hope and expectation is that the series of plays will return to S&Co or perhaps travel to other stages. As Tina stated last night the project has developed to the point where it needs live audiences and feedback. There were pens and notepads in the lobby encouraging communication. This is  work that deserves wider exposure.

It also entails concerns for Tina and Nigel and their ability to sustain the intensity. It is typical of S&Co that everyone multi tasks. Nigel is currently in Richard III and this was added to his menu. For some 15 hours of theatre there was hardly time for adequate rehearsal. Tellingly, Nigel several times called for line prompts. Particularly in Joan, Charles, and York from Henry VI Part I. It was a very popular play in the Elizabethan era but rarely performed today. Nigel told us between scenes that he was unfamiliar with the play and the scene until they rehearsed it.

There was a discussion between Tina and Nigel about the differences between those two scenes. It was the kind of dialogue between two superb and experienced actors that signified the unique nature of the evening. We were allowed to be flies on the wall as the actors explored their craft.

Tina asked Nigel how he felt about the ultra vi of their exchange as Margaret and York. She tears into him with savage hate and fury. It signified her notion of From Violence to Negotiation. He talked about how he really hated her and restrained himself from inflicting bodily harm. She has captured him in battle and is about to chop off his head. Not before some choice insults. Nigel expressed rage at being defeated but the particular anger of being humiliated by a woman.  He described how he was also tempered and modified by the expressions of love in the preceding scene. Which is among the most tender and human expressions of love from one person to another in the entire canon. He discussed the beauty of the poetry as Shakespeare at his best.

For her part Tina discussed how a relationship of trust with an acting partner allows her a platform to express such violence. She described coming from a pacifist family and had not known that anger and sense of vengeance in herself as a young woman. But through acting she found those dark channels that exist in all of us. This was the scene during an audition as a young woman that got her into the Royal Shakespeare Company.

She went off a bit about the theme of violence and vengeance drawing analogies to 9/11. How we lost 2,000 lives but through acts of vengeance in Iraq some 100,000 people died. How do we end the cycle? And that actors by exploring those emotions in their craft have a special understanding of war and violence. Pure Tina. Bless her. May her tribe increase.

The special gift of women is to make peace. To use their power and sexuality to end violence and vengeance. Richard III demands Elizabeth’s eldest daughter as his queen. He has already murdered her sons, the Princes. But Elizabeth, of the House of York, aspires to wed her daughter to the Duke of Richmond the leader of the rival House of Lancaster. Which happened after the defeat of Richard. By uniting enemies through matrimony Elizabeth achieves peace and ends the War of the Roses.

“What would have happened if Richard won the battle of Bosworth Field” she asked us. The answer is that Richard would have had his way. Or Elizabeth and her seven daughters would have been slaughtered.

Tina also revealed a remarkable insight about the craft. That when venting all that rage against an acting partner she described some “Five percent of my consciousness that allows me to objectively look at what I am doing.” The idea is knowing the limit of not inflicting physical or emotional harm on a partner. After a performance they can hug and congratulate each other on their fine work.

Yes, this was Tina’s evening. But Nigel was just as remarkable. My goodness. Often he seemed buried in a corner. Stepping aside as Tina did her thing. Before one scene the director asked if she wanted to discuss the situation. Tina said “I have a few words to say.” Nigel groaned and mockingly opened the door as if to step outside for a break. A few words as usual turned into fifteen minutes. She is not very good at editing herself. We saw a preview some months ago that was a compilation of all five acts. It dragged on for about three and a half hours. Believe it or not this was tighter.

When released, however, Nigel sprang into action with ferocious energy. But with a great sense of balance. They are such perfect partners bringing the best out of each other. The love scenes, in particular, are so steamy and bawdy. Like when he grabbed her ample breasts. They seemed like old lovers but it’s all an act. Another testament to their skills.

To be sure Tina has an agenda. If it’s a man’s world Tina is striving for equal time. But she is no strident feminist. She clearly loves and appreciates men. Some of her comments make me blush. But she is also an advocate for fair play and equality.

Discussing the canon she stated that there are about 100 roles for women compared to more than 700 for men. But the point of her thesis is the impact that women have in the plays. And how Shakespeare grew in his understanding and writing for them. That is the arc of her lifelong research that has culminated in these five plays.

Talking this morning with John Douglas Thompson about the Richard III of Olivier he commented that he had deleted some of the women from the film. “He chose not to deal with the women and their impact on him” he said. “That was his choice as an artist.”

In the current staging of Richard III, as Ben Brantley wrote in the New York Times, the play is not dominated by Thompson’s Richard as is so often the case. He described the balance of the cast. And a number of reviewers have commented on the prominence and impact of the strong women in this production. In that regard it was stunning to see Tina and Nigel perform the scene between Richard and Elizabeth. It provided a very different interpretation than Thompson’s.

Perhaps that is the point that Tina is making. And why this company is so spectacular. It is both rooted in the Bard as well as willing to take chances to keep the work fresh and contemporary.

Surely there will be more opportunities to see the five acts of Women of Will. It is an experience that has forever changed me. Thanks Tina. You’re such a mensch.

Coverage of all five performances by Gail Burns