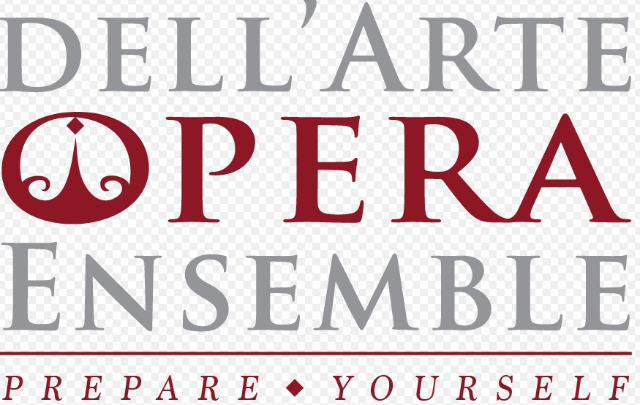 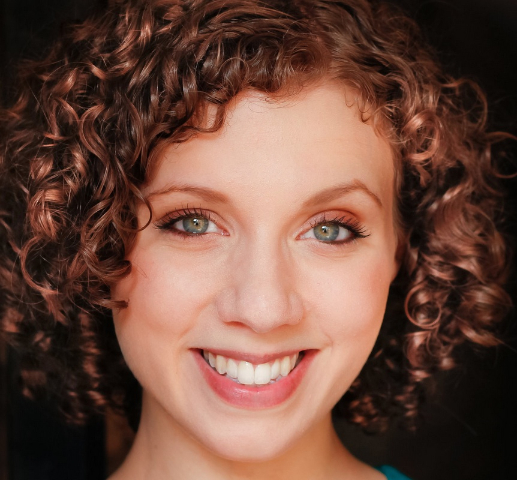 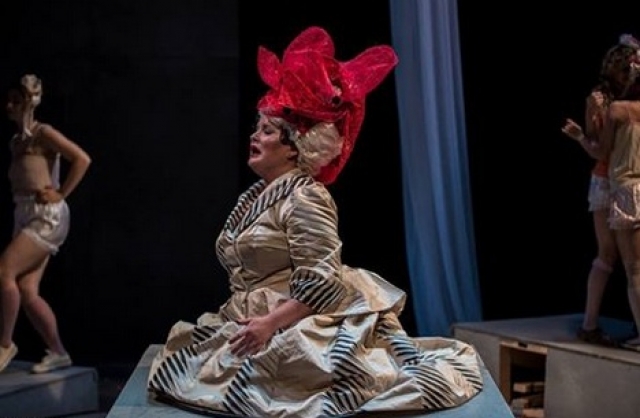 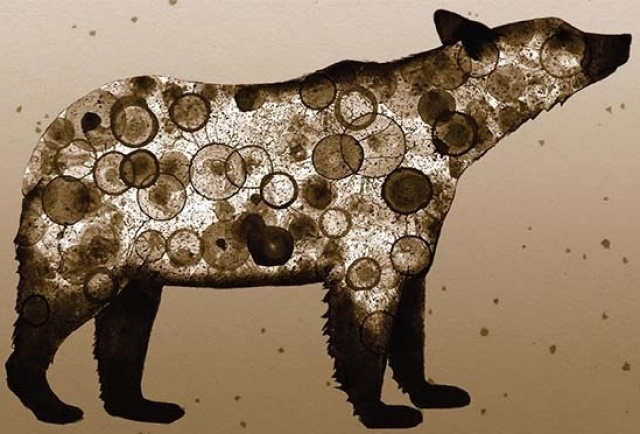 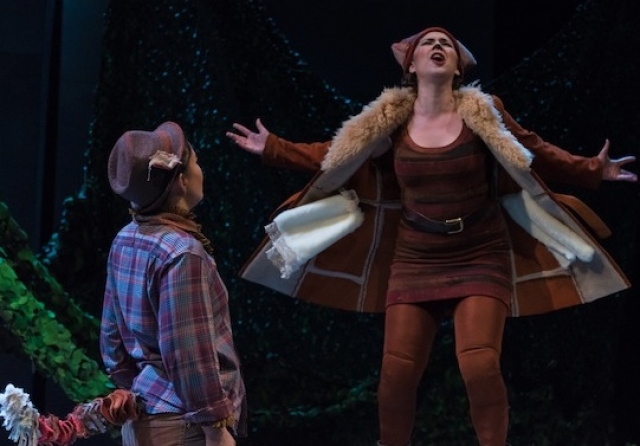 Rachel Hall as the Vixen with her fox,

Separated by almost three hundred the years, the full productions of Dell’Arte’s annual festival look at how two worlds mix and match in the operas La Calisto and The Cunning Vixen.

Both operas have female protagonists who are members of the seemingly less advantaged of two worlds. Both are women. Calisto is human in an alternate universe of Gods. The Cunning Vixen, a four-legged animal is up against the world of the two-legged humans. Both women are loved by men from the higher kingdom.

Dell’Arte, as is their custom, comes up with two supremely talented singing actresses to undertake these complex roles.

Emily Hughes as Calisto, is repelled by the overtures of the King of the Universe, Jove, and sings almost continuously of the devastation he is wreaking havoc on earth because she has rebuffed him. Her voice is both pure and full of complex turns in the decorations. Her stamina is remarkable. Why Jove is attracted is clear.

Mason Jarboe as Jove swaggers, moving gracefully around his baritone as he plots with Mercurio, charming in pink, to capture the human female underling, by, opera being opera, disguise. Taking off his powder blue suit dotted with clouds and donning the huntress’ robes does not take away from his sense of power.

The movement in Calisto captivates. Direction to freeze singers into friezes as the music suggests a moment of reflection, catches the eye and underlines the story. Brittany Goodwin directs with a deep sense of the pleasures of the physical and its merger with music.

A delightful touch is the change of Calisto into a bear, who Jove places after her death as the constellation Ursus among the stars which hang from the sky at the back of the stage.

The cruelty of the world of the Gods is clear as streams dry and dead leaves which cover the land. How silly the Gods are is also clear in gesture and costume. Only Diana, sung by Adria Caffaro both as herself and as Jove in disguise, is humanized by her love for the earthling shepherd, functioning as a proto astronomer, noting the ways of the universe. Padraic Costello sings his heart out in the role.

The composer does not distinguish the two worlds musically, so we are left with both the glorious music and a rich panoply of costumes, sets and characters that Dell’Arte maximizes in production.

Cunning Vixen is Leoš Janácek's homecoming opera, a celebration of his return to rural Moravia. The composer had been writing feuilletons about nature for a few years before his maid handed him a cartoon story from a newspaper. She correctly identified a subject for her boss, who had just returned to the countryside of his youth.

The landscape is a gentle one, not the towering peaks and deep ravines of his other stage works.  Growth of Vixen’s love is moving.  She is a rebel.  "To club, to kill, just because I am a vixen," is repeated six times.  Life is a process of perennial renewal of which death is a part. Janácek found the vixen a perfect example of femininity. Way in advance of his times, he drew a bold creature, whose demise is like Carmen’s, full of defiance.

Rachel Hall in the role of the vixen is a force of nature. She has a gracefully huge voice, which she can use to invoke the vixen's will, and also transform to a coquette.

As the forester whose disappointing marriage has forced him into the arms of a fox, Hyungjoo Eom triumphs. He has a steady voice which he subtly shapes to show his sadness, his enthusiasms and his acceptance of the ways of the world.

Brittany Goodwin stepped into the role of the Dragonfly, in this production directed with spunk by Ashraf Seailam. Her presence helps to underline character with movement.

Small instrumental groups were effectively used to provide orchestration for both operas. Two lutes and a harpsichord provided the right baroque period color for the Cavalli opera. The Dell’Arte Ensemble Festival Orchestra performed the difficult yet beautiful Janacek score perfectly. The woodwinds stood out.

This group, with their commitment to mentoring which yield first rate productions by younger and less experienced talent deserves a wide audience and broad support.