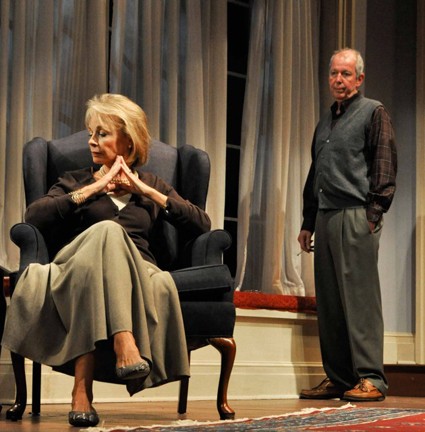 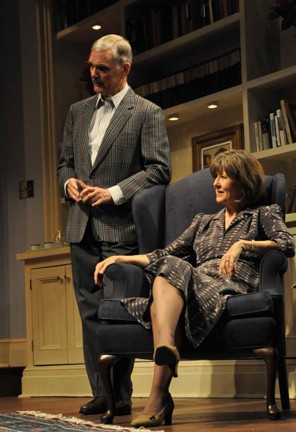 Harry (Keir Dullea) and Edna (Mia Dillon) are the guests who came for dinner and stayed for lunch. 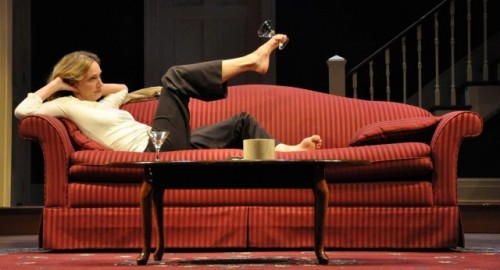 Claire (Lisa Emery) is an amusing but pathetic drunk. 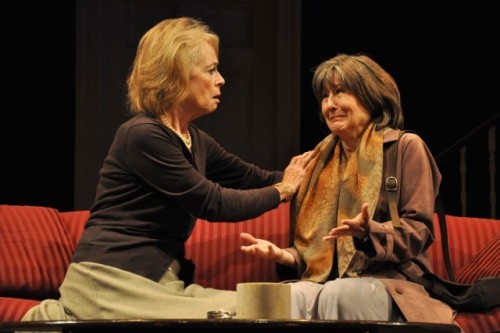 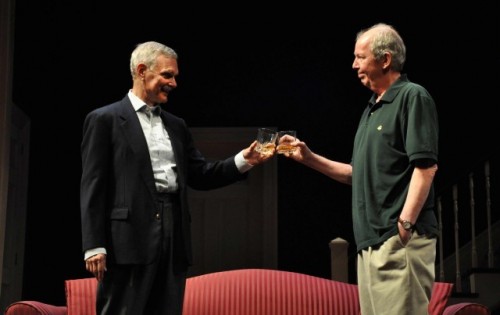 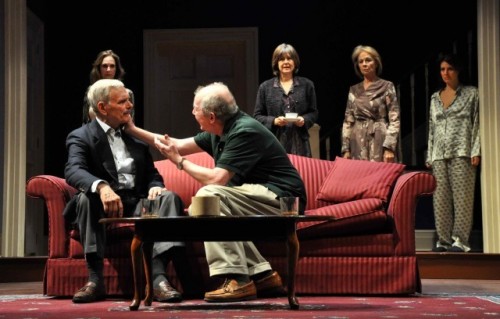 Tobias begs them not to leave.

The set by Wade Laboissonniere conveys the living room of an upscale suburban home. There is a large couch in the center and wing chairs with small tables flanking it. The center section of the stage recedes in perspective. One side has bookcases with leather bound volumes above a counter surface below which is a remarkably well stocked bar. The back wall of the center section is painted an electric blue. There is an outside door on one side and a staircase opposite. It leads to an unseen upper floor that contains the all important four bedrooms.

The bedrooms prove to be critical. One is occupied by Agnes (Maureen Anderman) while another is that of her husband Tobias (Jonathan Hogan). Claire (Lisa Emery) the sister of Agnes still lives in what was their parent’s home. That makes three. The crucial fourth was the bedroom of Julia (Mia Barron) the bratty, self absorbed, troubled daughter of Agnes and Tobias.

A phone call reveals that yet again Julia is returning home because of the breakup of her fourth marriage. Before she can reclaim her room, unexpectedly, Harry (Keir Dullea) and Edna (Mia Dillon), in real life a couple, arrive. They are afraid and spooked out of their home. For reasons we never learn. And have sought refuge in the home of their oldest and closest friends. What at first is temporary soon becomes perhaps permanent as, like the Swiss Family Robinson, they swim back to their shipwrecked home and return with more luggage.

A now tight ship starts to sink with the arrival of the near hysterical Julia. She will, indeed, tip the delicate balance. In a meltdown she will pull a gun and threaten to blow away Edna and Harry as unwelcome “intruders.” She wants them out of “her room.”

The shift of musical bedrooms has caused domestic chaos. The specialty of Albee. In this doubling up Tobias has moved back in with Agnes. It is the first time they have slept together since the death of a son years ago and a decision not to have more children. That  becomes a typically Albeeian plot point. Similarly, in Julia’s bedroom Edna and Harry are sharing a single bed. Edna, good sport that she is, later discloses welcoming sex but Harry backs down. It seems that everyone is frustrated and sexual tension is pervasive but also too messy both physically and mentally to actually do the nasty. Individuals of their social class fornicate only to procreate. Once for each child. It is not viewed as a recreational activity.

In all this domestic turmoil the only one who appears to be oblivious is Claire.  She drowns all emotion at the bottom of a bottle. We would say that she is an alcoholic. She even relates attending an AA meeting but found that she had nothing in common. They were all alcoholics while, as she explains, “I’m just a drunk.”

Truth is they all are. There is an amazing amount of drinking going on in this play. One might say that the characters are drowning in booze. But nobody appears to be intoxicated. There is no evidence of impaired speech or faulty logic. They can drink like fish but remain sharp as tacks through all the Albeeesque infighting.

The drinking starts with breakfast. Harry proposes to Tobias that they share a stiff scotch and a bit of the hair of the dog. It is a signifier of violated protocol that Harry is not only helping himself to the bar but also offering to make drinks for the other occupants of what is not his household. This is a no no. As a house guest you do not help yourself to the bar. You drink only when offered by the host. Albee milks this as a readily familiar metaphor and signifier of all that is terribly wrong with these characters.

Having friends move in unannounced it all too familiar to me and something I could readily identify with.  It happened to me twice. Of course these events occurred years ago when I was a bohemian bachelor with a cavernous basement apartment in Harvard Square. It was where I hosted my famous Alice Cooper party attended by all of Boston’s rock stars. What a hell of a party including Loudon Wainwright attempting to strangle his wife on the kitchen floor as the J. Giles Band looked on. Them was the days.

When my friends arrived, returning from an attempt to establish Harry’s Bar in Ibiza, with count them, two Afghan hounds, they offered a bottle of scotch as a house present. A couple of days later I returned to “my” apartment finding them entertaining “their” friends in “my’ kitchen. They had polished off the bottle of scotch. She said “Oh, by the way, your bird died.” Under circumstances that never became clear.

Well, why am telling you this? Perhaps, because I have lost interest in Albee. His plays are either brilliant or tedious in the manner that they remind me of the darker side of my one life. This proved to be a long evening in three acts that was more tedious than brilliant.

The play is set in the 1960s and is described as reflecting the kind of sterile, hostile environment of his own terrible childhood unloved and an orphan. Edna and Harry are said to be based on his neighbors in this Pulitzer Prize winning play. So much for awards.

Given his hateful and unloved childhood it appears that Albee grew up to be a brilliant, inventive, arrogant and vile human being. This is reflected in his generally miserable characters. By the end of a demanding evening I came to hate everyone on stage. Even though the acting was generally superb. I could applaud the fine performances of the company while detesting the script they brought to life.

There is nothing about these characters that is remotely redeeming. But my particular venom is reserved for that rotten, boring bitch Agnes so wonderfully and enervatingly portrayed by Maureen Anderman. Sure, the pathetic lush Claire was amusing. But drunks often are in their candor and willingness to act the fool. They only embarrass themselves and others while cavorting as the erstwhile life of the party.

The real issue is that they are all wasps with that waspy kind of empty, emotionless, lack of affect. They never seem to feel anything as they talk and talk about nothing and fill the gaps with booze and cheese. I grew up with wasps who never failed to remind me that I was a wop. Screw them and their pain. Lush Life indeed.

They don’t even drink top shelf. At wasp cocktail parties you can drink yourself under the table with Old Mr. Boston Gin or generic vodka. Scotch of course is a blend. How can one even consider sipping anything less than a single malt a minimum of twelve years old. Dewars? Disgusting. But Kappy’s? Creepy.  The gin and tonics were mixed with Cott’s because Schwepps cost a few cents more. For snacks a can of peanuts was served to a room of twenty guests.

As you see Albee has gotten me enraged. Which is his greatness and triumph as an artist. He really manages to piss me off when not boring me to tears. The other point about these characters is that they are all f’n Republicans. Hard core conservatives not like Palin and her Tea Party nuts.

For example while Agnes and Tobias have a nice roof over their heads it is never clear who pays the rent. Like most wasps they never talk about money. It’s just something you have. Working for it seems so common. None of these characters actually have jobs. Or even lives really. Like money they just are.

When Harry and Edna actually decide to leave it rousts Tobias into ersatz real emotion. He tells them to stay. It is where they belong. They are friends and shouldn’t have to ask if they are welcome. Don’t forty years stand for something? Then he blurts out that he doesn’t like Edna. There is nothing likeable about her. Hooray for Harry. He doesn’t love them. But now even more desperately he prevails on them, begs, pleads that they stay. They fill a void that Tobias is discovering for the first time.

Like Edna and Harry my extended house guests eventually just left. I never asked them to leave. One doesn’t do that to friends. Bill and Suzy just took the dogs Suki and Seeta and left. It got rough for both of them after that. Not that I had anything to do with it. They are long dead so I can talk about it. Like me and Hunter, Bill was a gonzo journalist. He stole the word from me while drinking my booze and smoking my dope. Shit, how I miss him. What an inspiration and brilliant son of a bitch.

That was a long time ago. But this play dredged it all up from the watery depths of memory. La recherche du temps perdu.
Ã¯Â»Â¿