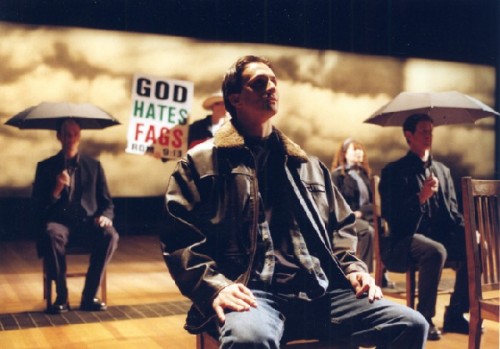 The inaugural season of world-class international theatre programming by ArtsEmerson: The World on Stage kicks off with the Boston debut of The New York-based Tectonic Theater Project, performing two works: The Laramie Project and The Laramie Project: Ten Years Later, by Moisés Kaufman, Leigh Fondakowski, Greg Pierotti, Andy Paris and Stephen Belber. Performances take place at the Cutler Majestic Theatre (219 Tremont St., in Boston’s Theatre District) Sept. 24—Oct. 2, 2010. Tickets, starting at $15, are on sale now at www.artsemerson.org or by phone at 617-824-8000. Shows are appropriate for ages 14 and up.

On Oct. 6, 1998 Matthew Shepard was beaten and left to die tied to a fence in the outskirts of Laramie, Wyoming. Matthew’s murder became a watershed historical moment that highlighted many of the fault lines in our culture. A month after the murder, the members of Tectonic Theater Project set out for Laramie and conducted interviews with more than 200 residents. The resulting play, The Laramie Project, which premiered in 2000, has become one of the most-performed plays in American history, seen by more than 30 million people around the country. It has also been a driving force in the movement to enact the Matthew Shepard and James Byrd, Jr. Hate Crimes Prevention Act, signed into law by President Obama in October 2009.

Ten years after Shepard was murdered, the original Tectonic team returned to Laramie to interview the same people and discover how the community has changed: politically, socially, religiously and educationally. These new interviews have been crafted into an Epilogue to the original. The Epilogue revisits people from the original work, but also includes interviews with convicted killers Aaron J. McKinney and Russell Henderson. It also addresses a revisionist narrative that has emerged since the murder – that Shepard’s death was the result of a robbery gone bad as opposed to a hate crime. On Oct. 12, 2009, the eleventh anniversary of the death of Matthew Shepard, readings of the Epilogue were performed simultaneously in 150 cities in 14 countries. In Boston, it was read by Emerson College students joined by members of the community at the Cutler Majestic Theatre.

This fall’s limited ArtsEmerson engagement will share, for the first time, both the original work and its epilogue before embarking on a national tour. According to ArtsEmerson executive director Rob Orchard, “The opportunity to see these two works together provides a rare and powerful lesson in how memory morphs and history evolves. And, to hear for the first time the words of the incarcerated killers is absolutely chilling. We are indebted to the Tectonic Theatre Project for showing us how theatre connects to culture, heightens awareness and influences public policy on important issues of our time.”

Because The Laramie Project has been so important to many high school and college drama departments, ArtsEmerson invites young people who have been involved in any production of the play at their schools, to attend the Sept. 24 opening night performance for free. Capacity is limited and free tickets will be distributed on a first come, first served basis. To fill out the RSVP form, visit www.artsemerson.org and click on The Laramie Residency link.

ArtsEmerson is planning a series of panel discussions on issues related to The Laramie Project, in the week leading up to the performances. Information about this programming will be available in the coming weeks. In addition, ArtsEmerson is planning a series of Laramie “Dine and Discuss” sessions to take place in between shows, at area restaurants on the four dates when the original and the epilogue are being performed on the same day. Patrons will eat dinner in small groups with prominent civil rights activists and scholars, who will facilitate discussions inspired by the plays. “Dine and Discuss” discussion leaders will be announced in the coming weeks. There is no fee to join a “Dine and Discuss” session, but participants must have tickets to one of the plays and pay for their own meal. Reservations are required, and details, including exact times and locations, are to be announced soon at www.artsemerson.org.

The Laramie Residency, along with Fraulein Maria at The Paramount Mainstage, is part of ArtsEmerson’s opening weekend, Sept. 23—26. Additional programming, including an open house, film, and 10-minute plays by local playwrights, will be announced soon.

ArtsEmerson is the organization established by Emerson College to program the Paramount Mainstage, Cutler Majestic Theatre and other venues at Emerson's Paramount Center. The inaugural season includes over 100 performances of 17 different productions, including world premieres, Boston debuts and works being developed in the new facilities created by Emerson College. ArtsEmerson, under the artistic leadership of Rob Orchard, will give Boston audiences a new level of cultural choice, bringing professional American and international work to its four distinct venues: the beautifully restored 590-seat Paramount Mainstage; the versatile, intimate Paramount Black Box, which can seat up to 150 people; the state-of the art 170-seat Bright Family Screening Room (all located within the new Paramount Center, a cornerstone in the revitalization of downtown Boston); and the beloved, historic 1,186-seat Cutler Majestic Theatre in the heart of the Theatre District, fully restored by Emerson in 2003.

One-year memberships to ArtsEmerson are now being offered at $60. Members get one free ticket, substantial discounts, access to tickets before they go on sale to the general public, and standby seating upgrades. Members will also receive special access to residencies and workshops, designed to offer audiences insights into works in development, and the opportunity to provide feedback. ArtsEmerson offers specially-selected member packages, including All for Fall (six projects starting at $199), Family Pack, Pioneer Pack and Legends Pack. For details about membership and tickets, visit www.artsemerson.org or call 617-824-8000. Packages are designed to give audiences flexibility in designing their own season.

ArtsEmerson: The World on Stage is a new arts organization established by Emerson College, committed to presenting legendary and pioneering artists from throughout the world. ArtsEmerson programs include culturally enriching theatre, film and music, all presented in Emerson’s historic and new venues in the heart of Boston’s Theatre District: the Cutler Majestic Theatre, the Paramount Mainstage, an intimate Black Box theatre, and the Bright Family Screening Room (the latter three all located within the  Paramount Center). Much of the work of ArtsEmerson will evolve out of periodic, multi-year artist residencies at the College designed to facilitate the creation of new work and to provide opportunities for students, faculty and the community to engage in the creative process, with access to some of the most distinguished and distinct artists working today. For more information, visit www.artsemerson.org


On sale now at ArtsEmerson