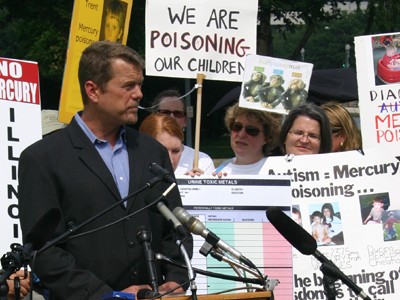 Dr. Wakefield has been the center of the vaccine controversy.

Poor former Dr. Andrew Wakefield, the medical establishment praised him effusively when he uncovered links between autism and a particular type of gut inflammation.  When he noticed that most sufferers had also had this shot and that shot, he suddenly became pariah of pariahs.  Eventually, even his license to practice medicine was taken away.  It raises the question:  Why would he lie, in view of the consequences of saying what he said?

Today’s decision-makers find certain ideas, particularly ones they can just barely grasp, extremely progressive and appealing.  One example is the Theory of Comparative Advantage, their rationale for all these “free trade” agreements that are actually so damaging.  Another is Herd Immunity, which is a social good, but not if it’s attained at the cost of vast numbers of neurological and developmental disorders.  Never mind, the interests get aligned, and then anyone offering criticism must be unable to understand the herd immunity concept, must be some kind of superstitious freak.

The nuts and bolts of scientific inquiry are very much divided on these subjects.  See Dr. Deth on Aluminum and autism for some interesting point-by-points.  The concerns about all these adjuvant-containing shots would be very real, even if they were without foundation—and it’s clear enough to me that they are not without foundation.

A new effective and safe adjuvant would alleviate so many concerns, and help to bring us the blessings of herd immunity, and it would cost only dozens of millions to develop, but manufacturers apparently are interested in sales and profits, to the exclusion of product improvement.

There was no reason for former Dr. Wakefield to lie, and he didn’t.  Aluminum toxicity is capable of doing real damage.