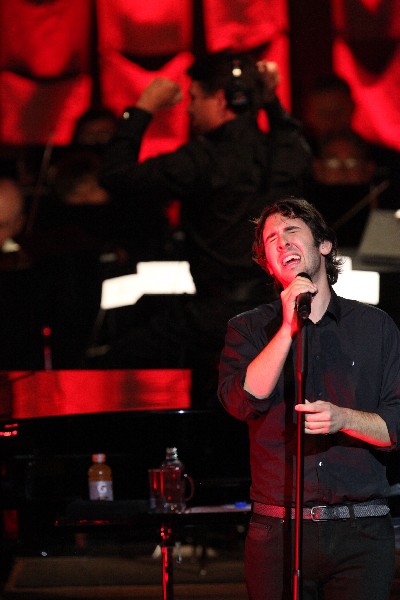 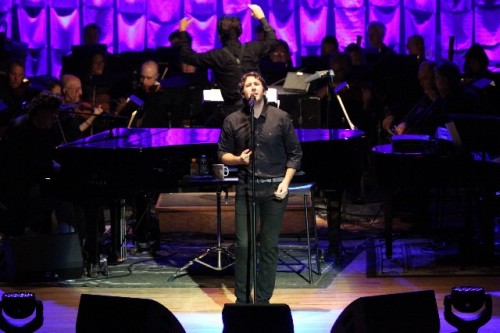 Josh Groban and Conductor Keith Lockhart of the Boston Pops

If I were a woman I would be in love with Josh Groban.

Groban is polite, funny, quick-witted, good looking and an entertainer with a voice that Andrea Bocelli would marvel at.

Ending his east coast tour at Tanglewood, Groban wowed the house with a voice that is like none other. His proud parents were in the audience to support their 33 year old son and his ‘Love for Tanglewood’.

He last performed at Tanglewood in 2003, much too long ago, said the superstar.

Like local favorite, Arlo Guthrie, Groban is a master storyteller. Each song has a story or long antidote explaining why he chose the melody for the evening. Groban humorously explains his reasons, makes the audience laugh and goes directly at the jugular with his song.

His‘ magnetic force ‘ made the Shed feel like a small, intimate Roman nightclub. I mention Rome because his voice level is raised several octaves, to the trained ear, when he sings his melodies in Italian.

Love songs sung in Italian, with a voice like Groban’s, certainly make him a disciple of Andrea Bocelli. Mr. Grogan is blessed with an incredible voice that mesmerizes the audience. It does not matter what language he sings in—his voice captivates the soul of those who listen. The rendition of ‘Per Te’ and ‘Alla Luce del Sole’ capture the essence of what  Groban is about.

Backed by Conductor Keith Lockhart and the Boston Pops Esplanade Orchestra, Groban belted out pop classics in such a way that the songs had a new meaning and a new sound. ‘Starry, Starry Night’ (Vincent), ‘I Believe When I Fall In Love It Will Be Forever’ and ‘Play Me’ were not the versions we grew up with. Don McLean, Stevie Wonder and Neil Diamond were given new life with their classic tunes.

Groban touched on his friend, Robin Williams' passing, before ending the show, as Tony Bennett characteristically does, with the classic ‘Smile’.

And that is exactly what the audience did on their way home.