American Jazz Master Flat Out at 88 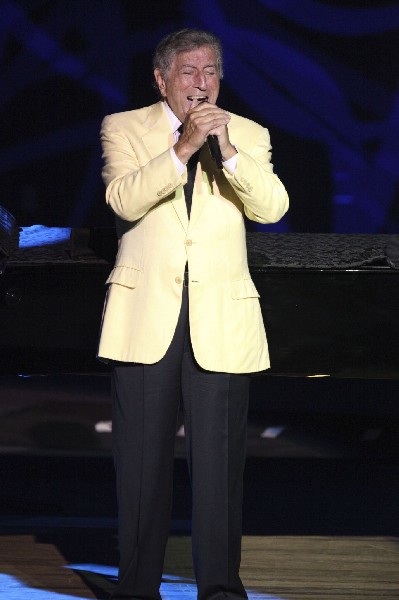 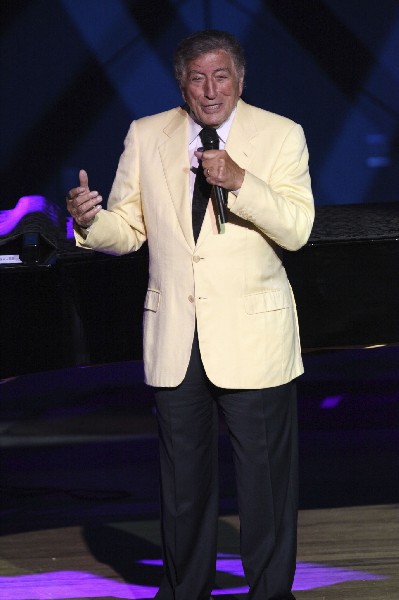 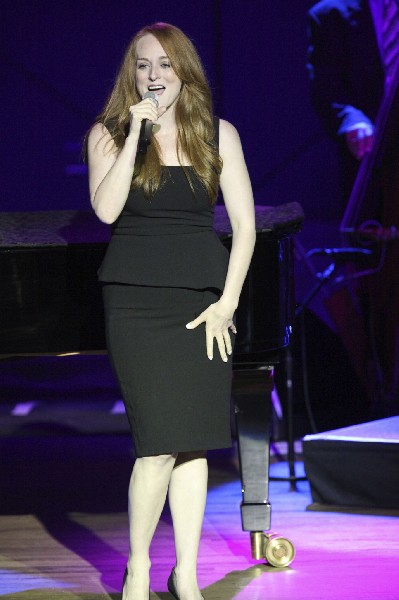 Antonia opened for her father. Scott. 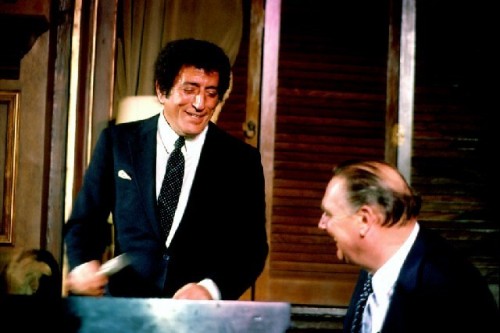 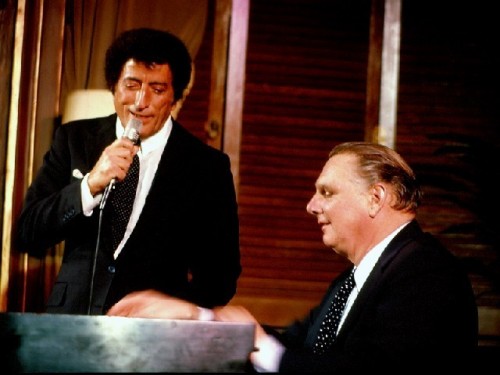 Over the Labor Day weekend there was a sublime ending to the Tanglewood Season with a galvanic and mesmerizing performance by the 88-year-old jazz master Tony Bennett. He last performed in the Berkshires in 2009. On this occasion he was accompanied by his daughter Antonia who opened with a 20 minute set.

While most dudes his age are taking it easy today Tony is off to Europe for a tour.

In 2006 he released Duets followed by Duets II in 2011. Tony Bennett & Lady Gaga: Cheek to Cheek LIVE will be released by Streamline/Columbia/Interscope in September and shown on Public Television's Great Performances in October. In his Duets series they previously recorded "Lady Is a Tramp."

Duets II was his first No. 1 album, selling 179,000 copies. It won a Grammy for best traditional/pop album and earned another Grammy for his duet with the late Amy Winehouse. His Duets were presented on PBS.

Now in his late 80's begs the question of can he still sing?

With his signature rusty pipes the answer has always been yes and no.

The instrument of his voice hardly compares to a Stradivarius. It has a husky, crusted resonance.

From the get go, however, Bennett perfected a unique style and manner of interpreting standards.

While there are artists with great voices capable of hitting crystal clear high notes that has never been his approach.

Bennett is the vocal equivalent of a knuckleball pitcher in baseball. The more fatigued and aged their arms the better they get. They have typical careers into their forties when those who throw high heat have long since faded to play golf in Florida.

When Bennett pitches a song to the audience the lines float out at us. They bob and weave, dip and swoop in an absorbing, fascinating, unpredictable path, first to our ears, then our guts and senses. In a range of material from swing tunes to ballads he can take it down to an intimate whisper, drawing us in and tugging at our heart strings, then finish with an astonishing belt and flourish. Standards are sustained until he has wrung every shred of emotion from the lyrics.

Take, for example, his signature “I Left My Heart in San Francisco.” It’s a tune he has presented a zillion times. But yesterday he sang it as if he were just feeling it for the first time. I fought back tears of overwhelming emotion when he rendered the line “I saw you standing there.” Right now I am getting chills just recalling such a riveting moment.

Back in the day, I got to know a lot of the greatest jazz and cabaret artists through intimate club dates. Anita O’Day held me prisoner during gigs when I attended rehearsals and chauffeured her around to do errands. I learned so much from watching her rehearse. Carmen McCrae taught me about phrasing and how to sell a song. There were lessons on the craft from Madam Bricktop to Blossom Dearie and Annie Ross.

During a broadcast for PBS hosted by my friend Ron Della Chiesa I was inches away when Tony performed with pianist Dave McKenna at the Copley Plaza Hotel.

The greatest singers, like Billie Holiday and Nina Simone, make you feel the poetry and pain of every word of the lyrics.

When it comes to phrasing and punctuating a tune Tony has always been in a class by himself. Even Sinatra, the Chairman of the Board, acknowledged Bennett as the greatest jazz singer of his generation.

That’s still amazingly true after all these years.

There were hard times. Lots of reasons why he shouldn’t still be on stage.

After the Beatles jazz took a dive.

A lot of guys went down for  the full count and never got up off the canvas.

It’s painful to hear the over produced albums of the 1950s and 1960s. To grab the fading popular audience record companies put singers in front of large studio orchestras often with a section of corny strings.

Now and then the great ones recorded with Basie. That was a band that could really swing behind a singer.  Tony was so blessed with his Basie sessions.

A master like Bennett, however, is outstanding in a simple setting. Yes, he can swing with a big band, but he is best heard with few distractions. He was just amazing with a great pianist like McKenna and the recordings with Bill Evans are masterpieces. They drove a spike into the heart of the bullshit about white jazz artists. Miles loved Evans.

We often heard Sargent in pickup bands for Boston clubs backing whoever came through town. In another era he would be a star. We were thrilled when Tony brought him up front to trade licks. Yet again we were awed by his awesome chops on a full bodied guitar. Unlike flashy rock guitarists his playing is about drawing out the nuances of the melody to complement the lyrics. I would love to hear an album of their Duets. There was also ample room for Renzi to cut loose.

In the best cabaret tradition Wood and Jones were notable for remaining just under Bennett. They put down a solid foundation for Tony to swing and lay back on. Again it’s a different approach and significantly, while sharply and accurately accenting every beat, Jones was content to stay out of the spotlight and never took a solo.

In the years since we last saw him it was inevitable to wonder what he still had in the tank.

There was a straight up set by Antonia that started at 2:30- “Taking a Chance on Love” Brenda Lee’s “You Are Always on My Mind” a song dedicated to her Dad “You’re a Lucky Guy” Noel Coward’s “Sail Away” “From This Moment On” ending at 2:46. She would return for a duet of a Sondheim tune.

Bennett came on to a Standing O and delivered a stunning set that ended just shy of 4 PM. He opened with a plea to the audience “Let Someone Believe in You.”

Following with “Maybe This Time” there was no doubt that he was in full command when he belted out a strong finish. It was also our first exposure to Renzi as Bennett stepped back and featured the pianist. How poignant with the lines “Everybody loves a winner” “Nobody love me” “Maybe this time I’ll win.”

The lyrics resonate with the life experience of one who has endured adversity. It’s something that younger artists just have to evolve into. With such phenomenal knowledge Bennett is at his very best.

He picked up the tempo to swing with “I Got Rhythm.” There were fine runs by Sargent.

Some twenty minutes into the set he brought out Antonia for a duet of Sondheim’s “Old Friends.” She made some dance moves which Tony gamely kept up with executing an amazingly deft twirl which evoked knowing appreciation from a mostly gray, Shed audience.

There was a nice beat to “Stepin Out With My Baby” that featured picking by the bass player Wood.

Sargent moved out front as Bennett again explored the melancholy ebb and flow of love with the lyrics “Love is tearful or it's gay/ It's a problem or it's play/ It's a heartache either way/ But beautiful.” It’s among the songs he recorded with Evans. Responding to the overwhelming appreciation of the audience he blew us a kiss.

He had been on stage for a half hour when he promised “The Best Is Yet to Come” and delivered.

Taking it down to a whisper he crooned “The Way You Look Tonight.” From that soft middle passage he raised up a mighty roar finishing with the repeated refrain “Tonight, Tonight, Tonight.”

In one of few asides he told us “I’ve been singing now for 50 years.” Then corrected himself “No, honestly, 60.” Then launched into “Just in Time.”

Back in 1950 his first recording was the 1933 song “Boulevard of Broken Dreams.” He demonstrated why it endures.

While there is a lot of melancholy in Bennett’s standards he reflected on “The Good Life.” He recorded it recently in a duet with Lady Gaga. He plugged their soon to be released CD and urged us to buy it because “She needs the money.” It is clear that he deeply respects her as an artist.

Again he became reflective of lost love with “Long Ago and Far Away.” He was at his story telling, articulate best with “Shadow of Your Smile.” Then a saloon song borrowed from Sinatra “So set em up Joe, It’s one for my baby and one more for the road.” He moved on with “For Once in My Life.”

Now fifty minutes into the set he wound into the home stretch. It is incredible that an elderly singer of standards has topped the charts but as he explained “I’m Old Fashioned.” Hey, me too.

It was time to unleash "San Francisco.” It was met with applause and approval by the utterly charmed audience.

How do you follow that? With the Gershwins’ “Who Cares.”

The audience begged for more. By now everyone was on their feet.

Tony utterly owned us when he told of getting a nice note from the composer of a song he had given new life to in a recording. “It was signed Charlie Chaplin.”

He closed yet again with the perennial “Smile.”

The near to capacity audience left doing exactly that.

What an incredible performance. It just don’t get better.