Clemente: The Legend of 21 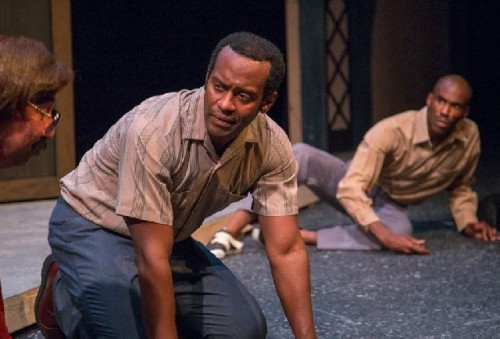 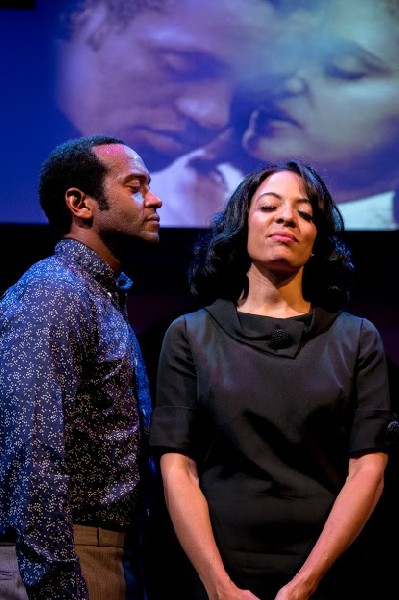 Clemente and Vera, the love of his life. 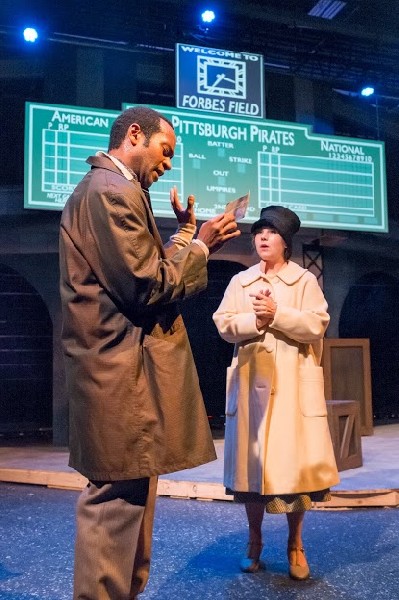 A fan gets autographs for her team of seven players called DC 7. 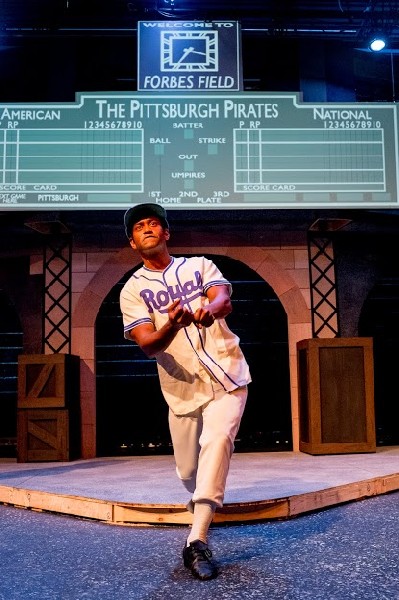 Clemente: The Legend of 21 is a moving, lively and thoughtful reminder that we never know when our time is up.   Luis Caballero has been working on the show for a while. It played at the Puerto Rican Traveling Theatre in New York in 2011 and goes on to Pittsburgh after its current run in Chicago.

Modesto Lacén is magnetic as Clemente, emanating the warmth and humor of this highly unusual professional athlete who set the standard for performance on the field and off.

The texture of life growing up in rural Puerto Rico, the natural draw of the game of baseball, Clemente’s passion for the game and his talent in development are woven into an unusual fabric of local music, family life and street ball.

Aaron Benham is credited with the music’s adaptation and it is canned in this production. It was enjoyable and felt just right to accompany and sometimes lead the story.  The music gives color to the set and provides ample beats and tunes for choreography, which moves seamlessly out of the actors more formal dramatic scenes into dance. The blending of music, of video projections of rural Puerto Rico, ball fields and sugar cane offer other gratifying elements.

Race does not enter this story until Clemente is recruited for the big time in the US. He first plays for Montreal, but ‘plays’ is not quite the word. He is benched and therefore subject to seduction by the Pittsburgh Pirates who promise that he will play.

And play he did. From 1955 to 1972 he was the indispensable outfielder for the team. He made records, a record 3000 at bats at the end. He was an MVP for the season and for a World Series and in All Star games.

Six months after his death in a tragic plane crash while he was on a humanitarian mission in December of 1972, Clemente was given a time exception by the professional baseball writers who nominated him for the Hall of Fame.  He received 92 % of their vote.

Clemente was an exemplary human being and that is the problem with this play. Where does the playwright draw an arc?  From good to good and better to better?   Playwright Caballero in this iteration has chosen to pivot off the idea that we never know when our time will be up. It doesn’t quite work theatrically.

A tantalizing scene in which Clemente and a teammate are attacked by white cops comes and goes too quickly. Exactly what was Clemente’s position on race? His early life was different than that of American blacks who grow up learning to endure racial barbs from the cradle.

It is the arc of the story that has not yet been solved. “42” was an American African American who came to the game of baseball having faced many of the racial issues that were disturbing in his own life growing up.

This is not true of Clemente who grew up in Puerto Rico where most people are a shade of dark. His home life and his community life supported his talent.   Obstacles did not arise until he got to America and Canada.

He came onto a fierce team that was heavily black. Ritchie Hebner, the white third baseman, used to say that he should have played ice hockey where there were more men like him. (White).

Many men who played with Clemente – Al Oliver, Willie Stargell and Dock Ellis among them, had had bitter racial experiences before they ever started playing ball.

Was Clemente able to teach them anything? Was his bright, hopeful spirit in the face of adversity an example? When he learned English, was he able to lead off the field as well as on?

Lorraine Velez is a lovely Vera Clemente, girlfriend and then wife. She does not have the bight and fight of Rachel Robinson who was a riveter like Rosie during the Second World War. But Vera's love and her continual support clearly re-enforce the strength Clemente has already developed.  She has two arias which she sings with a lovely lilt.

Ramon Martinez, played by Ricardo Puente, was a Cuban sportscaster who became a close friend.  He is a nettle and a prod.

In addition to the playful performances of Clemente and his brother as young boys, the dignified and humane portraits of his parents as they are drawn by Willie Denton and Xiomara Rodriguez make clear where Clemente got his superb stuff.

Clemente is an engrossing and enchanting evening of theatre.  We look forward to the show as it develops.

Note: In the interest of full disclosure, this writer spent a season with the Pittsburgh Pirates while they were still mourning Clemente's death.