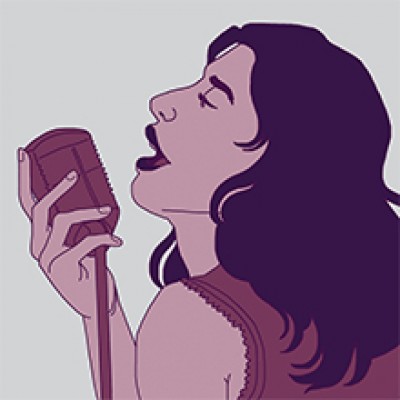 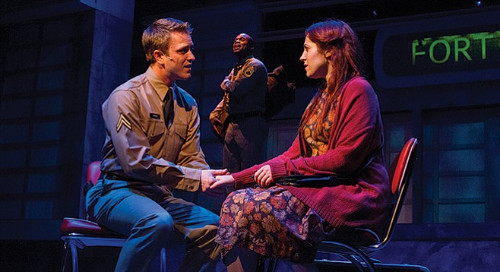 Forty years ago San Diego REPertory Theatre co-founders Sam Woodhouse and D.W. Jacobs opened the doors of their theatre whose Mission Statement in part read ”… produce intimate, exotic, and provocative theatre that celebrates the multiple voices of our region and feeds the curious soul.”

Under the steadfast forty-year leadership of Sam Woodhouse, this vitally important urban theatrical space in Horton Plaza, has indeed fed the many curious souls of its audiences as well as its actors, directors, playwrights and creative artists.

Tesori, winner of the 2014 Tony for Best Musical (‘Fun Home’), delivers a haunting musical score with poignant lyrics to match from lyricist Crawley, however Crawley’s libretto/story doesn’t quite match the ambition of the creative team. His script is a very simplistic, down-home, country approach as it tells the story of a young, disfigured woman who embarks on a journey by bus from her farm in North Carolina, all the way to Tulsa, in order to be “healed” by a Televangelist, only to be crushed once again when she realizes there has been no change in her outward appearance.

Losing her mother to cancer at 13, growing up with a father who loves her but who can’t seem to understand or come to grips with the unfairness of the world that he and his daughter live in is compelling indeed, but there is something naïve and a little too simplistic in the unfolding of Violet’s story by librettist Crawley.

It’s not a linear story (not that it has to be). In “Violet”, the actors frequently break the fourth wall, and employ the instant flashback technique where the young version and the grownup version of Violet are on stage simultaneously singing and acting together; then they go forward to the present and the narrative moves on. The convention merely sharpens our focus and concentration, but it jars slightly at first.

One distraction that does jar my credulity concerns is the reference to “a disfiguring scar” on Violet’s face; the result of an accident when her father’s axe slipped while cutting wood, and struck her. All on-stage characters appear to react or recoil at the sight of it. It’s been a source of Violet’s teasing by classmates, which accounts for her on-going self-image and low esteem problems. Why then is there no visible evidence of a scar on Violet’s face that the audience can see? It’s a key character element that drives all of Violet’s self-conscious behavior and her outlook on life. I’m just wondering that’s all…

Having said all of the above, the actors in “Violet”, however, are outstanding in their performances. A non-scarred and lovely Hannah Corrigan, as grown-up Violet, sports a powerful set of pipes with a wide vocal range and is sweetly and convincingly portrayed. A poised and confident 13 year-old Katelyn Katz as young Violet, holds her own with all of the adult performers in her scenes.

Rhett George as Flick, an African American army Sargent that Violet meets on her bus trip to Tulsa delivers a strong, compelling and poignant performance both as an actor and as a singer. His army buddy Monty played by Jacob Caltrider is a G.I. who plays all his female relationships safely – he’s only only interested in one-night stands – also has a nice singing voice. The two and three-part harmony numbers by the principals is nicely done thanks to Tesori’s appealing sounding score under the musical direction of talented Korrie Palliotto, who did such as fabulous job on “Everybody’s Talkin’: The music of Harry Nilsson” that was recently heard and seen at the REP.

Strong support also comes from Melinda Gilb as the old lady; Jason Maddy as Violet’s conflicted and guilt-ridden father; Jason Heil as the Preacher and local favorite Kurt Norby playing several characters as does Bryan Banville are all first rate.

If energy or electricity is in short supply during the heatwaves cooking the San Diego area of late, I suggest we all tap into the electric and high-octane performances and energy generated by cast members Anise Ritchie as a Music Hall singer, and Tanika Baptiste as Lula Buffington, respectively. They generate enough energy to light half of San Diego with the Gospel singing number led by Baptiste and is the wildest 11 0’clock spot I’ve seen in a long time. It brought down the house at the performance I attended. It rocked!

Out of the 23 musical numbers featured in this nicely-paced musical, I feel there about six songs that really hit home: the poignant ‘Water in the Tank’, by the two violets; the upbeat ditty about gambling called ‘Luck of the Draw’ by Young Vi, her father, and Violet; the serio-comical ‘A Healing Touch’ by the Preacher, Young Vi, the Gospel Choir, and Violet, also the tender and sweet ‘Let It Sing’ by Flick to Violet, plus the moving ‘Hard to Say Goodbye’ by Flick and Violet, and of course, the high octane number ‘Raise Me Up’ performed to the hilt by Lula Buffington and the Gospel Choir.

The ensemble cast of mainly Equity performers, make this touching 90 minute, no intermission production about the fragility of life and the quixotic-like hopes and dreams required to cope with its many difficult choices, a production not to be missed.

“Violet”, the musical, performs at San Diego Repertory Theatre on the Lyceum Stage and runs through to September 13, 2015.