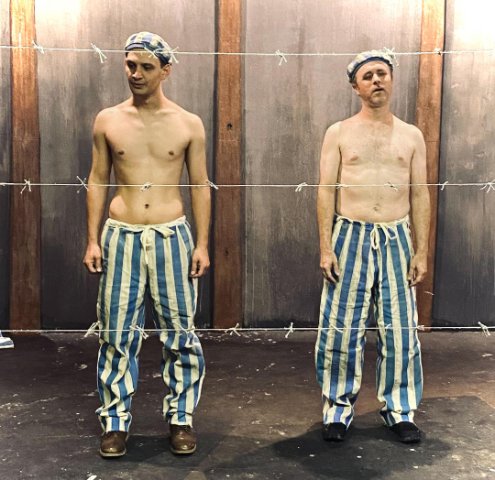 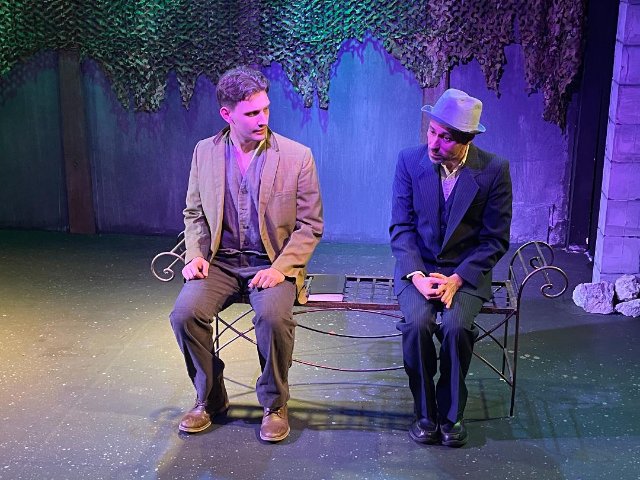 Photo by Preston Bircher Max (Matthew Salas) tries to get a point across to Rudy (Ben Shaevitz) in a co-production of the historical play, “Bent.” 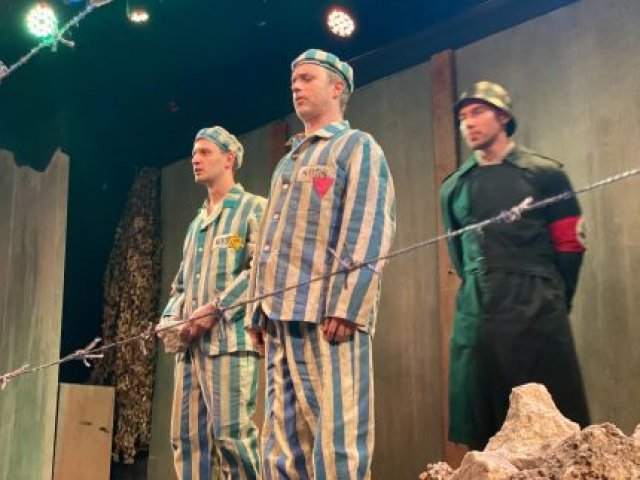 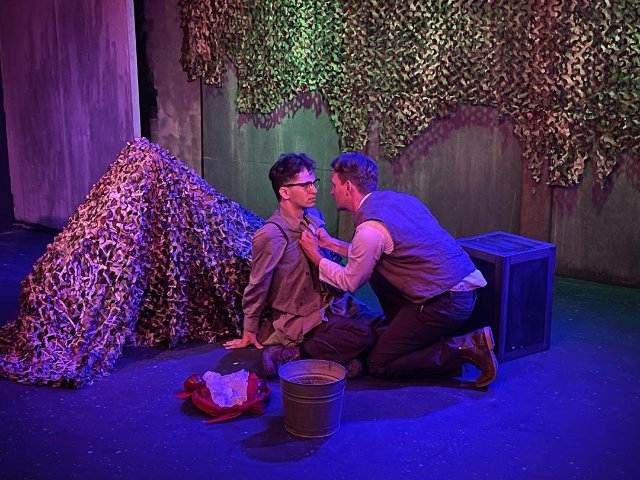 Photo by Preston Bircher Max (Matthew Salas) tries to get a point across to Rudy (Ben Shaevitz) in a co-production of the historical play, “Bent.”

Controversy has followed Bent since its first reading in 1978. The play, which debuted in 1979, suggests that Jews, compared with homosexuals, received less harsh treatment at the Dachau concentration camp, the first one the Nazis built.

In particular, your blood may boil when Max, Bent’s central character, decides to ask for a Jewish star rather than a pink triangle. Apparently, he thinks that the Nazis will deal with him less severely if they think he is Jewish and straight rather than gay. During Nazi Germany, the pink triangle identified homosexuals, while yellow stars identified Jewish people.

While Bent may offend and outrage, its importance is undeniable. Specifically, before Sherman wrote Bent, the world knew little to nothing about Nazis’ treatment of gays before and during World War II. The play enlightened audiences about the topic starting in 1978, when Bent premiered off-Broadway. Following the play’s debut off-Broadway, productions followed in London and on Broadway. How much of Bent is true is a matter for historians to decide.

The piece is not perfect. Still, the play’s strong dramatic tension and timely as well as timeless messages about the strength of the human spirit, honesty, tolerance, love, and human dignity made Bent a success. As a matter of fact, Bent received a Tony Award nomination for “Best Play” in 1980. In addition, Sherman’s piece earned a Pulitzer Prize nomination in 1980.

Bent’s title stems from a slang word for homosexuals in some European countries. The play, set from 1934-1936, opens on the first morning after the start of the Night of the Long Knives. During this infamous period in gay history, Nazi secret police murdered homosexual commander Ernst Rohm and his associates. Also, the Nazis launched Hitler’s reign of terror. It targeted, among others, Jews, gypsies, political opponents, and gays.

In Bent, Max is a gay, promiscuous “wheeler-dealer.” He drinks, takes drugs, and seduces men he picks up from a nearby nightclub. One night, Max and his lover, Rudy, unknowingly pick up a man on the Nazis’ wanted list. This action forces Max and Rudy to flee Berlin and live underground. Ultimately, authorities arrest the two men and send them to Dachau. Enroute, a Nazi official murders Rudy. But,  Max survives thanks to “pink triangle” prisoner, Horst. He advises Max on how to behave in order to survive.

Once in Dachau, Max makes a deal with Nazi authorities to wear a Jewish star. With that, he avoids the pink triangle, the badge of supposedly the “lowest” at the time, the homosexual. In addition, Max arranges for Horst to be on his work detail. It involves carrying rocks from one pile to another and back again. Supposedly, through this kind of pointless yet tiring work, the Nazis hoped to drive the prisoners mad. Meanwhile, Max and Horst try to express their feelings for each other in this stifling environment. It is one in which authorities severely restrict the prisoners’ movements. Can Max and Horst survive their situation?

While Bent is gripping theater at times, some incidents are, to put it mildly, hard to believe or stomach. For instance, Max convinces Nazi officials that he is straight by having intercourse with the corpse of a young girl in front of the guards. And is it plausible that guards would “give” Max a yellow star just because he asked for one?

To hear Max talk about the yellow star like that, it sounds like something valuable and much-coveted.

At another point in the play, Horst develops a bad cough. Then, apparently, Max is able to convince one of the Nazi officials to give him medicine for Horst. To get the medicine, Max has to “blow” an SS captain. What is the likelihood of that happening?

Speaking of likelihoods and chances, some may feel that Bent is a dated piece because of all the strides society has made in establishing gay rights. “What is the likelihood of another holocaust?” someone may ask. But in today’s tense, divisive, and uncertain world, a disturbing number of verbal and physical attacks against minority groups are occurring with frightening regularity. With this in mind, Bent serves as a cautionary tale. Specifically, it warns us against thinking that the unthinkable will never happen again.

Plays such as Bent can also put things into perspective. When we feel bad because, for instance, we did not achieve as high a rank as someone else, Sherman’s piece can remind us that our situation could be so much worse…even deadly.

In addition, Bent puts your mind to work. You cannot help but think how you would react if you were in Max or Horst’s position.

Also, due to the pandemic, when you watch Bent today, you do so with a renewed sense of appreciation for the importance of human contact, physical or otherwise. Specifically, you sympathize with Max and Horst when they imagine themselves making love to each other, knowing that guards are watching their every move.

With the actors’ eyes shut in concentration, and a convincing sound of intense longing escaping their lips, you keenly sense in this co-production how starved the characters are for connection.

Max is not a particularly likable character. For example, he can be selfish, dishonest, and he uses people. But Salas makes us care about the man. And the actor undergoes a convincing transformation from a decadent, directionless individual to a caring, loving person.

Opposite Salas’s loud and intense Max, Seth Trucks gives us an understated, yet suffering Horst. More specifically, Trucks plays his character with believable resignation. Trucks’ Horst seems like a man who long ago radically accepted his reality as a prisoner of the Nazis.

Other actors who shine in this co-production include Jesus Reyna as a creepy, teasing, menacing Nazi guard. In particular, he speaks softly, even playfully, with icy amusement in his voice.

Curiously, Ben Shaevitz seems oddly carefree and indifferent as Rudy, a naïve young man who is totally devoted to Max.

John Santos, the production’s co-producer, usually plays Max’s “Uncle Freddy.” But for the reviewed performance, the co-production’s assistant director, Chris Ruggere, stepped into the role. “Uncle Freddy” is gay. However, he pretends to be straight in order to remain in favor with his wealthy family, who disowned Max due to his sexual orientation. Ruggere, wearing a hat, played the uncle appropriately as somebody who is clearly hiding something.

Under Larry Buzzeo’s direction, the production flows smoothly up until the end, when it drags. During the latter scenes of the play, Max and Horst move basically in a straight line, only 20 feet or so back and forth as they move rocks from one pile to another. The fact that the action drags during these scenes is not a bad thing. Rather, it gives us a sense of the monotony that Max and Horst must experience as they perform this seemingly senseless task over and over again, daily.

As you watch Max and Horst move the rocks back and forth, you might picture an absurd, senseless existence – kind of like the one Samuel Beckett depicts in his existential masterpiece, Waiting for Godot. Surely, as Max and Horst perform their repetitious task, they must wonder whether someone, anyone, will ever come for them. While they might be in less danger than other prisoners, their lives have become pointless, like the tramps in Godot.

During the scenes featuring Max and Horst moving back and forth, lighting designer Preston Bircher’s work shines. Bright, intense lighting suggests a hot, blazing sun baking these characters as they perform repetitious, tiring labor. Bircher’s lighting turns blue as summer gives way to winter. Coupled with sound designer David Hart’s seemingly real noises, which include a howling wind, and stage fog, the scene in front of us looks and sounds like an unforgiving, cold winter.

Just as the sound and lighting design features variety, Sherman’s script is diverse. While an almost constant sense of danger suffuses the second act, a sensuous aura surrounds act one.

In this co-production, the action begins before the “curtain” rises. Performers are in place before the official start. They include a mime and an individual with a dark mask. We are in a decadent nightclub similar to Cabaret’s Kit Kat Klub. We, the audience, “portray” guests at Greta’s nightclub. The performers interact with us, connecting our reality with the play’s reality. By making this directorial choice, Buzzeo reinforces the play’s relevance to our world today.

Buzzeo not only directs and acts (as an effeminate Greta), but he has designed the set and period costumes. The sparse, yet appropriate set design features two grey walls upstage, reinforcing the material’s darkness. A tall, dark fence serves a similar purpose. In addition, the set includes period details.

Credit Empire Stage, as well as Buzzeo and Santos’s new company, ArtBuzz Theatrics, for mounting a controversial, yet important play. Like Cabaret, it can remind us about the dangers of complacency in the face of evil.