British Comedy Based On 18th Century Italian One 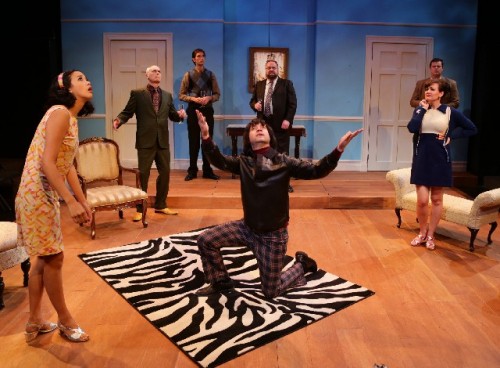 Cast of One Man, Two Govnors 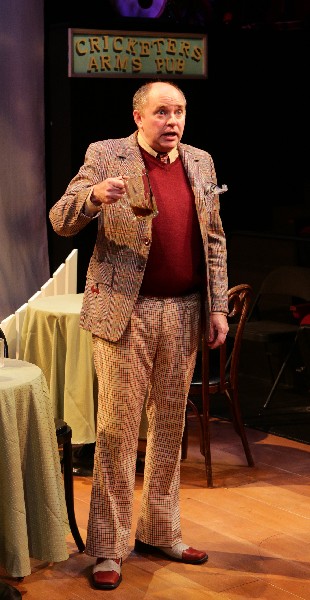 Neil A. Casey as Francis Henshall 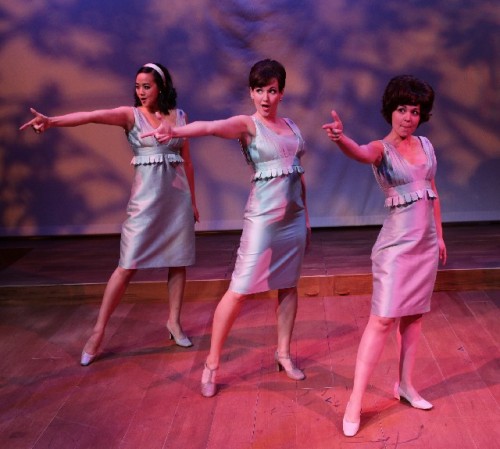 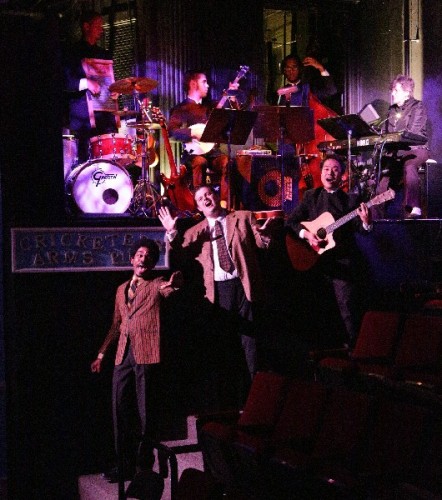 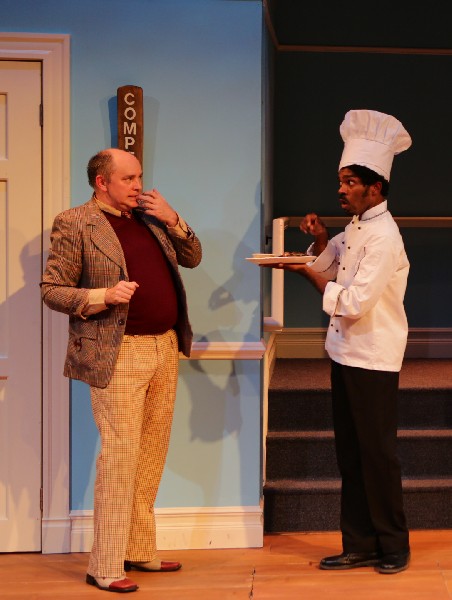 The Lyric Stage Company's One Man, Two Govnors is a show that tries to integrate various aspects of English Music Hall along with the trappings of Commedia Dell'arte. Set in a chorus of occasional music and pratfalls, there are the various Commedia character types with British accents--the snobbish bore, the fool, the old man, etc. and the masks of mystery, hidden identities and eventual unveiling.

There is both good and bad in this production.

First, some good things: a number of the performers were quite good. Dale Place was terrific as a proper English villain as Charlie “The Duck” Clench. He was virtually Cockney note perfect. Larry Coen as pompous barister Harry Dangle was Latin-spouting and wordsmithing in full froth. And Aimee Doherty's great Dolly was beautifully lusty and all business.

John Gavin's little old fiesty man was great. His character is in the tradition of many English comedies that have the old codger as a counterpoint to youthful exhuberance. His portrayal is like an old clock that keeps on ticking while giving out appropriate lickings.

Creative symbolism is good, but this show seemed to be narrative lite rather than cleverly pithy. The story was in need of stronger delination or just better pacing. Unfortunately, this was not helped by some of the characterizations or weak stagecraft.

The bad includes the main character and several other production misses. Neil A. Casey's Francis Henshall is too much tongue in cheek and wink, wink, nudge, nudge who's your mother? while gracelessly chewing the minimalist scenery.

Sometimes a wonderful previous production does not foster a brilliant following one. Perhaps the problem was that this production's lead character is a bit too long in the tooth and energetically challenged. As a player, he was less comedically flexible rather than just utterly fumbling.

Character originator Tony Award winner mid30s James Corden's hyperenergetic, funny fat man doing physical comedy portrayal couldn't be approached by Casey's 50something self-satisfied exasperation. Mugging to the audience only works sometimes. It didn't seem to work here much at all. His pregnant pauses were all stillborn.

Alejandro Simoes' Alan portrayal was superseded by his terrible Prince Valiant wig. His awful overthetop acting as an overthetop actor was distracted by the bad hair day. Tiffany Chen's Pauline Clench, Alan's onagain/offagain/onagain girlfriend, was just annoying rather than funny.

Also, though well intentioned, early on the rhythm and texture of this production seemed cacophonous rather than melodic. This actually starts before the show begins with a supposedly early 1960s pop tune crooned and animatedly performed by a trio that is overwhelmed by the instrumentalists in the stage band. The lyrics nor the guitar could be heard.

Often too loud, the music simply seemed out of sorts. Certainly, a Skiffle Band would have been more appropriate for the pre-Beatles era music. Skiffle is a type of popular music that included pop music, jazz, folk and even blues influences. It was usually produced with homemade or improvised instruments. Popular in the UK in the 1950s, it played a major part in the early careers of later prominent jazz, pop, blues, folk and rock musicians.

Though there was a verbal reference to someone playing cymbals with their knees, the music in this show was not quite right. Even English buskers (street musicians) would have fit better. The raucousness of the English Music Hall tradition would have given character and even nuance to the show as well.

The English Music Hall was a variety entertainment that ran from about 1850 to 1960. It was loud, brassy and schmaltzy with much give and take from the audience with the performers. There were always familiar sing-a-longs.

Audience participation was strong. Physical comedy or slapstick was a prominent aspect of the comedians. Music reflected popular culture as well as nostagia. Charlie Chaplin was a product of English Music Halls. Instead of the mishmash of songs in this production, a music hall vibe would have greatly helped to strengthen this show.

Opportunity was lost with the sets as well. The apartment/flat was too spacious while the Brighton seaside restaurant was too tight. The slamming hotel doors had none of the dance sequence of the very silly but funny Noises Off. Where were the Victorian white gazebos in Brighton, a beach chair or three or even a couple of seagull screeches? This noparticularwhere added to the strange spinning compass approach of this production.

To be fair, the second act was far more coherent and better than the lumbering yawn-evoking first act. And there were several very good performances by supporting actors. Also, there were attempts at audience participation. However, this One Man, Two Guvnors was an example of when less is just less.

From this, it is greatly hoped that the Lyric Stage Company's 40th Anniversary goes on to one future triumph after another.