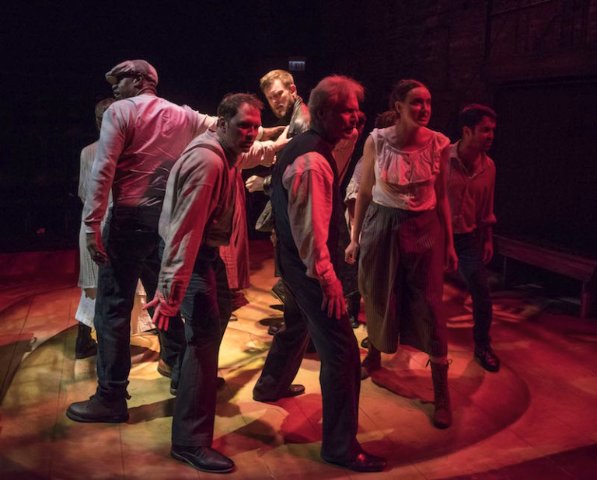 Schad (center) and the cast. Photo by Michael Brosilow.

Dostoyeksky’s Crime and Punishment is a thriller, a slow-paced intellectualized thriller. If you haven’t read the novel since college days, Chris Hannan’s 2013 adaptation—on stage at Shattered Globe Theatre—will sneak up on you. Louis Contey directs his 23rd production for Shattered Globe. Contey’s direction is sure and fluid; he makes the play almost choreographed in its physicality. However, the production lacks the tension we should feel over the crime and its eventual punishment.

Crime and Punishment is the story of Rodion Raskolnikov or Rodya (Drew Schad) and his neighbors who live in a St. Petersburg slum. Men have trouble finding work and young women sell themselves as prostitutes to support their families. Raskolnikov, one of the most famous characters in literary history, is a sickly, poverty-stricken former law student, trying to keep himself together and pay his rent so his landlady won’t throw him out.

His interior monologues in the novel become thoughtful speeches to the audience in Hannan’s beautifully adapted version. The famous inner monologue is about criminal psychology—whether a great man has the right to murder—whether or not the act might enable him to do good deeds. Rodya is plotting to murder and rob Alyona Ivanovna (Daria Harper), the pawnbroker to whom he sells small articles. He brutally murders her and her sister but the proceeds of the robbery are disappointing.

Rodya’s mother Pulkheria Alexandrovna (Daria Harper) and his sister Dunya Romanovna (Christina Gorman) arrive from the provinces to visit him. Throughout much of the play, Dunya shadows her brother, as if she is his conscience.

Later Rodya and his friend Razumikhin (Joseph Wiens) go to see the police magistrate Porfiry Petrovich (Patrick Thornton) and his aide Ilya Petrovich (Christopher Acevedo). Rodya wants to confess that he visited the pawnbroker a few days before the murder but does not confess to the murder. Petrovich confronts Rodya with an article he wrote at university, arguing that the extraordinary man has the right to break the law, “for the benefit of mankind.” Eventually Raskolnikov is found guilty of the murders and sentenced to 20 years of hard labor and ordered to walk the 1500 miles from Petersburg to Siberia. Petrovich concludes his sentence this way: “Everybody wants to change the world. Nobody thinks to change himself. In Siberia there is no world to change. It’s Siberia.”

Schad gives a fine, nuanced performance as Rodya. We believe he is troubled and wrought by angst about his actions. Harper and Gorman are also excellent as his mother and sister and Wiens gives his usual fine performance as Rodya’s loyal friend. The simple set design (by Nick Mozak) makes good use of a few pieces of furniture and creative use of a door. Lighting is by Shelley Strasser and costumes by Hailey Rakowiecki. The original music by Christopher Kriz perfectly sets the mood for each scene.

The play features some dialogue reminiscent of the Russian intellectuals of the mid-19th century, dramatized brilliantly in Tom Stoppard’s 2002 trilogy, The Coast of Utopia, produced at Lincoln Center in New York in 2006-07, but never, unfortunately, staged in Chicago. Fyodor Dostoyevsky’s novel was first published in 12 installments in a literary journal in 1866, after he had served 10 years in exile—four years in a Siberian prison and six years in the military. (His crime? Discussing banned books that were critical of the tsarist regime.)

Crime and Punishment by Shattered Globe Theatre continues at Theater Wit, 1229 W. Belmont Ave., through October 20. Performances are Thursday-Sunday. Buy tickets for $39 here; some discounts are available. The play runs two hours and 40 minutes (with one intermission).